Poachers may be taking alligator snapping turtles, which can bring $10,000 each 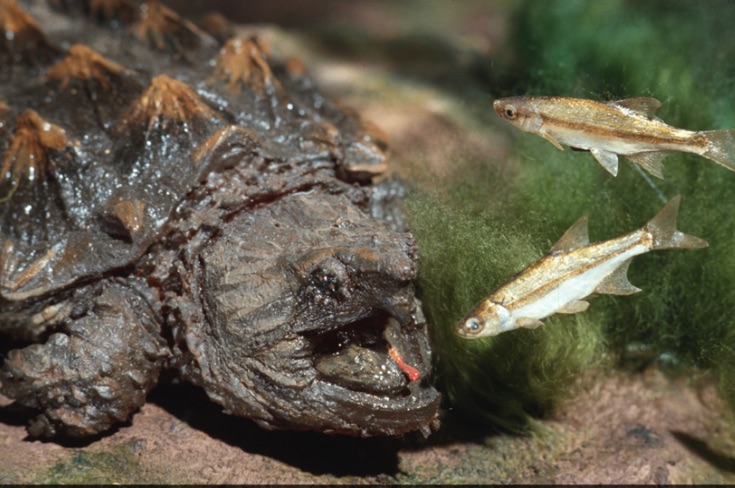 Poachers may be to blame for the slow recovery of alligator snapping turtles in Georgia, according to the Georgia Department of Wildlife. 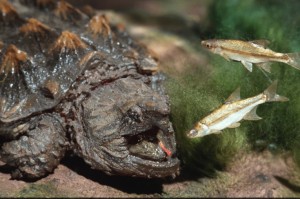 Alligator snapping turtles are carnivores that lure prey with a protrusion from their tongue. Credit: amnh.org

Wildlife researcher Rachel King reported that people she met on the Flint River during her survey of snappers last summer complained about the turtles being protected. They told her snappers are good to eat, according to a DNR statement.

“I feel there definitely needs to be a little more education about the ecology of this species,” King said in the statement.

In addition, fresh water turtles became a popular prey after the U.S. banned the harvest of sea turtles in 1978. Alligator snapping turtles were especially attractive because they move very slowly and can weigh up to 200 pounds.

And they bring a high price – snappers weighing more than 100 pounds have been sold for up to $10,000 each on the black market, according to a report in the Houston Chronicle

King’s work was spurred by a petition to list snappers under the U.S. Endangered Species Act. DNR’s Nongame Conservation Section commissioned the survey.

The petition was filed in 2012 by Tucson-based Center for Biological Diversity. The center ramped up its pressure in April 2014 by notifying the U.S. Fish and Wildlife Service that alligator snapping turtles are even more rare than previously thought. 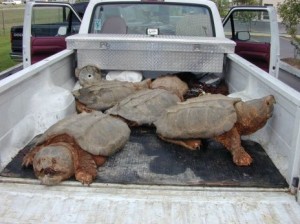 Poachers caught these alligator snapping turtles, but were apprehended before they could sell the turtles. Credit: chron.com

That’s because the center’s research showed the snappers are actually three separate species. Researchers found differences in the back part of the shell. Snappers in the Suwannee River have a notch about four inches long. The notches in the other two species are much smaller.

King conducted a headcount of alligator snapping turtles along the Flint River from May through September, 2014. King found only a marginal increase in the population of snappers, compared to the most recent survey which was conducted in 1989.

King used a hoop net baited with cut fish. The headcount was conducted in the main Flint River from the town of Salem, in Upson County, to Lake Seminole, near Bainbridge, in Decatur County, near the Florida border.

Alligator snappers have no predators other than humans, who have hunted them to the point that snappers now are a threatened species, according to nationalgeorgraphic.com.

In Georgia, thousands of snappers were harvested in the 1970s and 1980s. One trapper said his average daily catch was about 1,000 pounds, according to the DNR statement. Responding to the population drop, Georgia declared alligator snapping turtles a threatened species in 1992.