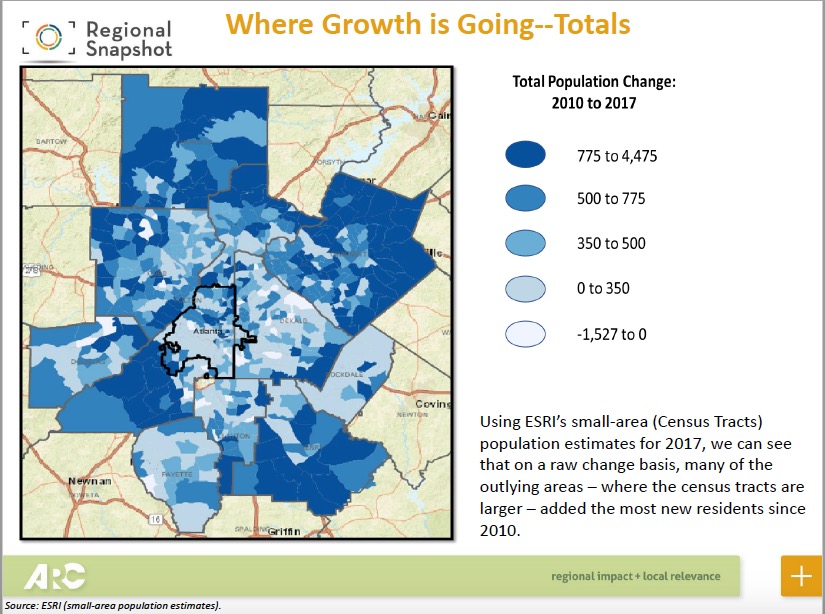 The 10 counties of metro Atlanta together have absorbed enough new residents to fill a good-sized city in just a year, according to a new estimate.

Metro Atlanta’s population rose by 78,300 people in the year to April 1, 2017, according to the Atlanta Regional Commission — that’s more people than the U.S. Census says live in Alpharetta. 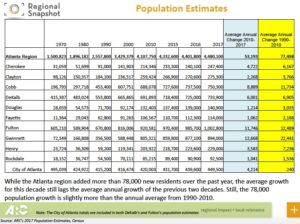 A page from ARC’s presentation of 2017 population estimates. Click to view full presentation. Click for a large version. Credit: ARC

The ARC is an intergovernmental coordination agency that studies a 10-county metro area. (Full ARC presentation).

He said the ARC’s estimation method is a little more conservative than that of the U.S. Census — and has been closer to the decennial Census results.

The city of Atlanta grew too, though its population is still lower than it was in 1970.

About a year into President Richard Nixon’s first term, some 495,039 people lived in the city of Atlanta. The city limits are substantially the same today as then, but as of 2017, the city’s population has yet to catch up with the days of bellbottoms. As of April 2017, about 449,500 people live in Atlanta itself.

Even adding an Alpharetta, the average annual growth rate in the region over the last seven years is lower than in the years from 1990 to 2010. So while population in the region is growing, the climb isn’t as steep as it was around the turn of the millenium. 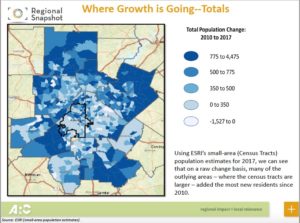 The 10-county metro is about three times more populous than in 1970. Then, about 1.5 million people lived in the region. Now, it’s almost 4.5 million.

That means about as many people live in the 10-county Atlanta region as live in all of Kentucky, according to a 2016 U.S. Census population estimate of the state.

The city of Atlanta’s commissioner of Planning and Community Development, however, has said Atlanta’s population could double in the next 15 years and the city has started preliminary planning for that kind of growth.

The ARC makes the regional population estimates annually in order to calculate dues for its member counties and the city of Atlanta.

An ARC committee unanimously approved the estimate on Thursday. The full ARC board will hear the population estimate later in August; their vote would mean its official adoption.