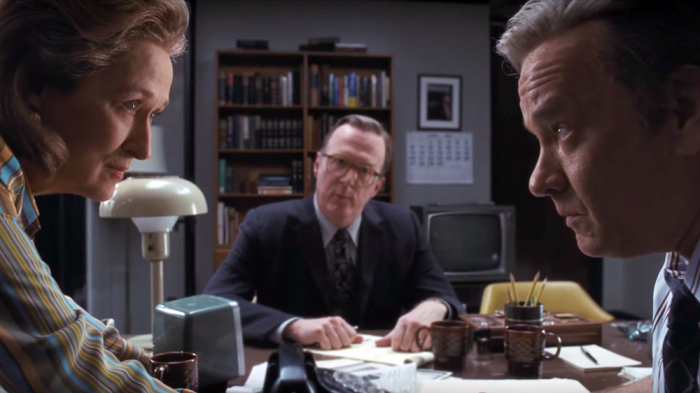 The man who made us believe in man-eating Great Whites, homesick extraterrestrials and re-booted dinosaurs now wants us to take a real leap of faith.

Steven Spielberg wants us to believe in newspapers.

“The Post,” as in the Washington Post, is in many ways the sort of rousing old-fashioned newspaper movie they used to make in the ‘40s and’50s.  Tough-talking editors with rolled-up sleeves. Deadlines stretched to the breaking point. Hard-boiled reporters for whom dirty tricks are just business as usual when it comes to getting the story. 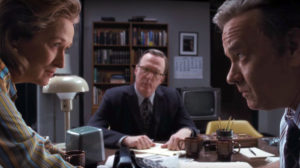 Speaking of which — dirty tricks, that is — Watergate changed everything.
After Redford and Hoffman — I mean, Woodward and Bernstein — if you worked at a paper, you were part of a rogue’s gallery of heroes, as likely to bring down a President as cover a school board meeting.

In part, “The Post” is a celebration of the days when papers mattered, when read “all about it” was a rallying cry, not a musical number in “Newsies.”   The film also, very deliberately, draws a knowing parallel between the Nixon era, with its enemies list and anti-media biases, and what we have on our hands today.

However, the subject here isn’t the Watergate scandal, but a kind of run-up to it. In 1971, a military analyst named Daniel Ellsburg leaked thousands of documents, collectively known as the Pentagon Papers, which exposed the uncomfortable fact that, for decades, government officials knew the Vietnam War was unwinnable. Yet they still sent young men off to die. (Nixon is just the last name in a line that goes back to Harry Truman).

The New York Times is the first to publish the story, but the Post isn’t far behind. And when the Times is faced with an injunction, the Post takes up the gauntlet, risking its very existence to pursue the truth. That also means risking jail time for its ladylike publisher, Katharine Graham (Meryl Streep), and her combative managing editor, Ben Bradlee (Tom Hanks).

Graham is somewhat new to the job and obviously not yet comfortable.

Though her family owns the Post, her father passed the reins of leadership to her husband, Phil — as, frankly, would have been expected back then.

Women hosted parties for the powerful; they weren’t supposed to be powerful themselves. In an early scene, a dinner at Graham’s tony Georgetown mansion ends with the ladies “retiring” to another room to talk about, well, “lady” stuff while the men — including the current Secretary of State, Bob McNamara — discuss how the world should be run.

But Phil is dead (sadly, a suicide) and Graham is now in charge. Or rather, to the phalanx of men surrounding her see her, she’s the figurehead, decked out in attractive, slightly matronly outfits, who tries not to look too panicked whenever she’s supposed to voice an opinion (thankfully, not too often).

And it is Spielberg’s portrayal of her story that expands “The Post” beyond an expertly done, lightning-fast saga of good-guy journalists vs. bad-guy politicians. It’s why the movie is called “The Post” and not “The Times.”

True, Spielberg and his screenwriters are intoxicated by the heroic age of newspapering — be it a reporter feeding a pay phone with every piece of change he’s got or Bradlee and company sweating out a deadline, waiting for a go-ahead so the presses can start rolling.

But they are equally committed to Graham’s personal journey — to how a power hostess became a powerhouse. And Spielberg isn’t worried about overplaying his hand. Yes, a scene where Graham walks through a crowd of admiring women gathered outside the Supreme Court is not exactly subtle.

But then, neither was the culture that routinely dismissed all these women, relegating them to assistants and secretaries and go-fers while men got on with the real business of running things.

Subtlety comes in Streep’s exceedingly capable hands. In her slight hesitations, her furrowed-brown deference, her sense that she’s some place she doesn’t belong.  She’s much more comfortable fetching her granddaughter’s ball than confronting a dismissive board of directors or arguing with Bradlee about doing the right thing.

Hanks is fine, too — though you do wonder if he’s doing Bradlee or Jason Robards as Bradlee. So is a flotilla of supporting players (from Sarah Paulson to Bob Odenkirk).  Plus, there’s Spielberg’s period-details playfulness. Notice how he loves to show the painstaking way newspapers used to be produced; how he delights in the sickly blue light — and unbelievable slowness — of a copy machine, circa 1971.

“The Post” turns out to be deceptively subversive move. Yes, it’s big and glossy, with big glossy stars and a big glossy director. But it has the fierce heart of a battling indie picture, one that demands we look at what’s been right in front of us for decades, but, perhaps, some of us didn’t want to see.