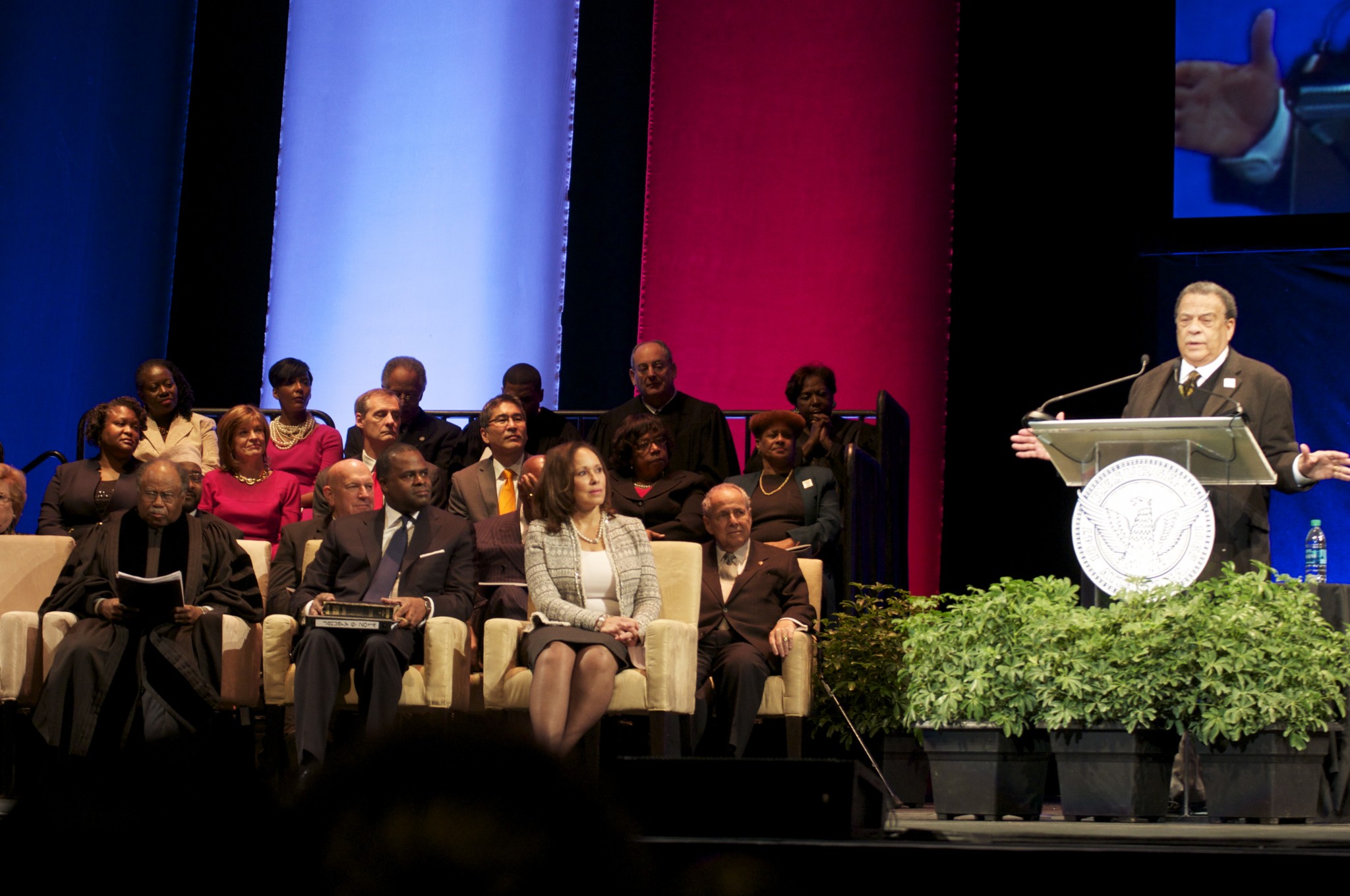 The Houston-based company negotiating to buy the Atlanta Civic Center property has a market cap of $4.05 billion, a regional office in Dunwoody, and has been developing shopping centers and other commercial real estate since 1948 – all of which indicates the company has the wherewithal to create a game-changing development on the northern end of downtown Atlanta. 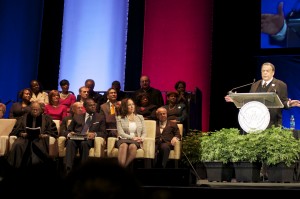 The final mayoral inauguration to be conducted at the Atlanta Civic Center may be that of Mayor Kasim Reed’s second inauguration, where on Jan. 6, 2014 former Mayor Andrew Young introduced Reed. File/Credit: Donita Pendered

Weingarten Realty Investors owns or operates under long-term leases 14 commercial properties in metro Atlanta, according to Weingarten’s 2014 end-of-year corporate filing with the Securities and Exchange Commission.

Some are scattered just north of I-285, in Powder Springs, Dunwoody, and Duluth. Others are located in Dallas, Acworth, Alpharetta, Roswell, Grayson, Suwanee, and Gainesville. Weingarten oversees Camp Creek Marketplace II, in Atlanta.

Weingarten’s two major tenants are Kroger, the grocery store, and TJX. TJX is an off-price apparel company of retailers including T.J.Maxx, Marshalls, Winners, HomeGoods, T.K.Maxx, A.J.Wright, and HomeSense, according to Weingarten’s SEC filing.

The Civic Center property will be the company’s first major push into Atlanta’s urban core, presuming the deal closes. The redevelopment fits into Weingarten’s stated goal to diversify its holdings beyond Texas: 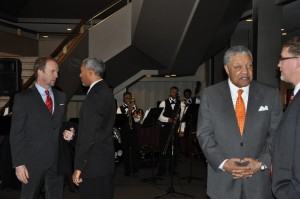 At what may be the last mayoral inauguration at the Atlanta Civic Center, of Mayor Kasim Reed in 2014, then Fulton County Commissioner Robb Pitts (second from right) announced his candidacy for Fulton County chairman’s post. Then Invest Atlanta’s president/CEO Brian McGowan (left), now EVP/COO at the Metro Atlanta Chamber, chats before the inauguration. File/Credit: Donita Pendered

The Georgia portfolio represents 5.9 percent of Weingarten’s total gross leasable area. That puts Weingarten’s footprint in Georgia about the same size as its holdings in North Carolina and Colorado, according to SEC filings.

At the Civic Center site, Atlanta is proposing to sell Weingarten about 19 acres and the structures for $30 million.

Although details are still to be ironed out, the framework for the deal at this time envisions Weingarten developing a $298 million project at the site that offers:

The resolution calls for Weingarten to set aside as affordable units 10 percent of all rental units in multifamily buildings. The income threshhold is 80 percent of median income in the metro Atlanta area as defined by the Census.

The resolution does not mention any public funds Weingarten may request from the city to pay for the development. No preliminary site plan was made public.

The site of the Boisfeuillet Jones Atlanta Civic Center has languished for decades. It’s at the corner of Piedmont Avenue and Ralph McGill Boulevard, on the northeastern fringe of Atlanta’s central business district.

The facility was built in 1967 during one of Atlanta’s “urban renewal” phases, and it construction helped disrupt a black neighborhood named Buttermilk Bottoms. Former residents and their descendents still gather periodically to renew their shared history.

Twenty years after the center was built, Atlanta developer Charlie Ackerman thought the 19-acre site could be developed with more density. Plans didn’t come to fruition. Twenty years after that, in 2006, then Mayor Shirley Franklin approved a plan to market the property for redevelopment, but the city found no takers on the brink of the Great Recession.

The board that oversees Invest Atlanta, the city’s development authority, seems confident Weingarten can help turn the corner on the Civic Center property.

“While final plans are still being negotiated, Weingarten’s vision for the site and their approach to redevelopment aligned best with the City’s vision and goals for the site,” the board said in a statement released after the board voted Sept. 17 to authorize the city to execute an option with Winegarten.

Lobby of the Atlanta Civic Center by Kelly Jordan