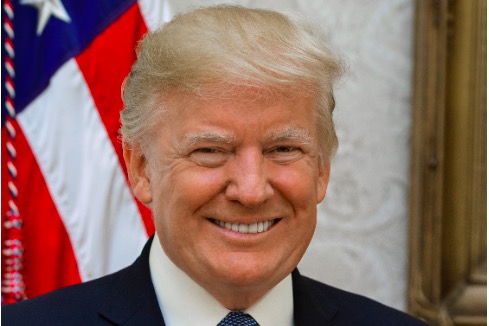 President Donald Trump made an endorsement that may prove pivotal in a tight race: Republican Georgia gubernatorial hopeful Brian Kemp has his support.

“Brian is tough on crime, strong on the border and illegal immigration. He loves our Military and our Vets and protects our Second Amendment,” Trump tweeted on Wednesday afternoon.

The whole tweet is a valuable statement for Kemp in a contest with Lt. Gov. Casey Cagle for the Republican nomination in this year’s governor’s race.

Kemp and Cagle are in a statistical tie, according to an early July poll, which gave Kemp 44.4 points to Cagle’s 41.1.

In that poll, being a “stronger supporter of Trump” was the most important vote-deciding factor for 17 percent of likely GOP primary voters. The poll was conducted by the University of Georgia for the Atlanta Journal-Constitution and WSB-TV. The poll counted 769 respondents and has a margin of error of 3.5 percentage points.

The Trump endorsement for Kemp came a day after Cagle’s campaign got the endorsement of a very popular Gov. Nathan Deal. 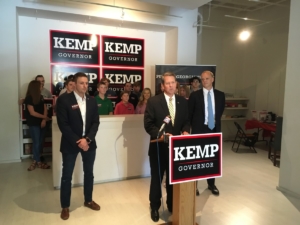 Gubernatorial hopeful Brian Kemp at his Buckhead campaign office on Wednesday, ahead of the Donald Trump tweet. Credit: Maggie Lee

Between them, Hill and Tippins took about 30 percent of first-round votes.

Kemp said he was honored to have the support of both.

Tippins’ and Hill’s endorsements come as little surprise in the light of what Cagle said to one about the other on a tape.

That secret recording documents Cagle explaining to Tippins why as lieutenant governor he ushered a “bad” bill through the state Senate. It was to hurt a rival in the gubernatorial race. That rival was Hill. Tippins released part of that tape a few weeks ago and more clips have come out since.

Tippins, endorsing Kemp, said the GOP needs a leader that can unite the party and carry forward conservative values.

But even this is only the second round of voting. There’s still the general election in November, when either Kemp or Cagle will face Democratic nominee Stacey Abrams.

Any tight Trump association might be less valuable in the general race than it is in the primary to the eventual Republican nominee. If the president is anything, he’s polarizing and may drive Democrats to the polls as much as Republicans.