The landscape of public transit has become clearer in metro Atlanta and elsewhere in Georgia, at least for the next year – not much will change. 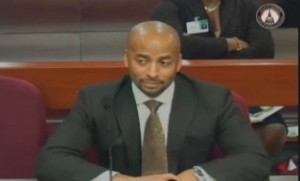 The state Senate gave new MARTA GM Keith Parker a year to make his mark on the agency before it will consider proposed changes to the 1965 MARTA Act. File/Credit: State of Georgia

The state Senate essentially gave MARTA’s new GM, Keith Parker, a year to get settled into the job and devise plans to curb costs and raise revenues. The Senate stalled expansive legislation, which the House had approved, to privatize segments of MARTA and otherwise retool its board and operations.

Gov. Nathan Deal prevailed in his effort for the state to fund Xpress, the regional bus service overseen by GRTA. Finally, the planning process continues to advance for helping people take public transit to their medical appointments, and other critical destinations, in metro Atlanta and throughout Georgia.

All that said – nothing is settled about transit’s long-term future.

However, outward appearances of status quo will prevail until the Legislature reconvenes in 2014. And there’s an idiom to the effect of: “Better the devil you know.”

MARTA’s costs are 10.2 percent lower than the amount in the current budget, which means the system could end its fiscal year with a relative surplus. Credit: MARTA

The MARTA proposal, House Bill 264, initially was presented as a sweeping rewrite of the MARTA Act of 1965. The plan sailed through the House and fell flat in Senate. No public explanation was provided. The sponsor, Rep. Mike Jacobs (R-Brookhaven), who chairs the Legislature’s MARTA Oversight Committee, offered a number of concessions before announcing plans to push for passage in the 2014 session.

One sweetener contained in the bill was an end of the funding formula known as the 50/50 split. The formula requires that MARTA spend 50 percent of its sales tax revenues on operations, and the other half on capital improvements. The Legislature had granted a three-year waiver, which ends in June, to enable MARTA to use a greater proportion of its sales tax revenues to pay for operations.

But it’s not entirely evident what effect the renewal of the requirement will have on MARTA’s budget for maintenance and operations.

Gov. Nathan Deal provided funding for Xpress bus service in a way that may enable Xpress to be funded routinely by the state in future years.

On one hand, MARTA has been covering projected shortfalls by drawing down its rainy day fund – a practice that MARTA’s management consultant observed can’t last forever. Not to mention that sales tax revenues aren’t what they were before the Great Recession.

On the other hand, MARTA’s budget variances have been trending in favor of MARTA. The variance is 10.2 percent favorable, which MARTA attributed to “labor, contractual services and fuel costs” over the first seven months of its fiscal year, which began July 1, 2012.

The governor’s attention to Xpress will help keep buses on the road through June 2014.

Deal’s team was able to secure the entire $8.7 million contained in the governor’s initial budget proposals. The sum includes $567,000 in additional funds to maintain service through June, as well as $8.1 million in the FY 2014 budget that begins July 1.

A significant development for Xpress funding is that Deal inserted the $8.1 million in such a way that Xpress is more likely to become a fixture in the state budget. Until now, Xpress was funded only through surplus funds that become available half-way through the state’s fiscal year, which begins July 1. Because of Deal’s action, the line item for Xpress service now appears in the state’s yearlong budget. 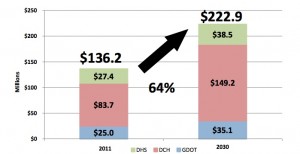 The cost of helping needy rural Georgians get to critical destinations is expected to rise by 64 percent in 2030. Credit: Governor’s Development Council

The state has provided limited funding, through its supplemental budget, to help Xpress cover shortfalls that result from reductions in anticipated federal funding and payments from metro Atlanta counties.

Even at that, the governor’s allocation won’t go very far. Xpress is expected to require almost $200 million over the next decade, in operating and capital expenditures. But the $8.1 million does mean that commuters in 12 metro counties are supposed to have access to some level of service from the regional bus system – at least through June 30, 2014.

GRTA reports that Xpress buses take 1.5 million cars a year off the roads, and had 2.4 million boardings in 2012.

Regarding a program with the name “human service transport”, both GRTA and the Atlanta Regional Commission are meeting requirements to plan for providing service to the elderly, disabled, and low-income. 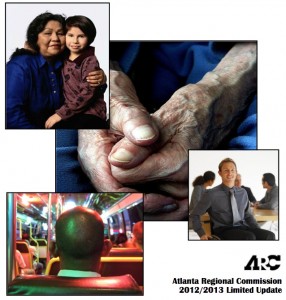 The Atlanta Regional Commission has completed an update that will enable the region to continue helping needy residents of metro Atlanta get to critical destinations and enjoy a better quality of life. Credit: ARC

GRTA is actually doing the work in its role as the Governor’s Development Council. By law, the council is required to devise a transit system to enable the state to help the state’s elderly, disabled and low-income residents get to essential appointments such as health care, education and work.

The current system relies on a patchwork quilt overseen by three state departments – community health, human service, and transportation. The current cost of transporting needy Georgians is about $136 million a year. The cost is expected to rise by 64 percent in the year 2030, to about $222 million a year.

The state anticipates that it won’t be able to maintain the current program, and has charged the council with devising a new system. The system is likely to take the form of a coordinated network that’s funded by the three departments, rather than have each department run its own system.

The ARC met its mandate to update its plan for human services transport in metro Atlanta.

The update is largely technical in nature, but is essential for service to continue to these residents – and the numbers are large: