Georgia and Atlanta leaders welcomed what they hope will be their next Fortune 500 company headquarters to Atlanta Thursday morning.

Gov. Nathan Deal and Atlanta Mayor Kasim Reed welcomed Richard Dugas Jr., the chairman, president and CEO of PulteGroup, to Atlanta at the location of its new headquarters a year from now.

PulteGroup is moving its corporate headquarters from Bloomfield Hills, Mi. in the Detroit area to the Capital City Plaza building right next to the MARTA Buckhead station.

In an interview after the welcoming event, Dugas said the PulteGroup used to rank as high as No. 250 in the Fortune 500 list, but then came the housing fall-out during the Great Recession in the late 2000s, and its business suffered along with other homebuilders.

And that helps explains why the PulteGroup decided to relocate its corporate headquarters outside of the Midwest to the Sun Belt.

“In 2012, the Southeast accounted for 37 percent of the homes that we closed and 43 percent of our invested capital,” Dugas said. “The total Midwest markets going back 20 years ago represented just under 30 percent of our business, and today it’s a little less than 10 percent.”

Dugas said it made sense to move the company to where it sees the greatest growth opportunities.

“We wanted to pick a location that would be closer to our investments and closer to the customers that we serve,” Dugas said. “The Sun Belt continues to grow aggressively, and it’s more convenient when we visit projects.” 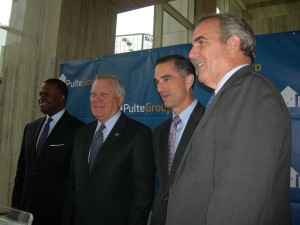 The corporate headquarters will employ about 320 people, Dugas said with about half relocating from Michigan and the other half being hired in the Atlanta area.

When the PulteGroup announced earlier this year that it was moving its headquarters out of the Greater Detroit area to Atlanta, the news was not well received.

Dan Gilbert, founder of Quicken Loans and owner of the Cleveland Cavaliers NBA team, actually wrote in a late night tweet when the move was announced that Dugas was a “punk” for making that decision.

He followed that up in an interview in the (Detroit) Free Press with the following quote: “Let’s put it this way. When a guy is willing to move the headquarters of a 63-year-old Michigan-based company in the middle of the night, basically, without even consulting with the founder’s family, I think that pretty much speaks for itself. The words in the tweet are pretty appropriate.”

Dugas said he can understand why people were so upset.

“It was a business decision,” he said. “I don’t take anything personally. At the end of the day, Pulte continues to have a large investment in Michigan.”

And Dugas said that the company’s founder, Bill Pulte, is a “first-class gentleman” who told him that he would support him and his decision to move the PulteGroup “if it is good for the company.”

Actually Dugas grew up in southern Louisiana. He joined the PulteGroup in 1994. He did move to Atlanta (actually Duluth) in 1996 and lived here until 2002. But that’s not why the PulteGroup ended up deciding to move its headquarters to Atlanta.

“We did not move the company because it was where I wanted to live,” Dugas said. “We had a very objective process (that included all sorts of criteria scored by a team of executives). At the end of the day, the team was unanimous in selecting Atlanta.”

But Dugas did add: “I make no apology that I loved living in Atlanta.”

Although the company has not yet completed its relocation, Dugas has already bought a home in Buckhead, and his family will be making the transition from Detroit to Atlanta over the next year or two.

Dugas also was excited that the company will be based right next to a MARTA station.

“I frankly think we have the best location in Buckhead,” he said. “It would not shock me if 50 percent of our workforce ends up taking MARTA to work every day.”

Meanwhile, Dugas is focused on making sure that the PulteGroup takes full advantage of the recovering housing market. Although it is still building suburban subdivisions, it is broadening its portfolio to include more urban, infill developments.

The Metro Atlanta Chamber as well as the mayor and governor pledged to do all they could to help the PulteGroup grow its business.

As Gov. Deal said: “You will be in the top 500 corporations in the United States just by coming to Georgia.”