Atlanta Mayor Kasim Reed’s office announced Thursday that the mayor has created an Office of Entertainment to oversee the film industry, in accordance with an ordinance approved July 1 by the Atlanta City Council. 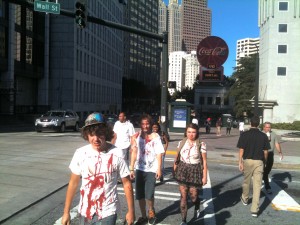 Extra in a zombie series filmed in the Fairlie-Poplar district of downtown Atlanta go home after work in October 2011. Credit: David Pendered

The announcement came one day after the council’s Finance Committee approved legislation that would require the new office to report a total of at least seven times a year to two of the council’s standing committees – finance and community development.

“While we support the film commission, we want to make sure that … it is done in a way where we are all on the same page,” said Councilperson Joyce Sheperd, the lead sponsor of the council’s proposal.

The full council is expected, at its July 15 meeting, to refer the oversight legislation to the Community Development Committee for further consideration. Specifically, the council’s plan – which was signed by 14 of the council’s 15 members – calls for the following:

The council has been trying since at least 2011 to figure out how to handle a variety of issues associated with what’s generically called the film industry. Sheperd and Councilperson Michael Julian Bond proposed a commission to oversee the industry, but they ultimately decided not to pursue that route.

Two particular concerns involve access to jobs the industry brings to the city, as well as the cost and inconvenience of having public rights-of-way taken over by actors and film crews.

Instead of creating a commission to review the issues, the council created the Office of Entertainment and placed it within the Department of the Mayor. Evidently, the legislation needs to be tweaked so that they council retains some degree of oversight – at least in the eyes of 14 council members.

Sheperd characterized the accountability as intended to ensure that the office is appropriately handling the issues created by the film industry when it’s at work in Atlanta.

“We just want to talk to mayor’s office about a process of reporting structurally about how they are going to set this film commission up,” Sheperd said at Wednesday’s meeting of the Finance Committee. “How, from public works to every entity, how it will be implemented, and report back to us what’s going on in terms of that.”

The announcement released Thursday by the mayor’s office did not name a director, nor interim director, of the new office.

The statement provided scant details of how the office will function, other than to paraphrase language that appears similar to that in the legislation. The office is to streamline the permitting process and be responsible for:

Reed said in the statement:

“The film industry creates a range of well-paying jobs for residents and introduces a major new revenue stream for local business owners. In addition, the Office of Entertainment will help coordinate productions to minimize neighborhood disruptions. I am especially pleased that new film, television and video projects will enhance our city’s cultural milieu by bringing and developing talent from across the film industry. This is yet another example of why Atlanta remains the cultural and economic center of the Southeast.”