This story has been updated

The role of local politics in regional transportation planning emerged Wednesday at the Atlanta Regional Roundtable, which is devising a project list that would be paid for with a proposed 1 percent sales tax.

Three major amendments were formally introduced, and each involves transit. A fourth proposal, involving Atlanta’s BeltLine, would complete a planned East-West connection through the city, along North Avenue, in order to link two proposed segments of the BeltLine with a streetcar.

Here are the highlights of proposals involving Atlanta, Clayton, Cobb and DeKalb counties. The roundtable is to consider the matters presented by the counties at its meeting Oct. 6:

Atlanta intends to shift the use of sales tax dollars for a new streetcar from the western segment of the East-West connection to the eastern side. The western segment would be paid for with proceeds of an existing Tax Allocation District.

Clayton County proposes to provide commuter rail service from Atlanta toward Macon, with a funding source to be delivered to roundtable staffers by the close of business Friday.

Cobb County proposes to reduce funding for a transit line to be built from MARTA’s Arts Center Station to the Cumberland Mall area. The money would be diverted to provide bus service from the Town Center area to Arts Center station, and to improve three intersections of Windy Hill Road, from I-75 into west Cobb.

Look over the concrete wall to see traffic backed up on I-20 West for the morning commute into DeKalb County, just east of I-285. Credit: David Pendered

DeKalb County proposes to increase funding for transit along I-20 East, and pay for it by reducing planned improvements to the intersection of Ga. 400 and I-285.

In each case, the proposals respond directly to comments from the public that have been gathered since the roundtable approved a draft list of projects Aug. 15.

MARTA General Manager Beverly Scott said amendments of some sort have always been expected. Scott doesn’t serve on the roundtable, but has been providing technical advice.

“A candid conversation is taking place,” Scott said after the meeting. “Elected officials are responding to their constituents. 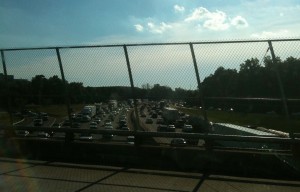 Afternoon rush-hou traffic backs up on I-285 beneath the Ga. 400 overpass. Credit: David Pendered

“The problem everyone faces is that there is so much pent-up demand and the issues are so severe that everyone wants their project to be in the first tranche,” Scott said.

Reed portrayed the change involving the streetcar as a minor technical issue. The proposal doesn’t affect the completion of the project, just the source of money to pay for it, he said.

The politics involve the compelling need to advance a project that was started about five years ago by former Atlanta Mayor Shirley Franklin. Many affected residents are looking to Reed’s administration to deliver the public parks and transit that were envisioned before the recession choked off the private development that is to create the tax base to pay for public amenities.

The commuter rail line is especially valued in Clayton, in part because its backers think it would bolster economic development in a county that was hit hard by the recession.

Bell said he has been advised that Clayton needs to “have some skin in the game.” Bell said he and other county officials will decide by Friday what that skin will be.

The Cobb amendment is not intended to doom the proposed transit line to the Cumberland area, Lee said after the meeting. Federal transit officials have told Cobb officials that the line would remain eligible for federal funding at the lower local match, he said.

The politics of the amendment address the reality of gridlock along the I-75 corridor. The politics also address concerns that there is no plan for how the additional transit to be created through the sales tax is to be governed, Lee said. And there’s the matter of Lee’s expected challenger in the next campaign, former Cobb Chairman Bill Byrne, making an issue of Lee’s service on the roundtable (service that was mandated by state law).

Gov. Nathan Deal has appointed a committee to examine the governance issue. The Legislature’s committee that oversees MARTA also is considering suggesting changes in the way state law allows MARTA to operate.

Many Cobb residents have said the I-75 corridor is their most pressing need for transit, because it links the densely developed residential and commercial areas of North Cobb with the job centers near Cumberland and east toward the Perimeter Center business district.

Windy Hill Road is an artery that connects the I-75 corridor with two major North-South arteries – U.S. 41 and South Cobb Drive—and provides access to west Cobb, which is another densely developed residential area.

In DeKalb, the Board of Commissioners has pressed hard for transit service along I-20 east. The board unanimously approved a resolution Tuesday that calls for funding to build a transit line, rather than just establish the stations that are in the current proposal.

Fulton Chairman John Eaves sharply protested Ellis’ proposal to pay for the transit line with money to be cut from the Ga. 400/I-285 intersection improvements. Ellis noted that he made that recommendation on his own. The resolution approved by DeKalb’s board did not suggest a source of funds, as the roundtable requires of any amendment.

In other news, the cost of managing the $6.14 billion worth of regional projects does not appear to be a problem. Earlier, indications were that the cost of program management could approach $250 million. Some projects likely would have been cut to come up with money to cover administrative costs.

Gwinnett County Chairman Charlotte Nash said most of the projects on the list already include amounts needed to administer each of them. Nash is overseeing a committee that’s examining the technical aspects of managing a public works project that would be the largest in the region’s history.