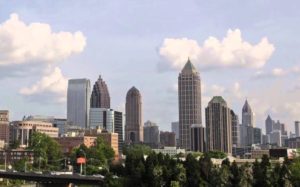 Metro Atlanta’s high tech sector has received a positive review in a new report from CBRE, which may be helpful in the state’s quest to convince Amazon to locate its second U.S. headquarters in the region.

Rising office rents in Midtown pushed the submarket to the highest rates in the region, largely due to increasing demand from high tech companies to locate there, according to a new report by CBRE. Credit: wdanielanderson.files.wordpress.com

Metro Atlanta is attracting so many high tech jobs that it’s driving up the price of office space, especially in Midtown. Metro Atlanta ranks 3rd in the United States and Canada for price hikes over the past two years that are attributable to the influx of high tech firms, according to CBRE’s report.

The report appears to affirm growth rates in the sector that are illustrated by just the city of Atlanta bringing in more than 6,000 technology jobs since the start of 2016, as reported in September by Eloisa Klementich, president and CEO of Invest Atlanta, the city’s development arm.

These qualities help ensure that metro Atlanta typically makes the list of pundits who rank the regions that have a realistic chance of winning the Amazon HQ2. That’s as in Headquarters No. 2, after the Seattle campus.

To pick just one such list, the Irish gambling site Paddy Power ranked Atlanta No. 1, at 2-1 odds, followed by Philadelphia at 7-1 odds, Boston at 8-1 odds and Toronto at 9-1 odds, according to an Oct. 24 report by money.cnn.com. (The rankings have shifted since then, a clear indication that punters see a heated contest to win a company that would bring 50,000 well-paid jobs to a region.)

Here’s how the four cities stack up in the criteria that may be part of Amazon’s criteria in its site selection. From CBRE’s report:

Labor cost for a software engineer

In a take-out on the metro Atlanta market, CBRE selected three hot topics:

To be sure, CBRE didn’t conduct its study or release its report to observe on the Amazon site selection. Rather, the report is part of the real estate services and investment firm’s effort to inform on the status and trends in various markets.

This particular study focused on the relation between office rent pricing and the nature of the high tech sector in the top 30 tech centers located in the United States and Canada.

The trend affecting commercial landlords is that high tech companies are taking office space that historically has been taken by lawyers, financial services and other providers of professional services.

The report affirms the dominance of the Midtown submarket. 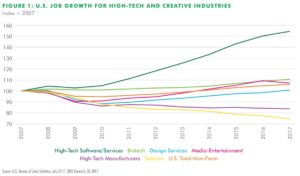 Job growth in the high tech sector has eclipsed fields across the board since 2007, according to a report by CBRE. Credit: CBRE