John Calvin “Jack” Portman III, an Atlanta architect who led Portman Architects’ entry into Asia in the 1980s, died of natural causes  on Aug. 28 at his home. 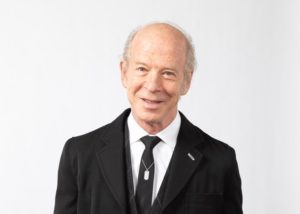 His death is less than three years since the death of his father – John C. Portman Jr., someone who transformed the Atlanta skyline with the development of Peachtree Center, Atlanta’s Hyatt Regency Hotel, the Westin Peachtree Plaza and more than a dozen blocks downtown.

Jack Portman was chairman and CEO of Portman Architects until his death.

“I’m devastated. Jack was like a brother to me,” said A.J. Robinson, president of Central Atlanta Progress who worked with the Portman organization beginning in 1981 as part of the architectural firm’s international expansion. “It was too soon.”

“Jack was a character. You couldn’t help but like him,” Robinson said. “He was a guy with an insatiable appetite for culture, travel and people. He couldn’t sit still. He really wanted to conquer the world.” 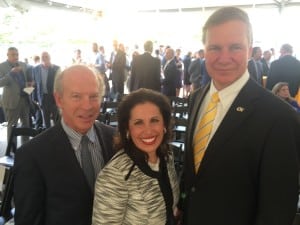 Jack Portman, Eloisa Klementich and Bud Peterson at the unveiling of the design for the Coda development in 2016 (Photo by Maria Saporta)

For most of his business career with Portman Architects (formerly John Portman & Associates), Jack Portman was in the shadow of his father – never getting the full recognition for his role in making the company international.

“The Portman organization is more known in China and India than it is in America, and that’s due to Jack,” Robinson said. Their favorite project was Shanghai Centre, which was “pioneering and imaginative” – by being one of the first Western developers to build a major project in China

John Portman IV, who specializes in finance and serves as president of Portman Holdings, said 30 banks lent money for Shanghai Centre to spread the risk of doing business in China during the 1980s.

John IV called his father a kind, charismatic and thoughtful man who was not afraid to take risks.

“He had the courage to move three kids under the age of four to Hong Kong in 1980 to open up a Portman office there,” John IV said. “He had the wanderlust.” 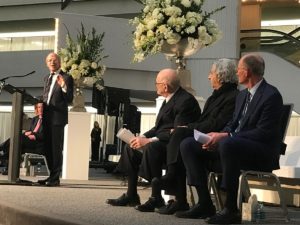 Jack Portman with Mickey Steinberg, Mohsen Mostavi and A.J.Robinson during the memorial service for his father on Jan. 6 2018 (Photo by Maria Saporta)

With his focus on international development, Jack Portman was able to grow beyond his father’s expansive orbit in the United States.

Jack Portman was able to figure out “how do I build on what my father’s done and put my own fingerprints on it,” John IV said.

Robinson spoke of Jack Portman’s warmth and sense of humor.

On a personal note: Jack Portman had become a dear friend over the years. He loved to tell people that my father had taught him architecture at Georgia Tech and my mother had taught him French at the Alliance Francaise d’Atlanta. My father also his father’s architecture professor at Georgia Tech – calling my father Ike “Why?” Saporta – for trying to get his students to think. Jack and I would compare notes of what it was like to be the children of great men and women

Here is the official family obituary with details of Jack Portman’s life:

Son of famed Atlanta architect John Calvin Portman Jr. and Jan Portman, Jack was born November 3, 1948 in Atlanta, Georgia. Jack graduated from The Lovett School in Atlanta, then earned a Bachelor of Architecture from the Georgia Institute of Technology and a Master of Architecture from Harvard University’s Graduate School of Design. He began practicing architecture in 1973 at John Portman & Associates, rising from an Apprentice Architect to become Chairman of the firm, now known as Portman Architects.

Jack took over leadership of Portman Architects following the death of his father, John C. Portman Jr., in 2017. While exceedingly successful as a real estate developer, Jack was passionate about being an architect, particularly the creation of meaningful architecture with a focus on culturally sensitive design. He once said, “The challenge of the architect is to do something that seems to belong where it is situated.”  Throughout his nearly 50-year career with the Portman Companies, Jack pioneered their international expansion, helping to transform the enterprises into the globe-spanning real estate design and development firms that they are today. Most notably, Jack was one of the first American businessmen to recognize the enormous potential of the Pacific Rim markets in the wake of the reestablishment of diplomatic relations between the U.S. and China. 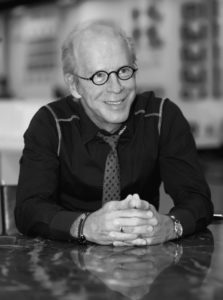 In January 1979, Jack traveled to Shanghai, Beijing, and Hangzhou to investigate possible business opportunities in China. Jack worked to get in front of the right people to open minds to new possibilities. His efforts led to the design and development of Shanghai Centre, the first project in China to be undertaken by a foreign architect and developer who was not ethnically Chinese in decades. His all-time favorite project, Shanghai Centre represented a triumph of perseverance and diplomacy, harmonized cultural references with a vision of the future, and served as a catalyst in the rapid evolution of the practice of architecture in modern-day China.

Over the course of his long career, Jack became something of an ambassador for American architects in China. He pioneered a successful approach to practicing internationally by immersing himself in the culture, learning Mandarin, and building relationships based on a spirit of cooperation and collaboration. In awarding Jack fellow status within the American Institute of Architects (AIA), the organization recognized him as the embodiment of the AIA’s desire to expand the institution’s reach globally, provide a voice for the profession, and serve as a resource to aid the advancement of other members. His visionary leadership in Asia significantly boosted Atlanta’s image as a savvy player in the global marketplace.

Success in China led to work in India and beyond, including additional projects across the United States, where Portman Architects continue to prove their progressive design talents. Despite his sudden departure, Jack leaves the firm on solid footing with thriving offices in Atlanta and Shanghai. Portman Architects is growing and active under the leadership of long-standing principals who benefitted from experience working with both John and Jack Portman. Jack was perhaps most excited about the firm’s talented young architects who he characterized as coming out of school well-equipped to contribute in a big way right from the start.

In recent years, Jack has been instrumental in the establishment of a distinguished visiting professorship in architecture at Harvard GSD in honor of his father. The John Portman Visiting Chair in Architecture creates a special opportunity for Harvard GSD to bring internationally recognized designers to campus in a sustained role, and to engage in the life of Harvard while supporting research assistance, exhibitions, and publications. Additionally, Jack served on the board of Harvard GSD Dean’s Leadership Council & Georgia Tech China Foundation and was a member of the University of North Carolina (UNC) Chapel Hill Chancellor’s Global Leadership Council.

Jack was well known amongst family and friends for his mischievous sense of humor, impeccably unique style, love of design, and his exceptional generosity. He loved nothing more than when all of his children and grandchildren, along with spouses and close friends, joined him in the backyard, chatting and laughing. Often a grandchild would interrupt the adult conversation, begging “Daddy Jack” to play with them, and he always did. “Daddy Jack” was the most fun. Each of his grandkids knew that he would be up for anything, especially a second (or third) dessert, an impromptu painting session, or some exciting excursion way past bedtime. A voracious reader and a passionate artist, Jack pursued a lifelong enthusiasm for learning, painting, and traveling the world—experiences he considered his most important education—and he always shared the fruits of these passions with the ever-growing number of people who were fortunate enough to be a part of his life

Jack was a proud father to Joannah Portman Daley, Alissa Portman Beard, John C. Portman IV, Easan Everly Portman, and Eres Ever Invicta Portman. In addition to his five children, Jack is survived by his mother, Joan “Jan” Portman; his siblings, Michael Portman, Jeff Portman, Jana Portman Simmons and Jarel Portman; five grandchildren, Emerson Daley, Holden and Amelia Beard, and John Calvin Portman V and Everett Portman; and countless more relatives and cherished friends. Jack was preceded in death by his younger brother Jae Portman and his father, John Calvin Portman Jr. The family is holding a small private memorial service and, in lieu of flowers, suggests that memorial contributions be made to Art Papers, the Andrew J. Young Foundation or another charity of your choice.