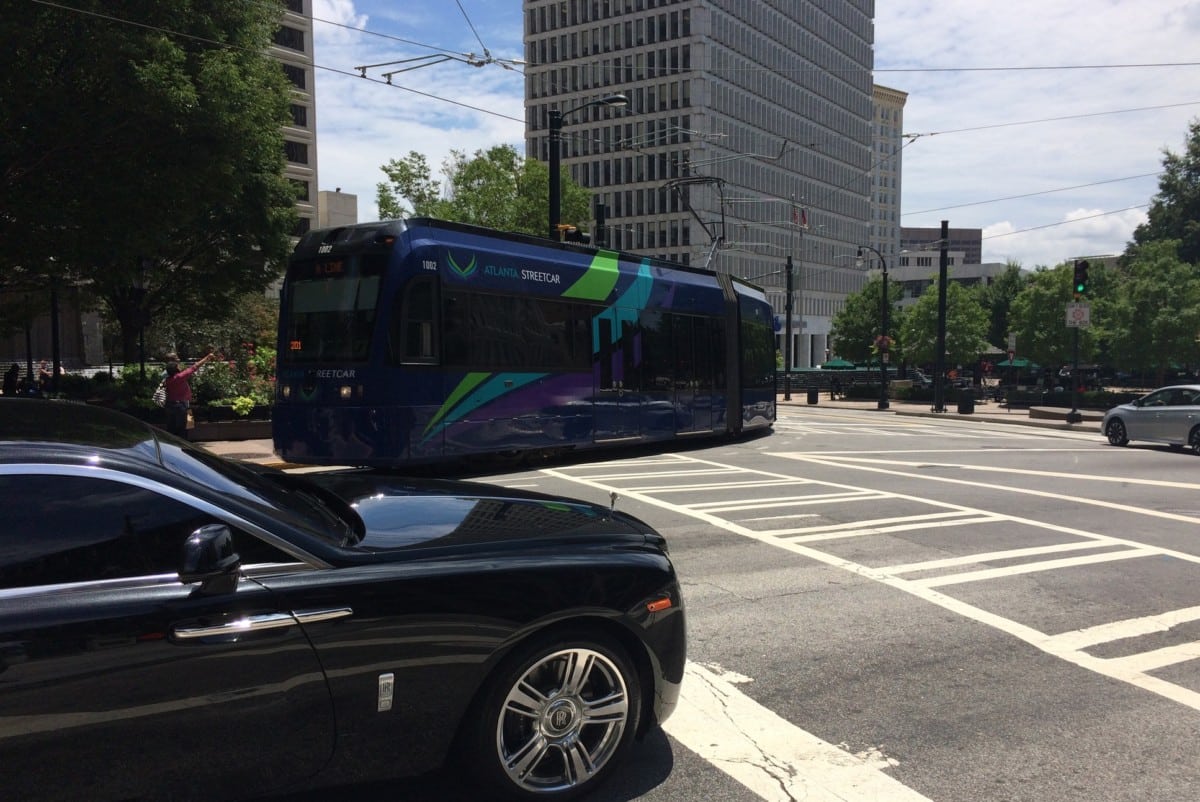 The Atlanta Streetcar has improved its safety and operations and is on track to sever its relation with MARTA and function solely as an entity of the city, even as passenger fares cover just 4.5 percent of expenses, according to Atlanta’s public works commissioner.

The Atlanta Streetcar program has resolved safety issues and is, ‘on the right path,’ according to Atlanta’s public works commissioner. File/Credit: David Pendered

All of the safety concerns raised in May 2016 by the Georgia Department of Transportation have been addressed, said Public Works Commissioner William Johnson. He made the remarks in a quarterly report presented Wednesday to the Atlanta City Council’s Transportation Committee.

The issues GDOT raised were so severe that GDOT said it would order the streetcar to cease operations in June 2016 unless the streetcar provided adequate plans to correct the situation.

“Less than a year later, we’re happy to report that all 66 corrective action plans have been accepted and an additional 20 were closed out, which basically means no further action is required now or in the future,” Johnson said.

Johnson said the streetcar has operated 90 consecutive days without an accident or injury.

Johnson said fares collected from riders cover about 4.5 percent of the cost of operations. He characterized that rate as, “not outside the norm,” for a start-up transit system.

Johnson observed that steps to raise the collection rate include having streetcar employees and Atlanta police officers ensure that riders have proof that they paid to be aboard a streetcar. Johnson did not cite the penalty for riders caught without proof of a purchased fare.

Another effort to raise revenue is to make it easier to buy fares via an app that enables riders to buy fares on their mobile devices. About 1,800 apps have been downloaded since it was introduced late last year, Johnson said. Some $2,300 has been generated through sales via the app, he said.

Johnson said the streetcar is in the process of gaining authorization from the Federal Transit Administration to operate the system without oversight from MARTA.

The FTA will be inspecting and assessing the streetcar over the next several months, Johnson said.

“We’re all optimistic that we will be successful in getting their approval to move forward with that,” Johnson said, referring to the three partners that operate the system – the Atlanta Streetcar, MARTA, and a wing of Central Atlanta Progress, the Atlanta Downtown Improvement District.

The streetcar now has its own executive director, Marwan Al-Mukhtar. He arrived in October and brings more than 20 years experience in managing streetcars in Pittsburgh, Tucson and, most recently, Seattle, Johnson said.

Another significant hire is Frank Chavez. Johnson said Chavez has more than 20 years of transit experience. Chavez serves as the streetcar’s compliance manager and came from MARTA, where he had administered contracts, according to his linkedin profile.

“We’re very pleased with the current state of operation,” Johnson said. “We feel that we have the right team to continue along this path.”

Johnson was spared some of the pointed questions the committee posed to Mendoza over the years. Such as who manages the streetcar. In one meeting, Mendoza was boxed into saying that he, as the commissioner of an entire department, oversaw the daily operations of the streetcar.

Then again, Johnson had some positive news to report, or – perhaps – news presented with a cheerful outlook. And, Johnson opened his presentation with a lighthearted comment.

“I promise to be brief, no matter how long it takes,” Johnson said.