A photo of stone structures at the former Atlanta Prison Farm site that may see reuse in the future public safety training center facility, as pictured in the new cultural resources report.

A new report on historic and cultural resources at the site of Atlanta’s public safety training center is important mostly for what’s between the lines. While finding little of significance, the report lays the groundwork for detail on the reuse of the debris of a historic library and two stone buildings that apparently will flank a future public entrance on Key Road.

The report’s publication was announced at the March 29 meeting of the training center’s Community Stakeholder Advisory Committee (CSAC). Other topics were the CSAC’s ongoing transparency and organizational issues, including an attempt to sort out the long-unresolved official status of some members. The CSAC got a tutorial on Georgia’s open meetings and open records laws, but did not discuss a previously announced policy attempting to ban members from talking to the media.

The training center is planned for a historic — but not officially protected — site along Key Road in DeKalb County that was formerly the Atlanta Prison Farm. The report by consulting firm Terracon looked at the 85-acre part of the site that will be used for the training center, and some soil-based examination in a larger area originally intended to be in the footprint but later removed. The report does not address some surviving prison structures, which are in an area presumed to become some kind of public park, though by what process is unclear. The forthcoming South River Forest green space planning process may address it.

Examining the site, as well as several private houses and other structures on its perimeter, the report found nothing of preservation significance. However, as briefly alluded to in the report, there are already plans to preserve some items. The Atlanta Police Foundation (APC), the private nonprofit leading the training center planning, has already been working with the Atlanta Preservation Center (APC), another nonprofit.

One project is finding a new use for demolished pieces of Atlanta’s old Carnegie Library, which was built in 1902 and demolished in 1977, with the debris unceremoniously dumped at the Prison Farm. Many of the pieces were removed and displayed during the 1996 Summer Olympics in Atlanta, according to the report, but some remain on the site.

Another is the reuse of two existing structures on the site, according to APC Executive Director David Yoakley Mitchell. That appears to be a reference to two stone buildings along Key Road that are described in the report as in “ruinous condition,” and which APF’s planning firm appears to be suggesting as the site of a public entrance into the future center.

“The Atlanta Preservation Center will be working with the Atlanta Police Foundation on the 85 acres, recognizing, documenting and starting to move forward with utilizing these remnants of the Carnegie Library into a more visual appreciation of these artifacts,” said Mitchell in an interview.

CSAC members are reviewing the report and are expected to submit any questions in writing by April 5 for forwarding to Terracon. Mitchell said the APC’s work will be done in “tandem with the development” as it moves along and in the meantime he is available to answer CSAC questions about the library artifact reuse.

APF got the CSAC’s approval to post the report on the training center’s website, but it was not available there as of March 31. To read the full report, click here. 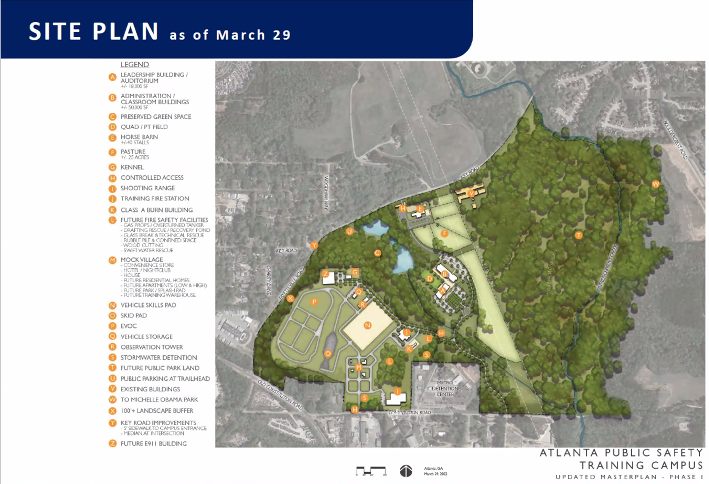 The latest site plan for the Atlanta public safety training center as shown at the March 29 CSAC meeting.

The use of existing buildings at the entrance was part of a review of tweaks to the site plan presented by HGOR, APF’s planning firm. That discussion focused on a more detailed plan for a police horse barn along Key Road and related public access through its paddock area. Part of the assumption was that the public would enjoy seeing horses.

Another tweak was a driveway off Constitution Road, on the southern side of the site, so that it crosses a stream once rather than twice to minimize environmental impacts.

CSAC member Anne Phillips asked about the future facility’s capacity to host large meetings, saying she had heard that such agencies as the Atlanta Citizen Review Board had proposed gathering there. Marshall Freeman, APF’s chief operating officer, said that such specific uses would be “news to me,” but that the plan indeed includes a “leadership building” with a “very large community space.” The idea is to open it to homeowners associations and other community groups, he said, indicating that capacity would not be a concern.

The review of open meetings and open records laws was conducted by Kristen Denius, the City’s chief transparency officer. There was no explanation for what prompted the CSAC to hold the presentation five months into its operations, and Denius praised the group for its transparency without mentioning any of its problems, including a debut meeting last year that likely violated the Georgia Open Meetings Act.

After reviewing state transparency laws, Denius said that “you guys are doing great. You’ve got stuff all over the web, people can Zoom in. Public access is not an issue for you guys, as far as I can tell.”

However, the training center website and its meeting materials have not been updated in months. The meeting in which Denius spoke was given public notice only in an obscure list on the website of the Atlanta Municipal Clerk’s office, which likely meets legal requirements, but left such observers as the Atlanta Community Press Collective scrambling on social media about how to access the meeting and whether it included a Zoom option. The next meeting is scheduled for April 26.

Not discussed at all was CSAC chair Alison Clark’s previous policy proposal about banning other members from talking to the media in the wake of an unflattering story. Clark previously said she consulted Denius about such a policy, which Denius denied. Some version of the policy may be included in the new bylaws that the CSAC adopted in the meeting. The bylaws were not discussed in detail and were not immediately available for review.

One bylaw item that did get discussion was an attempt to sort out confusion about the status of certain members that resulted from sloppy Atlanta City Council appointment legislation. The legislation did not include some people who turned up as members and incorrectly identified who some were intended to represent. As Clark noted, the legislation even misspelled her name.

A significant complication is that two neighborhoods now have two members representing them instead of the intended single member: Nicole Morado and Amy Taylor in Starlight Heights and Shaun Billingslea and Sharon Williams in Eastside Walk.

The bylaws attempted to resolve the situation by making Morado and Williams the official members and Taylor and Billingslea the “back-ups” who vote if the others are not available. Taylor was not happy with that arrangement, as she was intended to represent a DeKalb County Commission district instead. Clark said she will contact officials to try to sort out the situation further.