The revised site plan for the public safety training center as shown at an Oct. 26 meeting of the Community Stakeholder Advisory Committee.

A revised, denser site plan for Atlanta’s public safety training center was revealed on Oct. 26 to the project’s advisory committee. Some members weren’t satisfied, though, and pushed back, demanding a broader pollution study and more information in general.

In its second virtual meeting, the Community Stakeholder Advisory Committee showed some internal tensions over its mission and powers, with some focused on “advancing” the project and others wanting a veto-style vote at the end of the day. While affirming Boulder Walk resident Alison Clark as chair, the committee failed to elect other officers, splitting on “co-chair” nominees and tabling a decision on a secretary.

While transparency was better than at the Oct. 12 debut meeting which apparently violated the Georgia Open Meetings Act, the committee was still struggling to obtain information basic to its job. An environmental study fundamental to the plan still had not been distributed to members, and planners working for the Atlanta Police Foundation (APF), the private nonprofit leading the project, essentially told the committee to dig through City permits for details of an arborist’s report.

However, APF Chief Operating Officer Marshall Freeman promised improvements. He said training center documents will be on a website to be determined — either the APF’s or a dedicated site — and agreed to Clark’s request that committee members be provided with such documents ahead of the meetings so they can knowledgeably discuss them.

The City Council in September approved the police and firefighter training center for the former Atlanta Prison Farm, a City-owned property along Key Road within unincorporated DeKalb County already used as a shooting range and the former site of the police academy. The property was selected by APF and City officials behind closed doors and with most documentation still not publicly available. The site choice remains controversial and protests continue with the goal of getting the next mayor to trigger a contract clause allowing the City to back out of the lease. The advisory committee was created by the Council to provide public input in the remainder of the planning and construction phase.

The revised site plan essentially makes the training center portion of the site more densely concentrated on the eastern end of the property and opens up a bigger area for public greenspace. APF-hired planners said the changes were largely due to various studies of the land, trees, historic preservation possibilities and community input. The plan may change yet again. 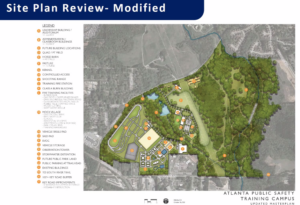 The revised site plan with its legend identifying the proposed locations.

One feature emphasized by Bob Hughes of planning firm HGOR is a 100-foot-wide buffer area around the training site’s perimeter, which is also intended as public-use green space. The buffer would be wooded — though invasive species would be removed and replaced with other trees — and might have an embankment that would help deflect noise, he said. A fence would line the interior property and details of noise mitigation will come in a future meeting. But, Hughes said, planners do not want to build a “giant wall that looks like heck.”

The revised version lacks several map points that were on the earlier version, most notably a “housing” component, as well as such features as an urban farm and a water tower. Those changes were not discussed, so it was not immediately clear if they still exist in the revised version. The revision also changes the term for a large police training facility from “mock city” to “mock village.”

APF spokesperson Kelsey Hull later said there is no material difference between the mock “city” and “village” and did not directly respond to whether the term was changed due to protesters referring to the training center as “Cop City.” She referred all other questions to a city official working with the committee, who in turn referred questions back to APF, noting the legislation that created the committee puts APF in charge of leading it.

The studies behind the revised site plan were not made available to the committee, creating a point of contention.

“We will be, again, coming up with a process for how documents are also shared,” said Freeman, the APF official, making the promise of online postings. Clark said she also wants committee members to “directly receive that information” ahead of meetings. “Yup, I believe that is possible,” Freeman replied.

Clark was named chair at the first meeting, but without explanation was re-nominated and voted in on Oct. 26, possibly due to the previous problem with the legal notice requirement. The split vote for the “co-chair” position, a role that was not defined, was between Sharon Williams of East Side Walk and Lily Ponitz. Ponitz was not on the original membership list and it was not immediately clear who she represents or how she joined. In September, Ponitz appeared in a YouTube video opposing the training center. Ponitz could not immediately be reached for comment and APF referred questions about the chair re-vote and Ponitz’s membership to the City official, who only provided the original list of members.

The training center’s previous site plan is shown at left, in comparison with the current revised version at right.

Ponitz played a key role in the committee pressing APF to conduct an environmental review of the entire site, not just its campus area, and in testing the limits of the body’s powers. She also pushed for the committee’s direct input into a cultural resources study underway, which refers to historical sites.

The training center would use 85 acres of a 380-acre site, with a big selling point — and answer to supporters of the alternative South River Forest vision — being the rest remaining as park space. The property is assumed to be significantly polluted from various sources, and APF is already conducting some early cleanup of such items as thousands of illegally dumped tires.

Identifying herself as an environmental engineer, Ponitz got planners to acknowledge that the initial environmental study focused on the 85-acre training center and does not address the remainder of the property, despite the future public use and APF already extending some of its study and cleanup into that area. She said the entire site should be studied, gaining the support of some other members who called for a staged approach prioritizing the 85 acres. Hughes repeatedly called that a “fair request” but indicated that might fall on the City rather than APF.

“I think that’s a request that should go out there but it’s — we figure out how that gets done,” said Hughes. “And I’m dancing around that because… I’m not sure that’s the Police Foundation’s job to look at the other 200-plus acres.”

Clark initially chided Ponitz for the pressure, saying that “we don’t want to disparage or in any way attack the individuals involved,” in response to Ponitz suggesting planners weren’t telling the truth at APF’s or the City’s behest. Clark said that the committee’s focus is “what we should do to advance this.” She later said she agrees with the concept of a broader review, but added, “I just think we have to remember the focus of this committee is on that 85 acres.”

The leverage of the committee remains an open question. “Are we going to have any kind of impact on how this site gets developed?” asked Amy Taylor, the representative for DeKalb County’s District 6. Ponitz pushed for an “accountability vote” at the end to make sure the final product matches committee wishes.

Hughes said the committee has and will have input by voicing its concerns and wishes. He said the planning will be an “iterative process” that he hopes to open up into more of a dialogue than just a presentation and a reaction. He suggested that the night’s meeting would give the committee an idea of how its input was working.

Regardless, Hughes is an outside consultant hired by APF and does not ultimately determine the process. No APF or City official commented on the issue.

Update: This story has been updated to clarify that some of Clark’s comments about Ponitz’s environmental were directed specifically at accusations of untruthfulness.