A Fulton court invalidated permits for these ads. The Supreme Court of Georgia didn't disagree. (Photo by Kelly Jordan.)

Next week, the first batch of Georgia absentee ballots for November’s elections will hit the mail.

But you have to request a ballot first, so if you need one, visit Georgia’s ballot application page.

Be prepared to wait for those November results though — widespread voting by mail is unfamiliar in most states and the ballots may take days to count. Plenty of pundits and hangers-on won’t wait for final data before they start naming winners and losers.

A pair of giant ads that have marked the gateway to Midtown on Interstate 85 for a generation have gotten a rebuff from the Supreme Court of Georgia. 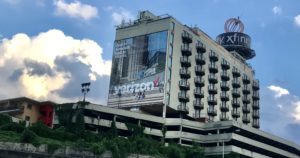 A Fulton court invalidated permits for these ads. The Supreme Court of Georgia didn’t disagree. (Photo by Kelly Jordan.)

Georgia’s highest court recently declined to review a lower court’s decision that invalidated city permits for the giant billboard on 1655 Peachtree and the round, peach-topped billboard atop it.

The case arose from neighboring property owners’ appeal of a new permit that would have allowed the billboards to be converted to TV-screen-like LED lighting.

According to the case brought by the neighbors, Hament Desai and the Hebrew Benevolent Congregation a.k.a. The Temple, the city made mistakes years ago by permitting billboards that are that big and that close to the interstate.

But the company that owns the billboards argues that the neighbors’ objections last year shouldn’t result in invalidating permits that date back to the 1990s.

Taz Anderson Realty Company is still looking at its legal options and plans to use all legal means at its disposal to defend its permits.

“While this may be an academic exercise in city planning to some, it is immensely personal and serious to us,” wrote Geoff Anderson, president of Taz Anderson Realty Company, via e-mail. “We have made countless financial decisions based on the validity of the city-issued permits. If we were to suddenly lose the permits which the city has stood behind for nearly 30 years, the effect would be financially devastating.”

The Midtown Alliance, the neighborhood’s business and community group, wasn’t a party to the case, but it was quick to applaud the word from the high court.

“These things have been up for 27 years, the sign owner has gotten good bit of revenue for illegal signs for 27 years, it’s time for them to go,” said Midtown Alliance President and CEO Kevin Green.

Georgia, the city of Atlanta can toast some common political ground

The vote came with no debate at all, as part of a package of non-controversial legislation approved as a block.

Such services used to be illegal under state law, but this year the Georgia Legislature voted to leave the question up to local governments. 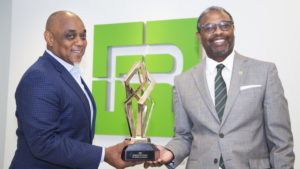 H.J. Russell & Company has won a statewide award for companies that consistently benefit both their communities and their own businesses via company culture, company resources and community empowerment.

The family-run Atlanta-based real estate builder and developer is the latest recipient of the goBeyondProfit Champion Award, which is awarded by a network of Georgia business leaders with the aim of spurring corporate giving and good acts.

“There has always had to be a bigger purpose in business than just to make money,” said Michael B. Russell, Sr., Russell CEO, in a statement announcing the award. “When our company was founded, the bedrock of it was to improve the community through our work. From the beginning, we’ve been beyond building structures, we’ve been about building communities where everyone has a place. Construction and development are in our bones but giving back to the community is in our heart.”