Though early voting is still available through Oct. 30.

On Election Day, Nov. 3, you must go to your assigned precinct to vote. Find that on your Georgia My Voter Page.

On to more Metro Atlanta happenings.

After months of abbreviated business due to COVID-19, Atlanta’s city court reopens for scheduled hearings Friday. And it’s not a moment too soon for Atlanans who want street racers off the streets.

Atlanta Municipal Court has been putting off scheduled hearings due to the pandemic, including hearings for people accused of charges related to street racing. The delay has been a great irritation to residents who say the plague of noise and dangerous driving won’t stop until folks face the deterrent of a court date. 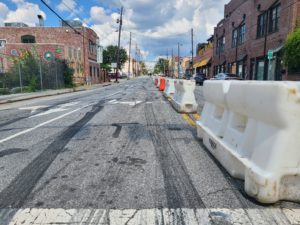 Earlier this month, the city court announced a speed bump in the form of an order from Chief Municipal Judge Christoper Portis. It states that people brought to city jail on street racing charges won’t qualify for bail automatically.  They have to sit in jail for up to 48 hours for a bail hearing before a judge.

Portis’ order expires in December, but Atlanta City Council is expected to consider legislation Monday to set up the same rule permanently.

Atlanta’s mayor and City Council have made some moves away from cash bail for some city offenses — on the grounds that locking people up before trial just because they can’t make bail contributes to unfair incarceration of poor folks versus rich folks.

But people are taking advantage of the lack of traffic since COVID-19 to race around, said Atlanta Mayor Keisha Lance Bottoms, in a press conference on public safety Wednesday. She said the administration, City Council and judges are working on making sure people are not automatically released from jail on racing offenses.

“When we eliminated cash bail bond, that was strictly related to our non-violent city offenses,” Bottoms said. “Obviously street racing was not something that was as prevalent at that time, so this has been an opportunity for us to assess or for the courts to assess this particular crime, this particular area of violation.”

The Atlanta Music Project, a nonprofit that provides intensive, free music education for Atlanta’s underserved youth, added three new members to its board.  Jennifer Dorian, founder and CEO of Full Hearted Brands joins the board as marketing chair. Donna Fuller, investor sales coordinator at Ameris Bank joins as a parent representative. Byron E. Gibbs, a senior manager at PricewaterhouseCoopers joins as treasurer. And the new board list is rounded out with Aaron Mitchell, director of talent acquisition for corporate functions at Netflix.