Anti-police-brutality Protestors and a Georgia State Patrol vehicle in the street Wednesday night, between a church and the state Capitol. (Credit: Sean Keenan)

People took to the streets of Atlanta Wednesday night again, driven by an announcement out of Louisville, Kentucky, that a grand jury didn’t indict any police officers there for their roles in fatally shooting Breonna Taylor, the emergency medical worker who was in her home when officers busted into the place on a no-knock warrant.

State campaign finance board trying to catch up with Atlanta mayor

The Georgia board that’s supposed to track and police politicians’ campaign spending wants to hear about Atlanta Mayor Keisha Lance Bottoms’ 2017 campaign. The Georgia Government Transparency & Campaign Finance Commission had scheduled a preliminary hearing for Thursday, at which point they tentatively rescheduled it for Dec. 10.

Last December, the agency informed Bottoms that her campaign was being accused of accepting almost $400,000 in donations from individuals who gave more than the law allows.

Ethics commission Executive Director David Emadi said that attorney Alvin Kendall, representing Bottoms’ campaign, had told the agency that he couldn’t make it Thursday, but that Kendall didn’t make the right kind of filing to ask for a delay. Emadi called Kendall’s absence a “stall tactic.”

But on the other hand, the delay triggered a long commission discussion about how no rules seem to govern how to request delays — that it just seems to be up to staff discretion.

Bottoms’ office didn’t immediately reply to a request for comment on Emadi’s accusations of foot-dragging, but in earlier comments on the matter, her office told the Atlanta Journal-Constitution that Emadi is being “blatantly untruthful.”

The CDC Foundation is creating a new executive team role and bringing on Dr. Lauren Smith as its first chief health equity and strategy officer. 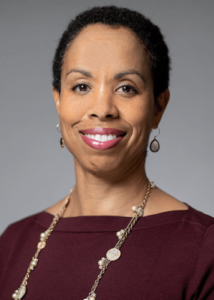 Smith comes to the foundation from FSG, where she was co-CEO of the multinational social impact consulting firm.

“The COVID-19 pandemic has in real time laid bare health inequities that have been with us across our history,” said Dr. Judy Monroe, president and CEO of the CDC Foundation, in a press release announcing Smith’s arrival. “While nearly all of Foundation’s public health programs have a health equity component, it is vital that we are purposeful and strategic in how we evaluate and address health equity across our organization.”

The Atlanta-based CDC Foundation is the nonprofit authorized by the U.S. Congress to mobilize private and philanthropic support for the work of the U.S. Centers for Disease Control and Prevention.

With the first phase of construction already finished, the Piedmont Healthcare Foundation has announced it’s met its $150 million fundraising goal for the whole Marcus Tower at Piedmont Atlanta Hospital.

Phase I opened on July 15; phase II is underway and should start opening in January, 2022.

Phase II will start with space for neurosciences services, and one patient floor will be completed per year until 2026 when the final two floors should be finished up.

Charlotte-based Truist Financial Corp honor three Southern leaders on Sept. 22 when the honorees were able to watch the Atlanta Braves from a private suite at the Omni Hotel at the Battery Atlanta (overlooking Truist Park).

“As part of our purpose to inspire and build better lives and communities, we wanted to create a special experience for those who have made meaningful contributions to the community, especially during these challenging times,” said Dontá Wilson, chief digital and client experience officer for Truist.

The three Community Champions who were honored included: 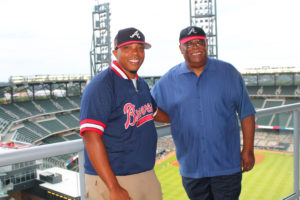 Honoree Reginald Hollins (l) and his dad on Tuesday night, during the VIP Experience at the Omni Hotel at the Battery Atlanta overlooking the Braves Game at Truist Park (Special: Truist Park)

For the first time in 31 years, people will be able to be “attend” the Council for Quality Growth’s Four Pillar event without having to buy a ticket.

On Thursday, Oct. 1, the Council will honor Doug Hertz, chairman and CEO of United Distributors at the 31st annual Four Pillar Tribute beginning with a reception at 6 p.m. and a one-hour program at 6:30 p.m. No registration or log-in is required to attend.

The event will be streamed at FourPillarTribute.com. If you want a sneak peak, click here for one-minute preview of the event. 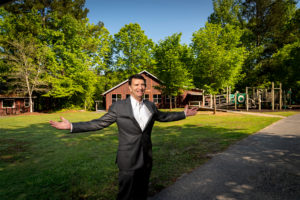 The master of ceremonies will be Comer Yates, executive director of Atlanta Speech School; and there will be special appearances from Gov. Brian Kemp, Atlanta Mayor Keisha Lance Bottoms as well as the honorary co-chairs: Arthur Blank and Bernie Marcus, co-founders of the Home Depot.

“The Four Pillar Tribute is a unique honor that celebrates the recipient’s philanthropy as well as their significant contributions to economic development and Atlanta’s quality of life,” said Michael Paris, president and CEO of the Council for Quality Growth. “This award is unparalleled in the Atlanta region and has come to be known as the highest honor bestowed for the honoree’s actions across what we consider the four pillars of leadership and success: quality, responsibility, vision, and integrity.”

For more than three decades, the Council has paid tribute annually to an outstanding individual in the metro Atlanta region who best exemplifies the Council’s mission of promoting balanced and responsible growth.

Hertz has chosen “Patience and Perseverance” as his theme for the Tribute, a nod to the life and business advice given to him by his father, and advice he uses in both his professional and philanthropic activities. Hertz runs United Distributors, a family-owned business that is now in its fourth generation.

On the civic side, Hertz was the founder of Camp Twin Lakes, and he continues to serve as its board chair. Hertz also has guided his alma mater, Tulane University, in consecutive years of board chairmanship; chaired the National Board of the Wine & Spirits Wholesalers of America organization; and co-chaired the Bid Committee to bring the 2019 Super Bowl to Mercedes Benz Stadium.

Other civic activities include leadership positions with the Woodruff Arts Center, the Georgia Research Alliance, the Georgia Ports Authority and Children’s Healthcare of Atlanta.

Atlanta dancers to Americans: Get your booty to the poll 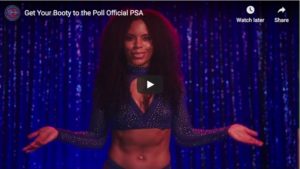 Get your bootie to the poll PSA. (Anyone can read the site, but on YouTube, the video is for people aged 18+.)

Some of Atlanta’s most popular, attention-getting women are calling on you to educate yourself on local candidates and get your booty to the poll.

“A district attorney decides who to prosecute … including whether or not to go after dirty cops. … Do you know who elects the DA? We do.” said Imani, Jenny and Coy, three exotic dancers from Atlanta clubs who star in a new PSA for the Get your Booty to the Poll voter education and turnout campaign.

They’ve got links to your local candidates, your voter registration guide —  and video — on the campaign website.

First Tee, an a youth organization that strives to teaches young people values like integrity, respect and perseverance through the game of golf, is expanding its offerings after a $9.5 million grant from PGA TOUR Superstore and The Arthur M. Blank Family Foundation.

One of the new offerings will be a leadership summit for 40 teens in 20201, hosted at West Creek Ranch in Montana, a retreat space owned by Arthur M. Blank (who also owns the PGA TOUR Superstore.)

“We are committed to being a positive influence in our communities and truly believe in the purposeful impact sports can have in developing and supporting youth,” Blank said in a foundation email announcing the grant.

The foundation has already worked with First Tee for more than a decade.

Melissa Burton, previously controller of 3Keys, has been named interim CEO of the nonprofit – following the departure of Darlene Schutz, who has served as the nonprofit’s president and CEO for the past 11 years. 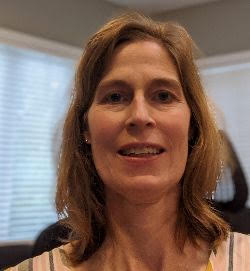 In her new role, Burton brings more than 25 years of experience in accounting and finance including 17 years in the non-profit sector. Prior to joining 3Keys in 2019, Burton worked at Rainbow Village as its controller, and she served as the CFO for Annandale Village for 12 years.

As previously reported, Schultz left 3Keys to become CEO of Georgia Works! Schultz, however, will continue to serve 3Keys as a board member.

In an email, 3Keys wrote:

“Melissa looks forward to continuing the mission of 3Keys and making housing a dream come true for more individuals as we expand our tenant base. We are excited that Melissa has agreed to serve in this capacity and provide the administrative guidance the agency needs during this time of transition. More than ever 3Keys is committed to building upon our recent successes and working to develop and manage affordable permanent housing for individuals with mental illness to enable them to live their lives with purpose and dignity.”

Christian City, a metro Atlanta nonprofit that offers housing, health care and crisis intervention headquartered at its 500-acre Union City community, has named Dan Cathy its individual Community Champion Award winner. Home Depot is the honoree for the corporate category. In the nonprofit category, 100 Black Men of Atlanta is the honoree.

The award recognizes demonstrated outstanding leadership and commitment toward the betterment of metro Atlanta.

An awards gala is scheduled, but not until April, 2021.