“Grady is full,” according to its CEO.

“For nearly two weeks, our daily count of COVID patients has exceeded our peak numbers from late last summer. If admissions continue to climb, I worry we will face what hospitals in other states grapple with – tough choices on providing care,” Grady Health System CEO John Haupert wrote Wednesday in a newsletter.

He encourages everyone to get a vaccine when they are eligible.

The state and its county health departments have struggled to organize vaccine distribution — phone numbers ring busy and the news has plenty of stories of appointment website crashes and glitches. A note on Fulton’s site indicates they’re fully booked this week.

Our best advice is to check the list of vaccine providers at the state Department of Public Health.

Economists are known for hedging their bets when gazing into their crystal balls.

But trying to forecast the economy in 2021 is particularly difficult, Atlanta Federal Reserve President Raphael Bostic said in a conversation hosted by the Rotary Club of Atlanta with Dennis Lockhart, who used to hold that position. 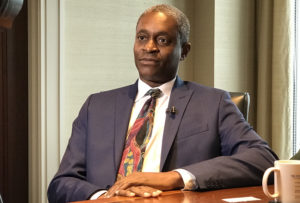 A year ago, both of them acknowledged they had no clue of the havoc the Coronavirus  pandemic would have on the nation’s economy and wellbeing.

Bostic described it as an “incredibly tumultuous” economy that is still in a recovery mode.

“We are at a crossroads,” Bostic said of the recovery. “From an unemployment perspective, we have got a pretty long ways to go… We are still about 10 million jobs short of where we were pre-pandemic.”

Bostic said he is focused on seeing how “Main Street” is doing versus “Wall Street.”

“At heart, this is a public health crisis first,” he said. “All the economic fallout has been a function of how we have responded to the public health crises. Making a forecast for this year is going to depend on the rollout of vaccines.”

Later he said he expects that by summer or early fall, society will have a level of penetration of the vaccine to permit “the economy to pick up.”

Bostic also said it’s likely that by March, the nation will know whether additional federal relief will be needed to support struggling businesses.

“Businesses are trying to figure out how to hang on,” he said. “It’s conditional on us to keep them around throughout the duration of this pandemic.”

That also will be a factor on whether the loss of 10 million jobs is permanent or temporary.

Bostic did speak highly of his former boss – Janet Yellen – who has been nominated by President-elect Joe Biden to become Treasury Secretary saying she’s “incredibly bright” with a great sense of humanity. Because she is a former chair of the Federal Reserve board, Bostic said she would have a “heightened sensitivity” to show her independence from the Fed.

Bottoms signed a document agreeing that her campaign improperly accepted almost $120,000 — but the vast majority of that would have been OK if the accounting had been done differently.

The 10 minutes or so that campaign attorney Carey Miller appeared before the state’s ethics commission this month were cordial, with all sides agreeing that mistakes were made in a process that is, indeed, complex.

A new bill in the Georgia Legislature would let school systems and cities go to court and complain when some other government grants a property tax break that undercuts said school or city.

That is the situation in Atlanta, where both the school system and the City Council have asked Fulton’s development authority to stop granting property tax breaks to developers building fancy buildings in hot neighborhoods.

The development authority says it’s spurring growth and has declined to stop. Atlanta and the schools say Fulton is incentivizing projects that are going to happen anyway.

House Bill 66 by state Rep. Mary Margaret Oliver, D-Decatur, would give schools and cities the legal standing to intervene in the court procedures where tax breaks are formally approved.

Regular residents can already intervene, and some do.

The Sundance Film Festival is going satellite this year — with film screenings across the country. Eleven films are coming to Atlanta from Jan. 28 to Feb. 3 — drive-in and indoors options both available for most, in partnership with The Atlanta Film Society and The Plaza Theatre.

The program starts Jan. 28 with CODA — about a Child of Deaf Adults who is torn between pursuing her love of music and her fear of abandoning her parents.