As the Omicron variant spreads and COVID-19 cases increase around the metro area, Atlanta Mayor Keisha Lance Bottoms has reinstated a city-wide mask mandate for indoor public spaces. The City of Atlanta is back to the yellow zone of its reopening plan, which calls for “limited industries [to] resume operations with severe restrictions.”

Mayor-elect Andre Dickens recently announced that he tested positive for COVID-19 and urged residents to get their vaccine and get tested regularly.

On to more local news from the week: 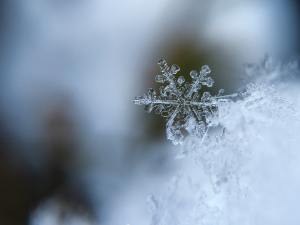 No snow this year, folks. Maybe in 2022? (Photo by Aaron Burden, Unsplash)

Hoping for snow this weekend? No dice.

Christmas is right around the corner, and it looks like Atlantans are in for another year of snow-less festivities. This weekend, the metro area will reach the mid-60’s — melting away any dreams of a White Christmas.

Snow flurries are far and few between in Georgia, but some hold out hope of waking up to your neighborhood blanketed in snow. The last time this happened was in 2010 when the metro area saw snow on Christmas for the first time since the 1880s.

But don’t despair; there are still ways to enjoy your own Winter Wonderland. Get in the wintery mindset by visiting Snow Island or Skate the Station.

A nonprofit dedicated to preserving Buford Highway’s famously multicultural community has quietly made a subtle name change that sheds what even its founder has acknowledged was a gentrification vibe.

The organization founded in 2015 as We Love BuHi is now We Love Buford Highway.

The name change was filed with the Georgia Secretary of State’s office in April and appears to have begun circulating in the nonprofit’s publicity materials around September.

“The Buford Highway community never used or identified with ‘We Love BuHi,’” said Lily Pabian, the nonprofit’s executive director, about the name change. “‘Buford Highway’ is how we’ve always known it!”

The “BuHi” term dates to the nonprofit’s casual, informal origin as an Instagram account of its founder, Marian Liou, a resident of the Brookhaven section of the Buford Highway corridor in the northeast metro area. Curious about urban planning inequities, gentrification pressures, and her own heritage as a second-generation Chinese American from California, Liou began visiting Buford Highway spots and documenting her experiences on the account, with the handle “welovebuhi.” As positive feedback came in, Liou formalized the effort, first into a for-profit social enterprise and then into today’s nonprofit.

The term “BuHi” originated with outsider fans of the area’s diverse restaurant scene and carried the air of similar abbreviations, like New York’s SoHo, typically created by real estate brokers and developers in gentrifying areas. In her first interview about the newborn organization back in 2015, Liou said she was “not a huge fan” of the name and said it was chosen partly ironically and partly for hashtag convenience.

“I’m grateful that they decided to make that name change,” said Liou, who is no longer directly affiliated with the nonprofit, this week. “Choosing the ‘welovebuhi’ handle was a spur-of-the-moment, tongue-in-cheek decision to poke fun at the nickname and also attempt to assert that Buford Highway’s stories and narratives should come from the community, not foodie influencers. I never thought the Instagram account or the idea behind ‘welovebuhi’ would take off, and as it did, the tension in the name was difficult to communicate clearly. So I’m glad and relieved that they are reclaiming the street and community’s full name.”

Today, We Love Buford Highway engages in a variety of cultural, artistic and historical programming. During the COVID-19 pandemic, it also has served as a social services agency providing food and arranging vaccinations. For more information, see its website — which for now still uses “BuHi” in its URL. 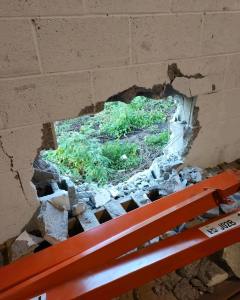 “Sadly, our warehouse was broken into last night in the most aggressive of ways. The loss of goods at this point of the season will be significant. The impact to the families yet to serve even more so. Our hearts are heavy,” the ESF team wrote online. (Photo from the Empty Stocking Fund’s Facebook page)

Just days before Christmas, someone broke into the Empty Stocking Fund’s warehouse and stole the collection of toys that were meant to go to local children.

Last week, SaportaReport covered the partnership between the Empty Stocking Fund and the YMCA of Metro Atlanta, whose goal is to distribute 30,000 holiday gifts to kids around the metro area. But, the recent break-in has thrown a wrench in the plans, and the nonprofit needs $25,000 to recoup the losses.

If you want to help spread holiday cheer, consider donating to help the Empty Stocking Fund team restock in time for Christmas.

NOAA predicts drought conditions could develop across much of the Peach State. (Image by NOAA via extension.uga.edu)

NOAA’s forecast of a dry winter in Georgia has prompted UGA’s agricultural climatologist to warn of possible drought conditions through March 2022.

“Not something to worry about at this point, but something to keep in mind,” Pam Knox wrote in the Dec. 16 edition of the University of Georgia’s “Climate and Agriculture in the Southeast” report. “Only time will tell how good this [NOAA] forecast is.”

The dry autumn has had its effect on the state. Almost 85 percent of Georgia is labeled as “abnormally dry,” up from 6 percent three months ago and 34 percent at the start of 2021, according to the Dec. 16 report by the U.S. Drought Monitor.

Metro Atlanta has been dry. Rainfall has been 3.54 inches below normal for the months of September through November, according to the Autumn 2021 Climate Summary by the National Weather Service. This makes autumn 2021 the 43rd driest since records were started in 1931, according to the report. 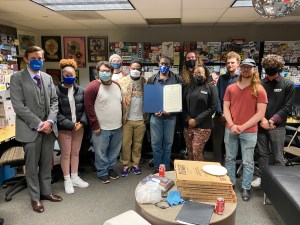 The 5th District congresswoman and Georgia Democratic Party chair has a WRAS alumnus on her staff — press secretary Ed Hula. He was among the staffers who presented the honorary proclamation for “50 years of broadcasting excellence” to DJs and managers at the station on Dec. 17.

“Throughout WRAS-Atlanta’s history, the station has become nationally known for its eclectic and cutting-edge music programming, being the station to debut new music from artists like The Who, Outkast, A Tribe Called Quest and the Replacements, to name a few,” reads part of the proclamation.

It also notes the status of WRAS, also known as Album 88, as the first 100,000-watt station to be student-run; the game show “Jeopardy!” including the station as an answer; the successful careers of many alumni; and the continued opportunities that the station provides to GSU students.

The actual 50th anniversary passed quietly in January with little attention, in part due to lingering resentment and tension over Georgia Public Broadcasting’s (GPB) surprise takeover of the station in 2014, and in part because of a lack of an official history. A GSU student’s recent master’s thesis about WRAS’s history is a step toward rectifying that.

The proclamation includes the historical detail that WRAS began broadcasting on Jan. 18, 1971, with an excerpt of poet Richard Strauss’s “Also Spoke Zarathustra” followed by George Harrison’s “My Sweet Lord.”

One thing conspicuously not mentioned in the proclamation: GPB. 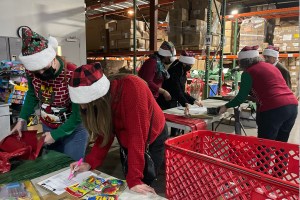 Atlanta’s Empty Stocking Fund has a newly renovated headquarters through the donations of time and materials by almost two dozen local businesses.

ESF Executive Director Manda Hunt said in a statement the renovations provide the organization with its first sense of home for the first time in its 94-year history.

Brasfield & Gorrie donated services as general contractor and Goode Van Slyke Architecture donated design services for a new office and other aspects of the project.

ESF fund allows parents who meet eligibility requirements to select toys for their children. New registrations have been suspended while existing requests are fulfilled, according to their website. 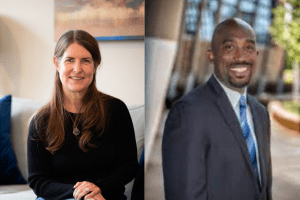 “Danny and Beth will both bring valuable seasoned leadership to our growing team. Their experience in philanthropy and pursuing visionary change will be critical as we build and execute strategies for these two new areas of giving,” said Fay Twersky, president of the Foundation, in a press release.

Shoy served on the Foundation’s team for nearly a decade before joining the East Lake Foundation, and now he is returning to continue his focus in youth development through art and education.

Before this new role, Brown spent nine years as president and CEO at the Community Foundation Sonoma County.