Sixty years ago this week, the University of Georgia first accepted Black students — under court order.

Hamilton Holmes and Charlayne Hunter had been applying to the Athens school since 1959, and kept being told the dorms were full. A federal judge ordered the school to let them in, and they registered on Jan. 9, 1961.

Holmes became a doctor and Hunter, a journalist.

On to Atlanta news this week.

Georgia Trend Magazine has just released its 2021 Most Influential Georgians, but for the first time ever, there will be no event to celebrate the honorees.

“Once we decided on our Georgians of the Year, it clarified our decision not to hold an event this month,” Georgia Trend Publisher Ben Young wrote in a text. “I hope our readers will look to these honorees and the great things they are doing for Georgia as a road map for the year ahead. Onward and upward in 2021!”

The 2021 Georgians of the Year (one of few times Georgia Trend has honored a group rather than an individual) were the “COVID” heroes” – the frontline workers fighting the pandemic and its effects.

The magazine highlighted several of those:

Carol Bowman, CEO of Learning in Color Corp. in Atlanta, and

Among the biggest annual honors go to the inductees to Georgia Trend’s Hall of Fame. The 2021 inductees are two prominent community leaders in metro Atlanta and beyond – Ann Cramer and James Cox Kennedy.

Cramer is described as “the Great Connector,” who has been a civic leader in metro Atlanta – first as an IBM executive (retiring in 2012) and then in her role with Coxe Curry & Associates.

Kennedy is described as “Moving the Needle,” as chair of Cox Enterprises and the James M. Cox Foundation.

Here is the full list of this year’s 100 Most Influential Georgians.

After spending more than two hours in a line to vote at my precinct at Park Tavern in June, I decided to take advantage of early voting at the State Farm Arena for the general election and Tuesday’s run-offs.

But the downside of not voting at my precinct on election day is missing the poll workers, dedicated people who have always provided a warm, personal welcome every time I’ve cast my ballot. 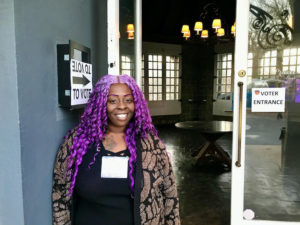 So, on Tuesday, I decided to go by the precinct to say hello, even though I had already voted.

Quay Edwards, the assistant poll manager, was as welcoming as ever – agreeing to answer a few questions about being a poll worker.

“I’ve been a poll worker for six years,” Edwards said. “I’m a people person. I love being around people. I love feeling like I’m helping by being of service to others.”

Edwards, who does hair and works as medical assistant when she’s not at the polls, said this past year has been particularly “challenging” and “hectic” because of the Coronavirus and all the elections.

Park Tavern made the national news in June because it housed five precincts, which led to especially long lines.

“There were too many precincts here in June,” Edwards said. “Things got very organized after June.”

On Tuesday, there were only a few people at the polls voting in the late afternoon. Edwards said about 320 people had voted in person.

“You never know you’re going to work with when during this type of work,” Edwards said. “I just love being in the midst of things.”

As we said good-bye, Edwards smiled and said: “Tell the kids I say hey.”

And that’s why I love to vote in person on election.

This past week, the chair of the Georgia Research Alliance – David Ratcliffe – was on the speaking circuit. On Monday, he was the keynote speaker at the Rotary Club of Atlanta. And on Thursday, he spoke to a large group of GRA eminent scholars in a video call. 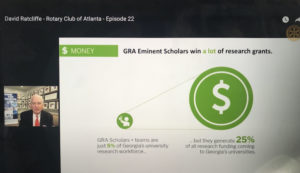 His message was the same. GRA is a good investment for the state of Georgia – generating about $10 for every $1 invested. The total return on investment so far is estimated to be $7 billion since its inception.

GRA, which turned 30 years old last year, is a public-private partnership that encourages eminent scholars to move their labs and research to Georgia. Research grants and funding soon follow the top researchers, making the state a more important technology hub.

GRA also provides venture funds for promising enterprises that often are seeded among the eminent scholars and their research.

More importantly, the research by GRA’s scholars is saving lives. At the Thursday zoom call, two of those scholars – Emory’s Rafi Ahmed and UGA’s Ted Ross – spoke of their work on vaccines and Coronavirus research.

“The key to our future will be sustaining contributions from the state,” Ratcliffe said, adding that at its peak, the state was granting GRA about $25 million a year.

Given a 10 to 1 return “should be sufficient to win the day,” Ratcliffe said. “You doggone got to be investing in this. It’s an economic benefit to the state.”

SOARR — or Save Our Atlanta Region’s Residents — came together in fall, as a response from metro Atlanta nonprofits and affordable housing advocates to the upcoming COVID-driven eviction crisis. The folks leading SOARR come from places like the Regional Commission on Homelessness, the Atlanta Regional Commission, the United Way of Greater Atlanta and the Metro Atlanta Chamber of Commerce.

Part of the work is set to include raising a fund for eviction prevention and rental assistance.

Phuong will serve as COO of SOARR during 2021.

“SOARR is excited to launch and collaborate with a variety of agencies in the coming months to
provide rental assistance and relief,” said Executive Director John Berry. 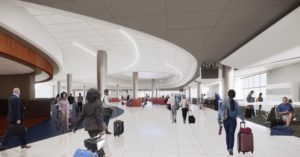 A sketch of the Terminal T extension. Credit: Special

A joint venture of Skanska, New South, FS 360 and Synergy will do the work, which also includes a rebuild of part of the North Terminal exit road and other facilities.

“The Concourse T-North Extension and renovation effort will enhance the level of customer service, while meeting passengers’ changing needs,” said Scott Cannon, executive vice president and general manager of Skanska’s building operations in Georgia and South Carolina, in a press release announcing the contract and sharing some sketches of the new space.

The $124.5 million work is part of a years-long list of projects that make up the airport’s 2030 master plan. (Another part of which was the new canopies over the car drop-off and pick-up lanes.)

Skanska and its partners expect terminal extension construction to begin this month and finish by December 2022.

The Georgia Forestry Foundation got an award from its national peers for excellence in partnering to educate the public about forests.

The nonprofit educational arm of the Georgia Forestry Association, an industry group, won the 2020 John Shannon Current Achievement Award from the National Association of State Foresters.

“We are proud to support leading conservation and environmental education nonprofits such as Georgia
Public Broadcasting, Chattahoochee Nature Center, Trees Atlanta and others to bring state-of-the-art
educational opportunities to our children,” shared Andres Villegas, president and CEO of GFF and of the state forestry association, in a press release announcing the award.

Monday, Jan. 18, 4 p.m. and 7 p.m.: Atlanta History Center’s virtual Martin Luther King Jr. Day celebration: The usual on-site programming is going online this year. Among the offerings is a talk featuring authors Stephen Kendrick and Paul Kendrick discussing their book Nine Days: The Race to Save Martin Luther King, Jr.’s Life and Win The 1960 Election in conversation with leaders of the Atlanta Student Movement, Charles Black and Reverend Dr. Otis Moss. This special event will occur live on January 18 via Zoom Webinar at 4 PM, with a rebroadcast over Atlanta History Center social media channels at 7 PM. Registration is free, but limited.