The skyline as seen from Piedmont Park serves as the backdrop for many weddings, birthday parties and fun times. (Credit: Hannah E. Jones)

Piedmont Park is ranked #16 on MSN’s list of America’s most beautiful city parks.

The park has served as a haven for apartment dwellers seeking fresh air during the pandemic, and this summer will be a place to meet up with friends, enjoy the festivals and soak up some sun.

On to other city news: 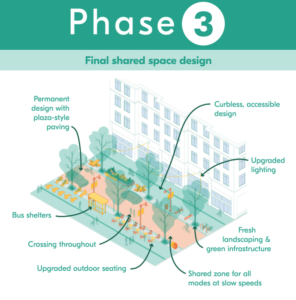 What if Atlanta wasn’t car-centric? Can Downtown’s streets be redesigned for people instead of cars?

These are the types of questions that led to Share Peachtree, a demonstration project from Atlanta’s Department of City Planning.

A demonstration project is a temporary way to test changes to roads and public spaces.

Starting June 21, three blocks between Baker Street and Ellis Street will be redesigned with one lane for each direction, leaving more space for pedestrians.

The area will be transformed into a “shared space,” which puts humans at the forefront of design, not cars when considering lighting, sidewalk width, curb height and other planning details.

To learn more about Share Peachtree, join the virtual community meeting on May 24. 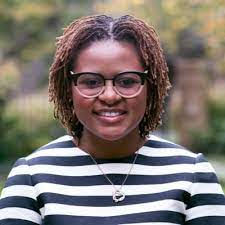 Cannon spoke on behalf of the San Francisco-based Tara Health Foundation, which filed a shareholder proposal urging Home Depot to publish an annual report on how its political contributions are aligned with the company’s priorities.

“Many companies called for a halt of their political contributions following Jan. 6 (attack on the U.S. Capitol), but Home Depot did not,” Cannon said, adding the Georgia Chamber of Commerce, Delta Air Lines and the Coca-Cola Co. had expressed regret for not speaking out more forcefully against voting bills in the last session of the Georgia General Assembly, but Home Depot had not.

The company urged shareholders to vote against the proposal, saying that it believed its current practices “provide transparency and accountability with respect to our political spending and the governance and oversight of that spending.”

“These patterns do not need to continue,” Cannon said. “Make the company a true champion of economic and environmental sustainability, or we’ll keep knocking at your door.”

Cannon gained national notoriety this past March when she was arrested at the Georgia State Capitol when she was knocking on the closed door of Gov. Brian Kemp’s ceremonial office while he was signing Senate Bill 202, which was viewed by some as voter suppression.

The proposal presented by Cannon received 38 percent of shareholder support, which means it did not pass.

Get lead out of the Westside

The Environmental Protection Agency is expanding its sampling for lead in Atlanta’s Westside.

The Westside Lead Investigation began in 2018 after an Emory University student’s research showed elevated lead levels in the soil.

This month, the EPA announced the expansion of the sample area, which now includes 2,097 properties.

Eligible residents can request a sampling of their land. If the soil exceeds safe levels, the EPA will replace the plot’s soil free of charge to the homeowner.

A child’s exposure to lead can have serious health implications, including slowed development and damage to the brain and nervous system, according to the CDC. 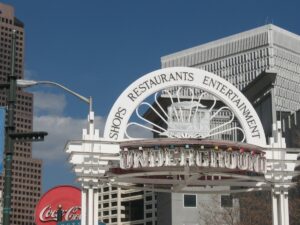 Summer of 2021 could mark the revival of Underground Atlanta that Atlantans have been waiting for. (File/Credit: Wikimedia.org)

A 21-stall food hall is set to open in this historic piece of Downtown.

The food hall and a showbar and restaurant called “Future” are the first tenants to sign Underground leases since its purchase late last year by a real estate company Billionaires Funding Group, led by metro Atlanta entrepreneur Shaneel Lalani.

The dining hall and Future will join the adjacent Masquerade in what Lalani’s company is working to build into a lively destination. Future is set to open June 4.

It’s far from the first time a developer has promised to bring life back to the oldest part of Downtown.  There’s no word yet on whether plans still include one of the things the last developer promised, a “YOTEL” tiny-room hotel that was to feature  “yobots” automated concierge services and delivery robots. 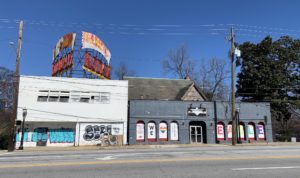 The Georgia Trust for Historic Preservation is accepting nominations for its 2022 “Places in Peril,” an annual list of the state’s 10 most endangered historic places.

The intent of the list is to raise awareness of endangered sites and boost preservation efforts. That includes not only buildings, but also districts, archaeological sites and “cultural landscapes.” The threat can be demolition as well as “neglect, lack of maintenance, inappropriate development or insensitive public policy,” says a Georgia Trust press release.

To be considered for the list, a site must: be eligible for listing on the National or Georgia Registers of Historic Places; facing a “serious threat to their existence or historical, architectural and/or archaeological integrity”; and have “a demonstrable level of community commitment and support for the preservation.”

The 2021 list included the Atlanta Eagle and Kodak buildings, which are in the midst of a redevelopment controversy and landmarking effort. Among the sites on the 2020 list was Fountain Hall at Morris Brown College, which since has seen major grants for stabilization and rehabilitation.

The submission deadline for the 2022 “Places in Peril” list is June 18. The list will be announced in November. For details, see georgiatrust.org.

Rockdale County will commission a transit master plan that will open the possibility of connecting to similar plans in neighboring counties.

Officials with the Atlanta-Region Transit Link Authority and the Atlanta Regional Commission said they are supporting the Rockdale plan, with bidding on a consultant contract expected by the end June. A county spokesperson and county Board of Commissioners Chairman Oz Nesbitt did not respond to comment requests.

Cain Williamson, the ATL’s chief planning officer, said at the authority’s May 6 board meeting that the plan will be similar to transit master planning processes underway in Forsyth and Henry counties, which are expected to be complete this summer and fall, respectively.

The ARC will provide matching funds, said planning agency spokesperson Paul Donsky. “We will also be reviewing the proposed scope to make sure it includes language that facilitates the ability to collaborate with Newton County’s recently started transit master plan (which ARC is sponsoring) as well as transit master plans already completed by Gwinnett and DeKalb,” Donsky said in an email. 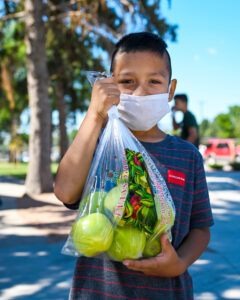 When COVID-19 struck, nonprofits went into overdrive to serve the growing number of folks who needed assistance.

The Atlanta Community Food Bank has stepped up its services in the past year to serve the one in seven Georgians who face food insecurity.

In the past year, the Food Bank’s daily food distribution increased by 66%, and the organization donated a staggering 113 million pounds of food, according to a newly released impact report.

The Food Bank has also launched a “Text for Help” initiative where anyone looking for a nearby food pantry can text “FINDFOOD” or “COMIDA” to 888-976-2232.

Click here for more information on the Atlanta Food Bank and the available resources.

The Coca-Cola Foundation has awarded a $2 million grant to the Atlanta BeltLine Partnership to support green infrastructure planned for Westside Park and Enota Park.

The grant was part of the $35 million in grants the Foundation made in celebration of its 135th anniversary on May 8 (of which $15 million were given to initiatives in metro Atlanta).

The Coca-Cola Foundation’s gift will help the future expansion of Westside Park, whose first 65-acre phase is scheduled to open this summer. The Westside Park will provide 30 to 90 days of emergency drinking water, invest significant resources in an underserved community, improve and preserve the natural environment, and spur incredible economic revitalization.

“The green infrastructure funded by this grant to the Beltline Partnership will provide much-needed green space to the community while addressing water issues impacting the westside of Atlanta,” said Bea Perez, chair of the Coca-Cola Foundation. “Water stewardship is imperative to the long-term success and health of our hometown.”

Funding will also support construction of an initial passive portion of Enota Park that will improve stormwater management and enhance public access to the Westside Trail. It is an essential first step toward realizing the full buildout of Enota Park as additional funding is secured.

The campaign will provide critical philanthropic investments alongside the recently approved Special Service District and other public funding to complete the full 22-mile BeltLine trail corridor, develop Westside Park and Enota Park, and help BeltLine residents remain in their homes through the Legacy Resident Retention Program. 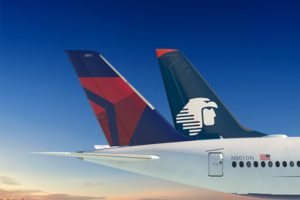 From America to Mexico

As the COVID-19 vaccine becomes increasingly available through the U.S., some are daydreaming of summer travels.

So Delta and Aeromexico have increased their flights after the major dip in travel during the height of the pandemic. The airlines have seen an 86% increase in flights compared to the same time in 2019, according to Nicolas Ferri, Aeromexico’s chief commercial officer.

The two airlines are celebrating four years of partnership. Since the launch of their transborder alliance, the airlines have flown over 22 million passengers.

The duo flies more customers per day from Mexico City to other destinations in Mexico than any other airline. 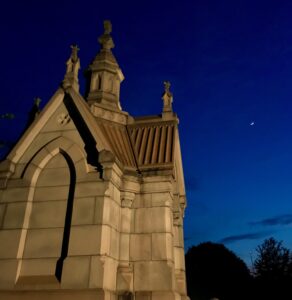 Oakland Cemetery is the resting place for some of Atlanta’s most influential residents. (Credit: Kelly Jordan)

City planners are plotting a program to highlight Atlanta’s cemeteries and encourage their preservation.

The “first-ever Atlanta cemetery network” was announced by Doug Young, who heads the historic preservation division of the Department of City Planning, at the May 18 Design Awards ceremony.

City Planning spokesperson Paul Owens later said that “the main goal for the formation is to revive interest in Atlanta cemeteries and preserve the historic ones.” That would include public engagement, such as tours and history walks.

The program is still about a month away from an official announcement and initial meeting, while planners gather contact information for cemeteries and “cemetery-interested groups,” said Owens. Meanwhile, Young said, anyone interested can get on an update list by emailing AtlantaCemeteryNetwork@atlantaga.gov. 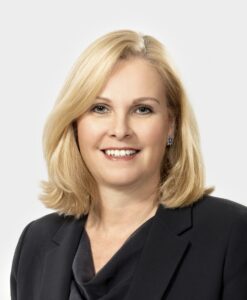 Crawford & Company names new Chair of Board of Directors

Boardmember Michelle Jarrard has also been named as the non-executive chair of the Board of Directors.

Jarrard is the first woman to chair Crawford’s board.

“I am honored to be elected Crawford’s Board chair and thank the entire Board for its vote of confidence,” Jarrard told SaportaReport. “This is an exciting time for Crawford as it celebrates its 80th anniversary and continues to successfully execute through the pandemic while retaining focus on its strategic pillars, financial performance, and people development.”