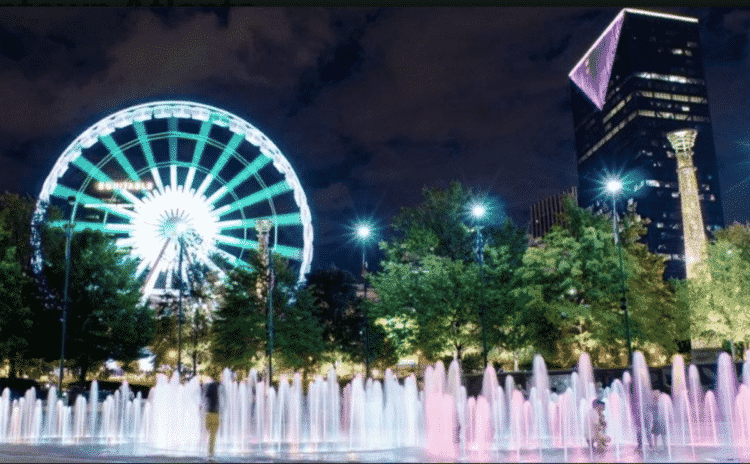 Rebranded as 101 Marietta, the office tower to the right of the Ferris wheel is to be renovated in order to provide the amenities that tenants want to offer their employees. Credit: Skyview Atlanta via news.wabe.org

As Downtown Atlanta continues its gradual expansion westward, beyond the new Falcons stadium, an iconic skyscraper near the CNN Center is being renamed and is to undergo its first renovation in 18 years. 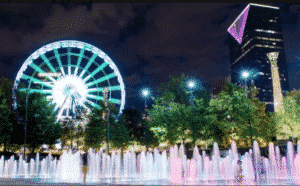 Rebranded as 101 Marietta, the office tower to the right of the Ferris wheel is to be renovated in order to provide the amenities that tenants want to offer their employees. Credit: Skyview Atlanta via news.wabe.org

Centennial Tower, as it has been known since 1998, is reverting to its former name and its address – 101 Marietta.

The building is notable for its signature top: A color-shifting chevron that helps the building serve as a landmark. The building is on an acre of land, located at the intersection of Marietta and Spring streets. It overlooks Centennial Olympic Park and the Skyview Ferris wheel.

“We are very excited to announce our renovation plans,” Anthony Dilweg, CEO of building owner Dilweg Companies, said in a statement.

“There has always been a landmark office building on this property since the early 1900s, and it has been known as 101 Marietta St. for most of its history,” Dilweg said. “Our repositioning efforts connect the historical roots of Downtown to the evolving workplace needs of today.”

Dilweg acquired the building in 2015 for $68.8 million, according to Fulton County tax records. The property was valued as high as $75 million, in 2005, records show.

Dilweg purchased the building through a limited liability corportation it formed almost two months before the transaction, according to records maintained by the Georgia Secretary of State.

Dilweg is based in Durham, N.C. The company was formed in 1999 and has acquired more than $978 million in assets and more than 9.3 million square feet of commercial properties. The company invests mainly in Atlanta, Charlotte, Durham, Nashville and Raleigh, according to a report on its website.

The lobby is being remodeled. New front and back lobbies are to be virtually connected through a video wall. Existing lobby space will be converted into collaborative workspaces. 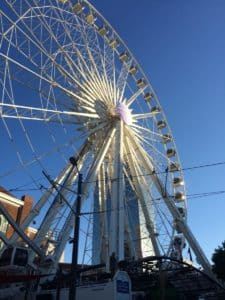 The 101 Marietta office tower overlooks SkyView Ferris wheel, which has proved to be such an attraction that the owner has signed a 20-year lease on the property adjacent to Centennial Olympic Park. Credit: David Pendered

New amenities in the building include a tenant lounge and gaming area, a state-of-the-art conference and training space, and a renovated fitness center, according to a statement.

“This is a prime example of redefining how we work, injecting creativity and imagination into the lobby of an iconic space,” said Katherine Lynch of the CBRE leasing division, which is handling the property.
“Dilweg’s renovations will resonate with current employers’ goals of offering a workspace that fosters innovation and provides an engaging experience,” Lynch said. “This building will be an epicenter of energy.”

The building was designed by a Houston-based architectural firm, Neuhaus & Taylor, which has since merged with another company, according to a report on emporis.com.

Its modern design relied on blue-colored glass to form the curtain-wall fascade.

Then known as 101 Marietta, or 101 Marietta Tower, the building was completed in 1975. It provided 36 floors and reached a height of 446 feet, according to a report on emporis.com. The building was renovated in 1998, with Atlanta-based Cooper Carry, Inc. serving as the architect. This renovation added the distinct chevron and raised the building’s height to 459 feet, according to emporis.com.

101 Marietta replaced another office building that was built in 1923 and demolished in 1973. The building had 12 floors, reached a height of 154 feet, and served as the headquarters for an architectural firm, Burge and Stevens, which served as the building’s architect. Burges and Stevens became Stevens and Wilkinson in 1947, a firm involved in many Atlanta icons the Atlanta Memorial Arts Center, now known as the Woodruff Arts Center, and Lenox Towers. In 2014, the firm combined with Atlanta-based Richard Wittschiebe Hand, according to a report on the company’s website.