A Rhode Island senator is back in Georgia today to share one message with Georgia voters. “Think about the coast as you cast your vote,” said Sen. Sheldon Whitehouse, a Democrat. 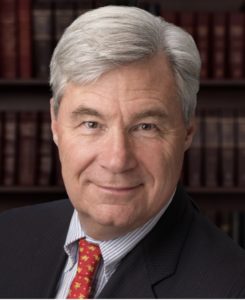 In a Monday morning conversation with SaportaReport, Whitehouse emphasized points for which he’s become well known: The climate is changing; sea level is rising and forecasts show it will continue to rise; and the financial impacts of flooding of coastal lands will cross party lines and harm entire communities.

That last point is a big one, he said.

“This isn’t just environmental,” Whitehouse said. “This is economic. Financial. There are real warnings of risk … not just for immediate property owners, but the whole economy.”

“I’ve got a state to defend and I need Georgia to help me defend it,” Whitehouse said. “I can’t defend my state if you can’t defend yours, at least not in Congress.”

The barrier islands off Savannah’s coast would be inundated by a 4-foot tidal inundation that is all but guaranteed in coming years, as portrayed in the lower image. The forecast and images were released by climatescience.org. Credit: Climate Science via Sen. Sheldon Whitehouse

For most of the conversation, Whitehouse focused on the potential consequences of climate change and the need to address it. He frequently returned to the financial implications of the inundations of houses and commercial properties – and the taxes they provide local governments to provide local services.

“Think about sea level change not as an environmental issue, but as a property issue,” Whitehouse said. “An awful lot of property is going to be lost and more is to have its values crushed.”

Whitehouse noted that property tax collections could drop significantly in local communities that are affected by rising sea levels. Values of residences and commercial properties will drop as the sea encroaches. Lenders will balk at requests to finance structures that may be under water before the loan is paid off, he said. These points have been raised for years in reports including: 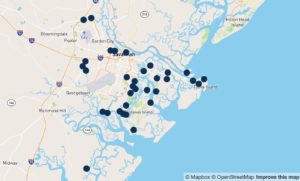 Whitehouse cited potential initiatives to reduce emissions from fossil fuels. He said he prefers a fee approach, in which fees would be collected on fossil fuels at the point of extraction or at the point of entering the country. President-elect Joe Biden has said climate change issues will be a focus of his administration.

In addition to the macro issue of reducing fossil fuel emissions, Whitehouse said initiatives of a smaller scale are important for local communities. Examples include federal funding for local governments to pay for threat analyses and potential responses to rising sea level, he said.

This type of analysis is at the heart of a project conducted this summer by Georgia Tech scientists and engineers. They started work on the Smart Sea Level Sensors Project, which is to help manage risk from sea level rise in Chatham County that could inundate an historic Black neighborhood, among others.

Whitehouse’s current trip and message are part of his personal quest for the U.S. to address climate change. He’s delivered 278 of his Time to Wake Up reports on climate change on the floor of the Senate, focusing on topics related to global warming that include fatal wildfires in the West and sea level rise in the East.