Scene from "Riders of Justice" movie

There are those of us who would follow Mads Mikkelsen anywhere.

You know Mikkelsen, even if you don’t. He of the bleeding eyes in the Daniel Craig “Casino Royale.” The dancing drunk in last year’s Best Foreign-Language Oscar winner, “Another Round.” The title character in the TV series, “Hannibal.” 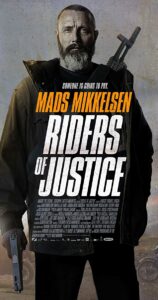 Mikkelsen is a Danish actor of breathtaking range and charisma, but even his most die-hard fans will be, well, challenged by his new film, “Riders of Justice.” Part Liam Neeson revenge film, part Three Stooges farce, the movie casts the Danish star as Markus, a military hard ass who must return to Denmark from his desert deployment when his wife Emma is killed in a freak train accident.

That she was even there is a bit freakish. She and their teenaged daughter had no intention of taking the train, but the girl’s bike has been stolen. And the girl’s bike was stolen because, in the opening scene, a man wants to buy a Christmas present for his granddaughter. Only, she wants a blue bike, not the red one in stock.

No problem says the bike shop owner who dispenses a minion to steal a blue bike. The daughter’s bike, as it turns out. Even so, things wouldn’t have spiraled into the absurd if a well-meaning passenger, Otto (Nikolaj Lie Kaas), hadn’t offered Emma his seat on the train. There is a collision, orchestrated by domestic terrorists (it is indicated), and Emma dies.

This is all in the first 10 or so minutes. The guilt-ridden Otto hooks Markus up with his goofball pals (Lars Brygmann and Nicolas Bro). Obsessed with all things Internet, this trio becomes convinced that the villains behind Emma’s death are the so-called “Riders of Justice,” an amorphous criminal gang.  Groucho, Chico and Harpo meet Qanon? 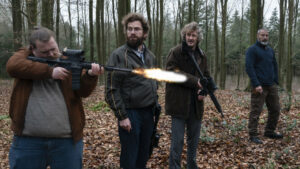 Scene from “Riders of Justice” movie

Well, not quite. Still, at times the Danish sense of the absurd doesn’t translate as well as it might. The movie stays merrily bonkers – blithely unconcerned as to whether its audience is with it or not.

It’s to the credit of the cast and director Anders Thomas Jensen that the picture manages to be as intriguing as it is irritating. The actors are all on the same wavelength, which, given the movie’s wavering tone, is quite a compliment.

The audience, I’m afraid, is not always so lucky. Still, when Jensen wraps it all up with double gift of Christmas bicycles, one red and one blue, something in you stirs. You may not have been entertained, but you haven’t been had, either.

“Riders of Justice” is available on video on demand.