The number of North Atlantic right whales has dropped to a 20-year low, and the calving grounds off the coasts of Georgia and two adjoining states aren’t hosting enough births to outpace deaths, new reports confirm. 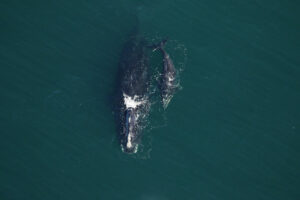 The latest report states only 336 right whales are currently alive. The report was issued Monday by Oceana, an ocean conservation organization, on behalf of the North Atlantic Right Whale Consortium. The consortium’s annual meeting concludes Wednesday.

This population report is lower than the 368 right whales cited in the latest report from NOAA Fisheries, which goes through the birthing season that ended in early 2021.

Aside from the actual population, whale advocates concur the number has declined significantly over the past decade. Birth rates are not keeping pace with death rates.

The declining birth rates reflect the death of potential mothers who are hit by vessels, tangled in fishing lines or perish of other causes due to humans, according to the consortium. The population of right whales would have been close to 600 if one of these causes were eliminated, according to an account of an analysis in the consortium’s technical report: 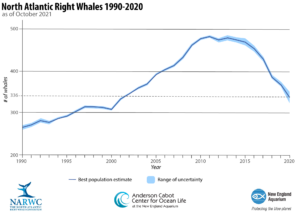 The number of North Atlantic right whales has declined for about five years after increasing for about 15 years. (Image courtesy of New England Aquarium)

The federal government sought to protect the right whales’ birthing grounds by changing the schedule for harbor dredging. The goal was to move the maintenance dredging from winter to summer months. Right whales would have left for New England by the Spring.

However, the summer schedule endangered sea turtles that nest on Georgia’s barrier islands. The coastal environment group One Hundred Miles filed a lawsuit in federal court in Savannah to halt dredging at Brunswick that was to have started in May, the start of sea turtle nesting season.

OHM prevailed and the case was dismissed Sept. 17. U.S. District Judge Stan Baker had issued an order on May 20 to halt the summer dredging schedule of the U. S. Army Corps of Engineers. The corps followed up with a July 13 ruling that dredging would occur only between Dec. 15 and March 31 of any year, while a full environmental study is completed. The corps was ordered to pay $31,874.60 for costs and attorneys fees.

NOAA’s report makes the linkage between rates of birth and death:

The consortium contends the population can afford to lose no more than 0.7 right whales a year. The estimated mortality rate has reached 27.4 whales, in the period from 2014 through 2018. The figure is significantly higher than the mortality rate of 18.6 percent in a previous assessment.

The consortium’s technical paper acknowledges the shortage of data and observes: