A mixed-use project of the type that abounded in metro Atlanta until the recent recession is shaping up on Roswell Road, right on the border of Atlanta and Sandy Springs. 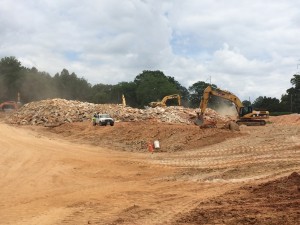 Earthmovers are raising the site of the Chastain mixed use project, which will serve as a landmark entrance to Sandy Springs on Roswell Road. Credit: David Pendered

JBL Builders has scraped two apartment complexes off the site and earthmovers on Tuesday were preparing the site for new apartments, retail and office space. Gov. Nathan Deal announced last week the state would provide Sandy Springs with a grant of $750,000 to help pay for the $3 million-plus realignment of Windsor Parkway at its intersection with Roswell Road.

The Chastain project spans about 22 acres and is located about 2 miles south of the storied Prado shopping center, which was redeveloped in 2008. The community has responded to both the projects in much the same way – generally glad to see the old buildings removed, and apprehensive about future traffic.

The two apartment complexes that were removed had been criminal hot spots for years. Local authorities flipped the script before the Chastain and Versailles apartments were demolished, using the vacant structures as training facilities to practice hostage recoveries and rescues from buildings filled with smoke.

The property originally rolled downhill, and out of sight, from Roswell Road and the ridgeline on which it was built. The new development will be closer to street level once the site work is complete.

MARTA reported that its bus service along Roswell Road has the capacity to meet future demands of the new project. MARTA’s main concern was that but stops be relocated to provide safe havens for awaiting passengers, according to its statement that is part of the development of regional impact review conducted by the Atlanta Regional Commission. 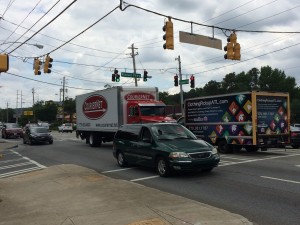 This intersection, of Roswell Road and Windsor Parkway, is to be reconfigured while construction continues on the Chastain mixed use project, due for completion in two phases in 2015 and 2017. Credit: David Pendered

Deal announced the state funding for the Windsor Parkway project on May 28. It is part of a package of $33 million in grants for 20 projects funded through the Georgia Transportation Infrastructure Bank. According to the section on Windsor Parkway:

Atlanta’s planning department also reviewed and commented on the project, even though it is outside Atlanta’s corporate limits. The development actually is in an area that Atlanta once sought to annex, prompting a cityhood effort that resulted in the creation of the City of Sandy Springs. 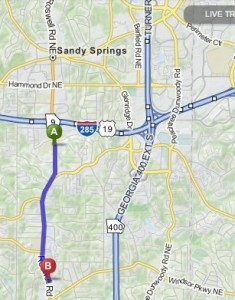 The Chastain mixed used project (B on the map) continues the redevelopment of Roswell Road that began in 2008 with the renewal of the Prado shopping center (A on the map), located near the corner of Roswell Road and I-285. Credit: mapquest.com, David Pendered

Mello urged for the project to provide ample amenities for bicycle riders and pedestrians, and for well-designed access to West Wieuca Road, which forms the southern border of the property.

The new development is slated to open in two phases, in 2015 and 2017, according to the development of regional impact review completed by the Atlanta Regional Commission.

The residential component of the project has been scaled back since the DRI was approved, in September 2012. The number of apartments has been scaled back, from 700 to 630. The units still are to be built to a condo quality. Prices are slated to begin above $1,500 a month.

In its review of the project as a development of regional impact, the Atlanta Regional Commission observed that the Chastain mixed-use project generally supports the redevelopment plan of the Roswell Road corridor south of I-285: