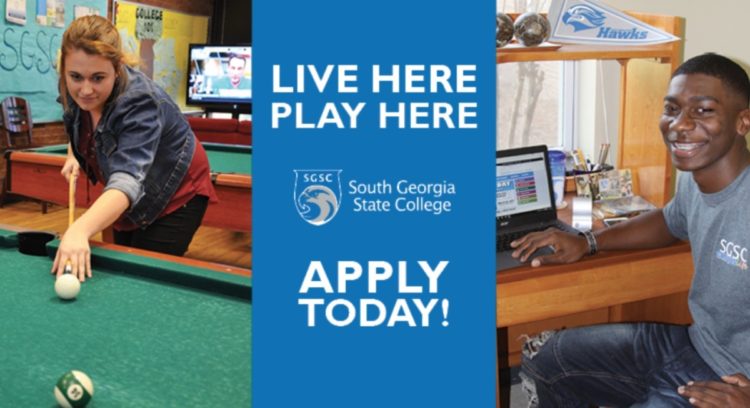 Civic leaders in Coffee County had a dream of their local college becoming a catalyst to move their community into the 21st century. Dorms and other facilities were built, but enrollment challenges have resulted in a credit downgrade on bonds that paid for the new facilities. Credit: sgsc.edu

Another slice has occurred in the “death by a thousand cuts” that threatens rural Georgia. This one involves the downgrading of bonds issued for a college that was to lead a swath of southeast Georgia into a brighter future. 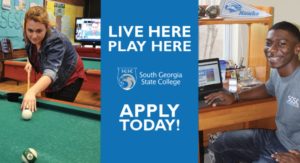 Civic leaders in Coffee County had a dream of their local college becoming a catalyst to move their community into the 21st century. Dorms and other facilities were built to attract students, but enrollment challenges have resulted in a credit downgrade on bonds that paid for the new facilities. Credit: sgsc.edu

The credit downgrade at South Georgia State College is the latest indicator of the difficulties of maintaining communities in parts of the state that today’s economy is leaving behind. The school is located in the Coffee County city of Douglas.

Similar financial challenges have resulted in the closure of six hospitals in rural Georgia since 2012, according to records maintained by the Sheps Center for Health Services Research, at the University of North Carolina. Nationwide, 79 rural hospitals have been shuttered since 2000.

The credit downgrade is not expected to trigger any devastating impacts. At least, not as long as the University System of Georgia – with its rock-solid credit rating – remains committed to its lease pledge with South Georgia State College. That’s according to a May 31 rating action by Moody’s Investors Service that took the rating from A1, with a negative outlook, to A2, with a stable outlook.

Analysts with Moody’s simply determined that the financial trajectory of South Georgia State College is not healthy. Here what the analysts reported: 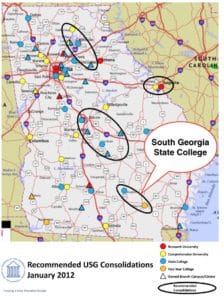 This situation is a far cry from the one civic leaders in Coffee County envisioned a decade ago.

They had high hopes the college could be both an incentive to keep local teenagers close to home, rather than leaving to attend college elsewhere, and as a catalyst to provide skills for the jobs of the future.

These goals arise repeatedly in Coffee County’s 2007-2027 Comprehensive Plan Update, Community Agenda for Coffee County. All Georgia counties are mandated to submit such planning documents to the Georgia Department of Community Affairs.

Civic leaders could read the writing on the wall. Coffee County’s economy has shifted rapidly from manufacturing and agriculture to services. The service sector provides 5,753 jobs and the manufacturing/ag/construction sectors provide 4,751 jobs, according to 2015 estimates by the Census. 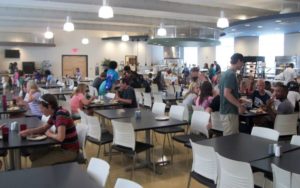 A dining hall was opened in a new building that was intended to attract students to South Georgia State College. Credit: sgsc.edu

The dream of strengthening the school looked even more attainable in 2012. That’s when the University System of Georgia created the college by consolidating two schools. The alternative would have been the closure of one or both schools.

The Board of Regents created South Georgia State College through the consolidation of Waycross College and South Georgia College, in Douglas. The multi-campus college that opened under its new banner in 2013 serves about 2,650 students from 111 Georgia counties, 22 states and 13 countries, according to an overview on the school’s website.

The momentum appeared to validate a previous decision to make the Douglas campus more inviting to potential students. The decision was in line with the county’s long-range comprehensive plan.

Local leaders had devised plans to develop and equip two dormitories, renovate a student center, and build a 15,773-square-foot facility to serve as a dining hall, convenience store, bookstore, café and related amenities, according to bond documents. 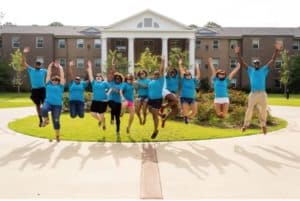 South Georgia State College staffers pose in front of one of the school’s dormitories, which were built in an effort to establish an on-campus student experience. Credit: sgc.edu

The Atkinson County-Coffee County Joint Development Authority issued the bonds. The authority loaned the proceeds to the SGC Real Estate Foundation, LLC. Three generations of the foundation were incorporated to handle the three bond sales. The sole member of the foundation is the non-profit South Georgia College Foundation, Inc., according to bond documents.

Now, two of those bonds have been downgraded by Moody’s – the issuances for the new dormitories and renovated student center.

The rating for the bonds issued to build the dining hall is not affected by the downgrade Moody’s issued May 31.