Ryan Gravel’s Moment wasn’t conceiving the BeltLine, it was when others embraced it 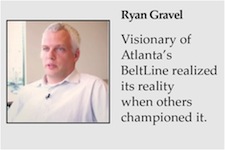 Though written 70 years apart, two books that will have the greatest impact on Atlanta’s history both sat on shelves gathering dust until friends of the authors dared them to submit the manuscripts to someone who could take them to the next level.

Margaret Mitchell at first denied having written a novel when MacMillan editor Harold Latham asked to see the rumored manuscript. When a friend chided her as not being serious enough to have written a novel, she collected a portion of the book she had finished nearly five years earlier and agreed to meet Latham at the Georgian Terrace Hotel lobby. After reading part of the book on the train to New Orleans, the editor shipped it back to his New York office, which offered Margaret a $500 advance and 10 percent of royalties three months later.

In December 1999, Ryan Gravel submitted his architectural master’s thesis conceiving the 22-mile BeltLine to his Georgia Tech advisory board. In the summer of 2001, two of Ryan’s associates urged him to take the bound volume that had been sitting on his bookshelf and ship it to Atlanta city government officials. City Councilwoman (later president) Cathy Woolard took up its cause, gathering the support of Mayor Shirley Franklin, who helped set up a tax-allocation district to fund the BeltLine’s development.

Seeing the map of the BeltLine today, wrapping around 45 under-developed Atlanta neighborhoods, I thought Ryan would say his Moment was when he looked at a map of the city, saw the 1860s-era railroad tracks outlined and had an “ah-ha” moment. He says he’s often asked if the idea came to him all at once, but it actually marinated slowly, sparked during his senior year in college when he rode trains all over Paris and later when he returned to the traffic-clogged streets of metro Atlanta.

“My moment was in 2003, when I realized we might actually build the BeltLine,” he said. “I was at a meeting of the Atlanta Regional Commission where I overheard these two women talking about the project and how it would connect the city and what it would mean for the city … They had taken ownership of it. It wasn’t my project … it was their project. What was amazing about it was that I could start to imagine that – to see that we would actually build this. When the public owns a vision and wants it to happen, they can make it happen.”

I remember the moment I first read about the BeltLine in a December 2004 AJC article. Despite having gazed curiously since childhood at those same mysterious, abandoned railroad tracks each time I drove over them, I never had seen what Ryan saw, over time. “This is a stroke of genius,” I thought when I read the article. That word is often overused, but I believe it applies in this case. George Bernard Shaw said geniuses don’t see more than other people do, “the man of genius understands the importance of the few things he sees.”

When I met Ryan a few years later at a breakfast networking meeting, he had just started working for Perkins+Will, which was once the largest client of my PR firm. “I’m an Atlanta native,” I told him. “I think the BeltLine is the best idea I’ve heard for Atlanta in my lifetime.” He reacted with the same humility he exhibits today, even though he travels extensively to cities such as Pittsburgh, Detroit, Rotterdam and Johannesburg that seek his inspiration to re-connect the dots of existing infrastructure in their urban centers.

Much as Paris was redesigned – at the time critics called it the “destruction” of the old city by Georges-Eugene Haussmann in the 1860s, creating the wider boulevards that are so much a part of its charm today – it will take a lot of investment and patience on our parts as Atlanta builds out the BeltLine over the next few decades.

Ryan volunteered and later worked for the city’s Bureau of Planning – which partnered with Atlanta BeltLine Inc., a governmental entity managing the now $2.8 billion BeltLine – but now his creative range is much better deployed at an international design firm such as Perkins+Will, which was chosen in 2010 to oversee the BeltLine’s design.

I downloaded Ryan’s original thesis online at Georgia Tech. It’s worth a read: an excellent demographic, geographic and structural history of Atlanta with an architect’s eye for the future. My wife Jan and I greatly enjoyed the free three-hour BeltLine Bus Tour, and biking along the first mile of the BeltLine’s paved path along Peachtree Creek. I look forward to showing my descendants the “new” parts of Atlanta that will be revitalized in the coming decades thanks to Ryan’s – and the city of Atlanta’s – embracing a moment of genius.

Thanks to their efforts, when tourists get off the plane in Atlanta in future years, their first question won’t be, “Where is Tara?” It will be, “Where is the BeltLine?”

Next week in Moments: Josh Starks, who briefly contemplated suicide, making international headlines when an Atlanta musician heard about it on the radio.