A day hiker strolls along a path through woodlands near the future Marsh Creek Trail segment of the Sandy Springs Trail System. Credit: Eric Bern

Sandy Springs has adopted a master plan for a trail system that sets the city on course to build a trail network nearly 10 miles longer than the Atlanta BeltLine. The first 7-mile phase is to be built within a decade – sooner if money can be provided. 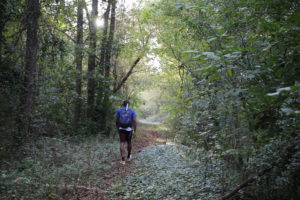 A day hiker strolls along a path through woodlands near the future Marsh Creek Trail segment of the Sandy Springs Trail System. Credit: Eric Bern

Current funding for a trail system includes $750,000 the council provided in the city’s annual budget for the fiscal year that started July 1. Some or all of this money could be allocated to the first model project, a mile-long segment to be built along Marsh Creek.

Sandy Springs Councilmember Andy Bauman was among those who offered glowing remarks of a plan developed with a host of partners – city residents and staff, PATH Foundation, Tucker-based Kaizen Collaborative, and Sandy Springs Conservancy – which provided $25,000 to support the planning effort.

Bauman also is among the city’s elected officials who said they would like to see their city’s trail system be developed sooner rather than later.

“I certainly hope we can accelerate it and do to it as fast as possible,” Bauman said. “I’m realistic, but if we set a faster goal I hope we can accomplish it more quickly. … Let’s see if we can find a way to finance this and fund it.”

Bauman noted that the city’s next shot at a source of significant funding will occur after March 31, 2022. That’s the expiration date of the 0.75-percent sales tax approved in Fulton County’s 2016 referendum for a special purpose local option sales tax, for the purpose of transportation improvements, according to the enabling legislation.

Sandy Springs voters indicated in that referendum a willingness to fund transit through a sales tax. 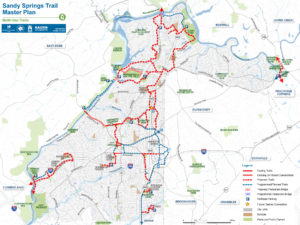 Transit accounts for $57 million funding of transit-related projects when the sum includes $16 million set-aside for design improvements and land acquisition along Hammond Drive. The project is to include a four-lane road with sidewalks, bicycle lanes and transit lanes, according to the project list printed at the end of the enabling legislation.

The Sandy Springs council has been working toward the adoption of a master trail plan since February. That’s when the council adopted Recreation and Cultural Enhancement as a priority area, which included the completion of a Trail Master Plan, according to a background paper that accompanied the legislation adopted Oct. 15. The paper observes:

The first phase the paper references is the 7-mile Marsh Creek Greenway. The greenway is described in the master plan as a 5-mile loop running parallel to Marsh Creek and crossing the Chattahoochee River at Morgan Falls.

The master plan portrays the Marsh Creek Greenway as a “model mile” to gauge public support from the overall trail-building effort. The projected $33.4 million needed for this inaugural phase of the trail is to come from annual earmarks of about $5 million, according to the plan. The source, evidently, is the city’s general fund.

The cost estimate for the trail system’s design and construction is estimated at $122 million, in 2019 dollars, for design and construction, according to the master plan. The plan states that it does not provide an estimate for the cost of land acquisition, but does provide this vision for the potential route – which is similar to the way PATH400 was threaded through neighborhoods along existing rights-of-way rather than through major land acquisitions: