Sandy Springs’ planned Marsh Creek Greenway is to be the first of the city’s planned 31.4-mile network of trails that is to link the city’s parks, Perimeter Center and the city’s central park. The PATH Foundation was chosen to oversee the project. 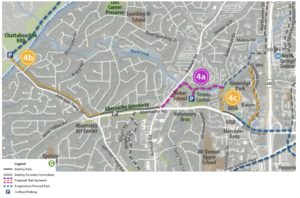 The entire Marsh Creek trail is planned to span a total of 3.2 miles along a portion of a creek that passes near MARTA’s North Springs Station on its journey south, toward Abernathy Road, before angling north and west and ending at the Chattahoochee River, according to the city’s master trails plan.

The first phase of the Marsh Creek Trail is intended to follow the creek along a stretch that passes north of the city’s tennis center and The Weber School. This first stretch of trail is described by the city’s long-range trail plan as a “model mile” that can be built fairly quickly – to show residents that the city can deliver on long-discussed dreams of more public parks and greenways.

This is the project description provided in the master trail plan, which was partially funded by the Sandy Springs Conservancy:

The master trail plan the city adopted in October 2019 describes the first segment of the Marsh Creek Trail in these terms:

This rendering shows the planned Marsh Creek Greenway as it connects to the city’s tennis center and parking area. Credit: Sandy Springs

The city council followed through on the recommendation. At its Feb. 4 meeting, the council retained the PATH Foundation to oversee all aspects of the project – landscape, architecture, engineering, permitting and construction management.

The trail is planned to follow the standards of the region. It’s to be 12 feet wide, multi use, and made of concrete.

Progress on the greenway is about on the schedule suggested in the master trail plan. Engineering was to begin in the current fiscal year, which ends July 1. Construction is to start in July and be complete in about 12 months, according to the timeline.

Ed McBrayer, PATH’s executive director and co-founder, is a staunch advocate of the proposed trail network. PATH had a contract to help design the system and brought in Kaizen Collaborative, a company that has worked on Atlanta’s planned Proctor Creek Greenway Trail, in addition to providing construction designs for more than 100 miles of trails in the Southeast.

In an email comment in June 2019, McBrayer observed of the trail plan in Sandy Springs: