Sea turtles are nesting in near-record numbers along Georgia’s coast this season, continuing a trend that started about a decade ago as the sizable creatures stage a comeback. 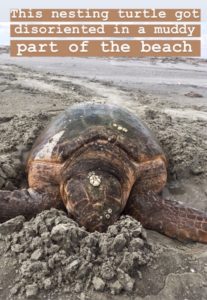 The adventures of this sea turtle, exhausted from her nesting efforts on Sapelo Island, were recorded by Ashley Raybould, a wildlife biologist with the Georgia Department of Natural Resources. Credit: Ashley Raybould, DNR

“The start to the nesting season is above average and the second-highest we’ve had in the last nine years, so that’s really positive,” Mark Dodd, a wildlife biologist with the Georgia Department of Natural Resources said Friday.

Dodd updated DNR’s sea turtle nesting Facebook page Friday morning. The update resolved concerns that the number of nests has dropped this year compared to 2019. The comparison was based on reports posted on the tracking website seaturtle.org.

The number of nests has not dipped, Dodd said. Instead, the discrepancy in reporting is the result of a fact of life on Georgia’s remote barrier islands – phone and Internet service isn’t as reliable as it is in the city.

Dodd remembers the lean years for sea turtle nests. This is his 22nd year in Georgia, and before that he worked in South Carolina with its sea turtle program for about eight years. The situation is improving, he said. 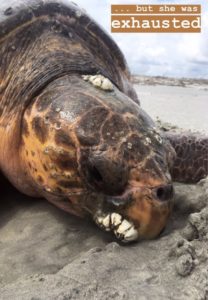 This turtle was clearly weary from her nesting efforts, and appeared to be disoriented on Sapelo Island. Credit: Ashley Raybould

“We documented a decline in the early ‘90s, and since then we’ve seen an increase of roughly 3 percent annually,” Dodd said. “Overall, we’re not out of the woods. But we’re really hopeful about the loggerhead population, and that we’re in a recovery period.”

After Hurricane Dorian lashed Georgia’s coastline in September 2019, concerns abounded over late-season nests. The federal Fish and Wildlife Service determined that more than 50 nests were washed away on two islands, but the final count of nests showed 537 at Blackbeard Island and 480 nests on Wassaw Island, according to an FWS report.

As of Friday morning, 438 loggerhead turtle nests had been counted. This figure is the second highest total over the period, and is above the nine-year average of 337 nests as of this date, Dodd said.

The record number of nests counted in 2019 has fueled hopes for another record-breaking year, Dodd said. That’s not likely, he said, given the amount energy required for a sea turtle to lay eggs. Turtles tend to take a year to recoup their strength before laying another nest. 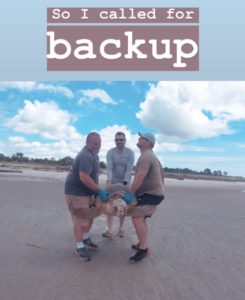 The solution was to transport the weary turtle back to the waters of the Atlantic Ocean. Credit: Ashley Raybould