Reaching for the sky; Seeing Atlanta from the roof-top of the 191 Peachtree Tower

There’s something about roof-tops that I find irresistible.

Maybe it goes back to when my father, an architect who taught site inspection courses at Georgia Tech, would take me and my sister to construction sites.

Or maybe it’s because my mother would take me and my sister to Europe every other summer, and we always sought special vistas where we could get a view of the cities around us.

In Paris, it would be on the top of Notre Dame and the Eiffel Tower. In Salonica, Greece, we would go to the top of the mountain overlooking the city reaching out to the Mediterranean Sea. We would also walk up the stair to the top of the historic White Tower that defines the pedestrian walkway along the sea.

Of course, we visited numerous signature outdoor roof-tops in other major cities, such as the Empire State Building in New York — an icon that has offered the public a perch for decades.

Or maybe it’s because we grew up in an eight-story apartment building, across from Georgia Tech’s administration tower, that had an accessible open-air roof complete with a ping-pong table and a 360 view of Atlanta. 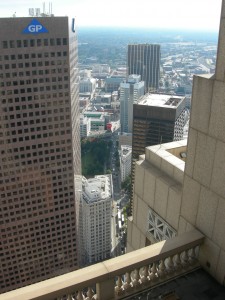 The view from 191 Peachtree looking south. Photos by Maria Saporta

Yet in Atlanta, it’s hard to find open-air roof-tops on our many high-rise buildings. I used to love to go to the Top of the Mart where a wonderful wrap-around outdoor plaza surrounded one of the best places to eat in town.

When the first Colony Square tower was under construction, my best friend Francie and I, accompanied by our boyfriends of the day, had found a way to sneak up to the roof at night where we would spend the evening drinking wine and seeing our city take a new shape. Then, one night we went, and all the doors were locked. 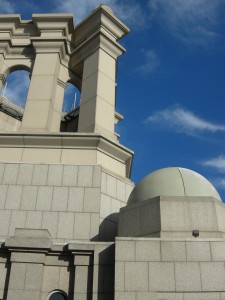 A close up view of the crowns at 191 Peachtree

Maybe it’s our litigious society that has closed off the best views of our city from the public. Maybe it’s our lack of appreciation for public spaces. Or maybe it’s a lack of imagination or architects and developers.

Whatever the explanation, we have prevented the public from embracing the city from its highest vantage points. Instead, the roof-tops of most of our skyscrapers have been turned over to mechanical systems and communications equipment. 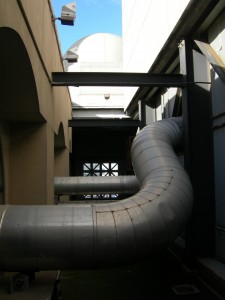 A view of the innards on the 191 Peachtree roof-top

(We do have the Westin Peachtree Plaza’s rotating restaurant where one can get grand views of the city, but everyone is safely enclosed behind glass and concrete).

It may not come as a surprise that my wedding took place on the roof-top of the Ponce Apartments underneath the cupola facing Peachtree Street. On our seven-week honeymoon traveling around Europe, I attempted (unsuccessfully) to help my newlywed spouse overcome his fear of heights by going to the top of the Duomo and a host of other historic structures.

This past summer, my son, David, and spent 10 days in Europe, mostly in Italy where we went to the top of the San Marco bell tower in Venice and the Duomo in Florence among others.

One of the greatest perks I’ve enjoyed as a reporter has been the ability to explore the roof-tops of some of our signature high-rises during construction and write columns about those visits.

I went up to the top of the Bank of America Plaza several times while it was being built, an incredible experience. I also was able to go up to the very top of what is now SunTrust Plaza just after the topping ceremony complete with a tree. Construction workers place a tree as a good luck charm when they have reached the highest point and closed in the structure.

But one Atlanta high-rise roof-top that I had never been able to explore was the 191 Peachtree Tower. 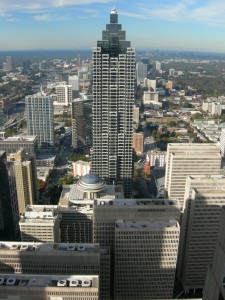 Looking north from the roof of 191 Peachtree

The building is the fourth tallest skyscraper in Atlanta standing 50 stories high at the crest of Peachtree Street. The twin crowns on the top distinguish the building on Atlanta’s skyline.

It was designed by Johnson/Burgee Architects and Kendall/Heaton Associates. It was completed in 1990 as the home for the King & Spalding law firm and the Atlanta headquarters for Wachovia Bank. Both tenants have since left the luxurious building that exudes the richness of our earth with a kaleidoscope of stone, marble and granite.

Cousins Properties bought the nearly-vacant building in 2006 and moved its headquarters there from Cobb County. Now the building is mostly full, and I’m delighted to rent a little office on one of its floors with executive suites.

As part of Breast Cancer Awareness month, the 191 leasing office was offering $10 tours of the building’s roof-top as a benefit for the American Cancer Society.

So last week, one of my closest friends, Kelin Perry, and I joined a few others as we traveled to the very top, first going to the now-vacant 50th floor and then up a flight of stairs to the roof. 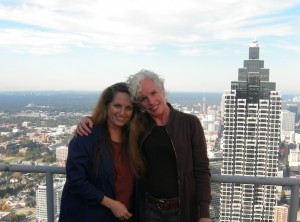 Enjoying the view of 191 Peachtree with my friend Kelin. Photo taken by 191 property manager.

We were lucky to have picked a sunny, clear and warm October day in Atlanta. The tour basically was limited to two vantages — one looking south on Peachtree and the other looking north.

But it was the structures on the roof that were nearly as visually exciting as the sweeping views of our city.

I was reminded that we were seeing Atlanta from a spot that is closed off to the public. My photos are my way of sharing with you what we saw.

It’s too bad these fabulous overlooks aren’t open to all.