Atlanta's future Westside Park at Bellwood Quarry is adding to the gold-rush mentality that has land speculators and developers crowding into the area. Atlanta is poised to implement a 180-day moratorium to devise controls that are to regulate housing prices and mobility. Credit: Atlanta Parks & Recreation via parkatbellwoodquarry.com
Share96
Tweet
Share
Pin
Pocket
WhatsApp
Buffer7
Email
Reddit
103 Shares

The Atlanta City Council is on track to establish a six-month moratorium for most new development in the gold-rush neighborhoods around the city’s future Westside Park. Mayor Keisha Lance Bottoms initiated the moratorium on Feb. 17. 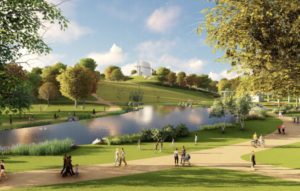 Atlanta’s future Westside Park at Bellwood Quarry is adding to the gold-rush mentality that has land speculators and developers crowding into the area. Atlanta is poised to implement a 180-day moratorium to devise controls that are to regulate housing prices and mobility. Credit: Atlanta Parks & Recreation via parkatbellwoodquarry.com

“This is historic,” Charletta Wilson Jacks told the Zoning Committee, which approved the measure Wednesday morning. Jacks serves as the mayor’s senior governmental affairs advisor, and has 16 years of previous service as a top administrator in the city’s Planning Department.

The council is slated to adopt the moratorium at its meeting March 2. The 180-day moratorium is to begin the day the mayor signs the legislation, or it otherwise becomes effective.

The purposed of the cooling off period is to provide time for the city to devise measures to regulate issues including housing costs and mobility in the area. Several city departments are to work on measures that are to be presented to the council for its consideration.

Bottoms implemented a moratorium through an executive order issued Feb. 17. The mayor’s order is effective only through the date of the next council meeting, which is March 2. The moratorium is to lapse if the council does not extend it.

The moratorium covers most new development. The current version does not apply to:

The council’s approval on March 2 is expected because two council committees have adopted the measure by unanimous vote – on Wednesday morning by the Zoning Committee; and Tuesday, Tby the Community Development Committee. These unanimous votes place the item on a part of the council’s agenda where all the legislation listed therein is approved by a single vote.

The legislation to be considered by the council includes this substitute and this amendment.

The purpose of the moratorium is to provide a cooling off period in the Westside. The goal is to use the time to devise a series of proposals to manage the consequences of the region’s fast pace of residential development. Housing costs and mobility are specific concerns cited in the legislation. 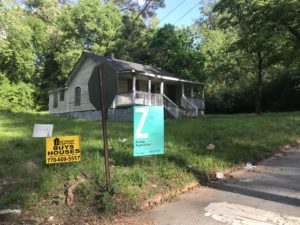 Atlanta is poised to enact a 180-day ban on most new construction in the city’s Westside neighborhoods, where speculators have been purchasing land and houses. File/Credit: David Pendered (2018)

The legislation cites a series of desired outcomes:

The city itself has added to the gold rush that’s been underway for years in neighborhoods near the future Westside Park at Bellwood Quarry. The city bought the site of a former quarry nearly 20 years ago, during the term of then Mayor Shirley Franklin.

The city’s website for the park highlights the development expected around the park: