An engineering marvel of a bygone era will be retained in Rogers Bridge as its replacement is built across the Chattahoochee River to connect parks in Fulton and Gwinnett counties. 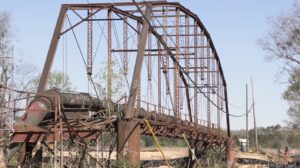 The lacy latticework of the decrepit Rogers Bridge will be replicated in a new pedestrian bridge that is to link the future Cauley Creek Park, in Johns Creek, with Rogers Bridge Park, in Duluth. Credit: news.duluthga.net

Construction has started on the project that’s been in the works since 2006. The ceremonial groundbreaking was March 29 with representatives of the four governments that joined forces to complete the bridge – the cities of Duluth and Johns Creek, and the counties of Fulton and Gwinnett.

The new pedestrian version of the Rogers Bridge is to connect parks in the two cities – the future Cauley Creek Park in Johns Creek and Rogers Bridge Park in Duluth.

As such, the new bridge is the latest in an emerging effort in metro Atlanta to build pedestrian bridges across waterways and highways in order to extend trail systems and link greenspace. Other examples include the bridge across Peachtree Creek, in Buckhead, and the planned pedestrian bridge across U.S. 41 that’s part of the Noonday Creek Trail, near Kennesaw.

After years of discussion over the benefits of preserving the old Rogers Bridge or building a new bridge, the state Department of Natural Resources determined the old bridge was too decrepit to salvage. Simultaneously, an effort was underway for the replacement to replicate its ancestor. 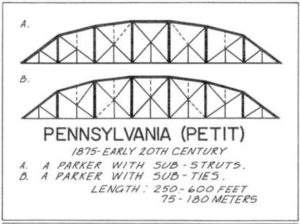 The Pennsylvania (Petit) truss was a design produced in the engineering labs of the Pennsylvania Railroad that proved capable of transporting heavy trains across long distances at an affordable price for construction. Credit: nps.gov

The design of the bridge is significant – a metal truss bridge of a design that originated in the labs of the Pennsylvania Railroad. PRR was chartered in 1846 and was the world’s largest railroad corporation before a successor went bankrupt in 1970, was folded into Conrail, which itself was split up. Conrail’s PRR assets were acquired by Norfolk Southern Railway.

Metal trusses were a favored material for bridges and other structures at the dawn of the railroad era of the mid 1800s. For railroad bridges, metal trusses could accommodate the ever-increasing weight of locomotives and rolling stock, which was a much heavier load than was required of a highway bridge.

The original Rogers Bridge was a Pennsylvania (Petit) truss design held together with metal pins. Spanning 228 feet, the bridge is the longest single-span bridge in the state and was eligible for the National Register of Historic Places, according to a report by Trust for Public Land. This potential designation is one reason DNR became involved, through its Historic Preservation Division.

In a sense, the bridge was overdesigned for its use across the Chattahoochee River when it was built, in the early 20th century.

Bridges of this design are capable of spanning from 250 feet to 600 feet. The original Petit design could stretch up to 250 feet. Modifications extended the capacity considerably – to 600 feet for both the Baltimore (Petit) and Pennsylvania (Petit) designs used from the early 1870s to the early 20th century, according to a report posted by the National Park Service, “Trusses: A Study by the Historic American Engineering Record.” 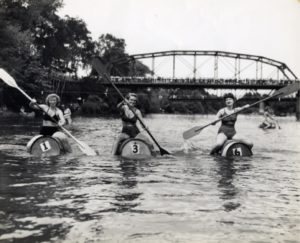 The Healdsburg Memorial Bridge in Sonoma County, Ca., a Pennsylvania (Petit) metal truss bridge, was the vantage point for ‘events ranging from Amateur Athletic Union-sanctioned swimming meets and wine barrel races to holiday parades of festively decorated watercraft,’ according to a registration for listing on the National Register of Historic Places. Credit: From the application. Photographer unknown; Property of Healdsburg Museum. Date Photographed: August, 1946

The historic significance of the Pennsylvania (Petit) metal truss bridge is described fully in an registration form submitted for a bridge of such design in Sonoma County, across the Russian River, where it was part of the famed Redwood Highway. The registration form observes:

Previous Article
Georgia vs Colorado: Who does voting better?
Next Article
Morris Brown Challenged Other HBCUs to Support Delayed Boycott