Socially distanced candidates stuggle to control their messages, and their laptops

You could see the very picture of a politician’s frustration in this socially distant campaign season about eight minutes into the Atlanta Press Club’s first-ever Hollywood Squares-style debate, broadcast Sunday morning on Georgia Public Television.

As he realized that no one was hearing him, a look of concern began to spread over the face of Eugene Yu, a Republican candidate in the 7th District congressional primary. It deepened as he realized he could no longer hear anyone else, either. He raised his hands in exasperation after struggling with his laptop and headphones, and then, when at last it all worked, in relief.

There were many shaky moments like this in the 10 primary debates, seven of them broadcast and three others were livestream-only, which the press club conducted remotely Sunday and Monday. But the exercise gave the candidates an opportunity to introduce themselves to voters, and demonstrate their teleconferencing skills as well.

“I’ll now host the show,” 9th District Republican candidate Kellie Weeks said in a quick-witted moment when moderator Rickey Bevington stepped away from the camera to plug in her dying laptop. Social distance is encouraging a kind of do-it-yourself democracy. 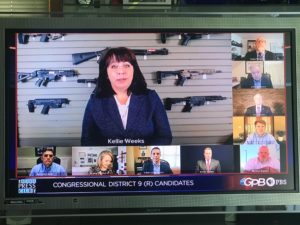 Candidate Kellie Weeks, a gun saleswoman, with a collection of guns in the background. Weeks joined her fellow 9th District Republican candidates during the Sunday debate (Photo by Maria Saporta)

Just as the tiny delays involved in connecting several participants remotely gave these debates a jarring feel at times, the candidates’ responses often felt a little out of synch with where things are politically.

There have been reports that Republicans in Congress have begun some distance between themselves and President Trump, but in these debates, Republicans were still challenging each other’s loyalty to the president as the first measure of their electability.

The Democrats talked here and there about mounting new infrastructure programs and making taxes fairer, but they never really engaged with each other over how to do these things in a cratered economy, or how to fashion an agenda for a post-pandemic America. Neither party’s candidates demonstrated convincingly that they understand the enormity of the changes that have been wrought, or lie in the future.

The featured event of these primary debates was the (virtual) meeting of the Democrats vying to run for the U.S. Senate seat held by David Perdue. This is an interesting race.

If Sen. Kelly Loeffler is in hot water over her stock transactions during the pandemic, and polls show she is, then by rights Perdue should be too. He also sold off a lot of vulnerable stocks on early word of the coronavirus, and bought a lot of stocks likely to do better in the pandemic.

But the two races have an asymmetrical relationship. Because it’s a rare jungle primary and has generated a juicy rivalry between Republicans, Loeffler and U.S. Rep. Doug Collins, Georgia’s other Senate race has attracted much more attention than this one.

The conventional wisdom is that the scramble of the jungle primary race gives the Democrats the best shot at winning. That’s assuming chaos helps the Democratic candidate, and it doesn’t. The attempt by party leaders to enshrine the Rev. Raphael Warnock as the consensus Democratic candidate hasn’t exactly gone smoothly, even though he’s polling ahead of Loeffler. It takes a lot of Republican money off the table if she gets knocked out of the first round in November, but that still leaves Collins sailing into a January runoff with a tremendous tailwind from knocking Loeffler off.

On the other hand, if one of the six Democratic candidates vying to challenge Perdue comes out of the primary with a solid, unifying win, they get a clean shot at a one-term incumbent, on a day when Democratic turnout might reach record levels.

Jon Ossoff, who drew national notice but lost a close congressional race against Karen Handel in 2016, led the field with 31 percent in an AJC poll conducted in March.  Former Columbus Mayor Teresa Tomlinson and 2018 lieutenant governor candidate Sarah Riggs Amico tied for second with about 15 percent. Since then, Ossoff and Tomlinson have launched their TV ad campaigns.

Another way to determine who’s the frontrunner, accurate as most polls in a race like this, is to look at who takes the most shots from the other candidates in a debate like the one broadcast Sunday afternoon. By that standard, Tomlinson is the frontrunner.
Even if he attracted less notice after taking an early jab from Tomlinson, Ossoff closed strong, and was the only Democrat to articulate something of how he’d run against Perdue. This race is going to be good training for the uphill battle the Democratic nominee will face this fall.