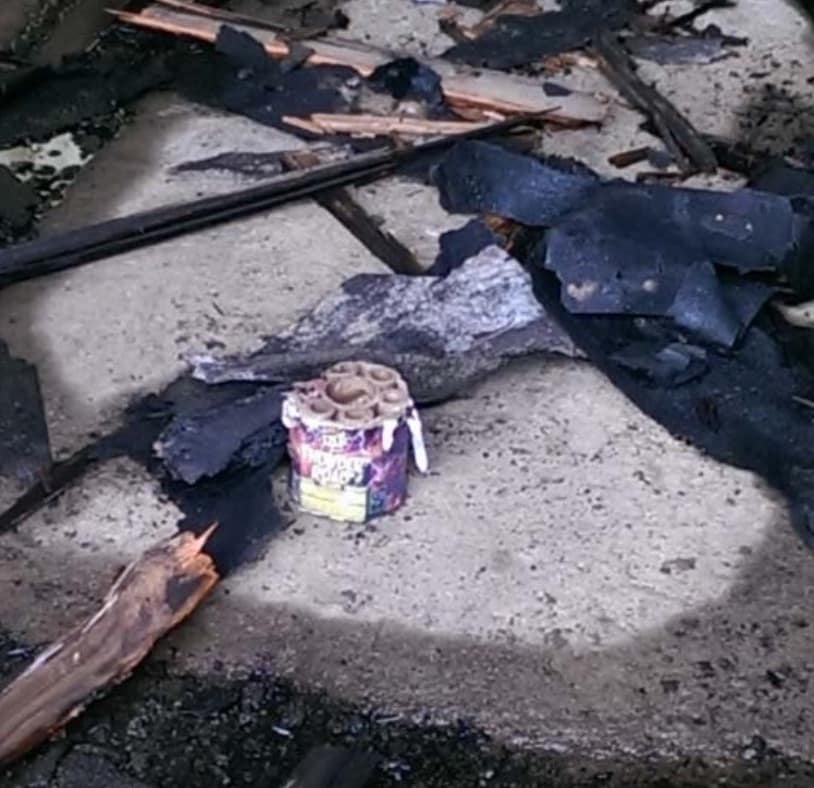 Georgia moved quickly to sell Pullman Yard after a bucketful of sky rockets ignited inside a warehouse at Pullman Yard during a celebration July 4, 2016. The resulting fire burnt a hole through a portion of the roof. File/Credit: GBA
Share9
Tweet
Share1
Pin
Pocket
WhatsApp
Buffer
Email
Reddit
10 Shares

The pending sale of Pullman Yard has elicited more than interest from developers and politicians. The sales process prompted the state to release a trove of information about the site – including the reason behind a fire that burnt a hole through a roof last summer. 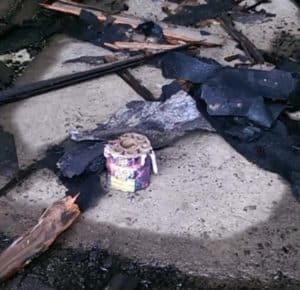 A bucketful of sky rockets ignited inside a warehouse at Pullman Yard during a celebration July 4,12016 resulted in a fire that burnt a hole through a portion of the roof. Credit: GBA

Fireworks were lighted inside a warehouse, evidently as part of someone’s July 4 celebration. Inspectors recommended that debris be cleaned and that no portion of the roof deck should be available for the filming of outside shots for TV shows or movies, according to an engineer’s report last modified on Jan. 23 that noted:

Sixteen other documents are included in a package of structural and environmental files the state has released in the bid packet. April 4 is the deadline for bids, according to the state’s invitation to bid document.

Meanwhile, two state senators have filed a resolution asking the state to take steps to protect the historic amenities on the property. Sen. Vincent Fort (D-Atlanta) and Sen. Elena Parent (D-Atlanta) filed Senate Resolution 180. The resolution was assigned to the Senate’s State Institutions and Property Committee. 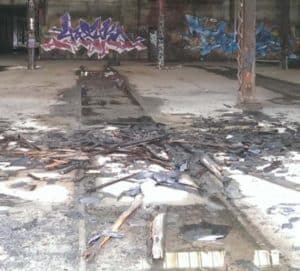 This pile of charred debris fell from the roof of a warehouse at Pullman Yard, where a fire caused by fireworks ignited inside the building caused the roof to burn. Credit: GBA

The committee is scheduled to convene Friday at 1 p.m. in the Capitol for its the first meeting of the legislative session. The only item on the agenda is the adoption of rules. The chairman, Sen. Ed Harbison (D-Columbus), reserves the right to amend the agenda.

SR 180 calls for the Senate to observe that the Georgia Department of Natural Resources has the power and duty to preserve structures of, “historic significance, such as those found at the Pratt-Pullman Yard.” The resolution requests the Georgia Building Authority to set deed restrictions around historic and environmental aspects of the site.

The committee now has two items in its purview: SR 180, and Senate Bill 104. The later requires most government buildings to have signs advising victims of sex trafficking where they can seek help; it was sponsored by Sen. Donzella James (D-Atlanta).

The protection of the historic structures and preservation of Hardee Creek do not appear to be contingent on the state taking any action. Such restrictions are likely to be imposed by Atlanta after the sale of the property. 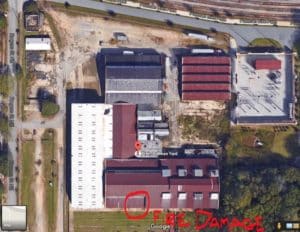 The red circle on the bird’s-eye view shows the location of a portion of the roof at Pullman Yard damage by fire caused by fireworks shot off inside the building during a July 4, 2016 celebration. Credit: GBA

Although the state did prevail in its request filed last year that Atlanta not extend any historic protection status to Pullman Yard, citing immunity, the entity that purchases the property will be subject to the city’s historic preservation ordinances.

Once the property is no longer under state ownership, the city can re-file the paperwork to have the site designated a historic site. That’s because the board that oversees Atlanta’s Urban Design Commission voted to allow the proposal to be withdrawn and denied without prejudice – meaning the paper can be re-filed at any time.

All the concern about historic and environmental preservation may be moot. It depends on the outlook of the entity that purchases the property.

More than 30 individuals attended a Jan. 18 pre-bid conference hosted by the Georgia Building Authority, according to the sign-in sheet. Several who attended work with companies that have, in the past, completed projects involving adaptive reuse of historic properties.