The lure of economic development prompted voters in the City of South Fulton to authorize the creation of special tax districts that could spur growth along corridors that once were vital industrial areas, such as Fulton Industrial Boulevard and Old National Highway – and possibly even along the Chattahoochee River. 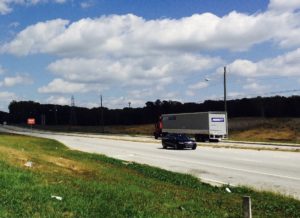 Portions of Fulton Industrial Boulevard in the City of South Fulton could be targeted for development if city officials to use their new authority to create TADs to establish one in the sparsely development corridor. Credit: David Pendered

The authorization for the city to create tax allocation districts is the second significant incentive in economic development voters have approved. City voters in 2018 approved freeport exemptions, which have a record of attracting warehouses and light manufacturers by freeing from property taxes the materials used to make goods, and the finished goods themselves.

Both incentives play to the historic economic strength of a two-year-old city that swept up much of the unincorporated land south and west of Atlanta’s airport.

Nearly a quarter of the jobs in the city are in the wholesale trade sector, meaning warehouses, according to a study conducted this year at the behest of the city – Demographic and Economic Trends. By comparison, warehouse jobs account for 5.5 percent of jobs in metro Atlanta.

The warehouse jobs sector has seen solid growth during the first half of this decade, adding 1,227 jobs in the five-year period from 2010 to 2015, according to the study. That compares to growth in other sectors that added a large number of jobs of 505 jobs, in lodging and food service, and 410 jobs, in finance and insurance, according to the report.

The city hired BAE Urban Economics to conduct the study. The company has several U.S. offices and states on its website that its specialty is, “urban economics and real estate advisory consulting practice.”

Mixed use developments are another likely target for the TAD incentives. South Fulton’s growth rate tops that of all of Fulton County – which includes Atlanta – and the region of metro Atlanta, according to BAE’s report. The growth numbers from 2010 to 2018, according to BAE, are: City of South Fulton, 17.6 percent; Fulton County, 12.9 percent; metro Atlanta, 11. 4 percent. 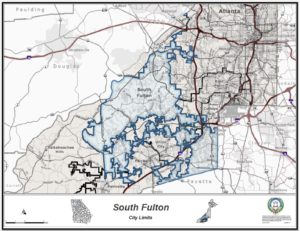 Voters in the City of South Fulton approved a proposal to establish TADs, which are tax incentives to spur economic development. The city covers much of what had been unincorporated Fulton County, west and south of Atlanta. Credit: City of South Fulton

The Nov. 5 referendum to authorize the city to establish TADs was the first of what would be a journey of many steps for the city. Future steps to establishing one or more TADs could include asking potential partners – the county government and school system – to join in the effort. The other governments don’t have to participate, but their financial support greatly enhances the ability of TADs to use the power of rising property values to pay for improvements that tend to attract additional growth – improvements such as roads, sidewalks, parks, and public safety facilities.

By a margin of 3:1, in unofficial results reported by Fulton County, voters approved a straight-up ballot question:

The notion that South Fulton now can offer the same type of economic development tool at the disposal of nearby Hapeville and Atlanta could be significant in coming years.

The hotbed of mixed use growth that is spilling westward from the old quarry, which Atlanta intends to start filling next Spring and turn into a water reservoir surrounded by the city’s largest park, could cross into the City of South Fulton and any mixed use projects that could be built in a potential TAD along Fulton Industrial Boulevard.

Some of the areas that are within the City of South Fulton include: