Part of the historic section of South-View Cemetery, dating to 1886. (Photo by John Ruch.)

The 136-year-old cemetery at 1990 Jonesboro Road in Southeast Atlanta is a cornerstone of the city’s African American culture — the final resting place of dozens of legendary leaders and thousands of regular folks. Its directors are exploring ways to improve historic preservation and community activity without spoiling its integrity and dignity. 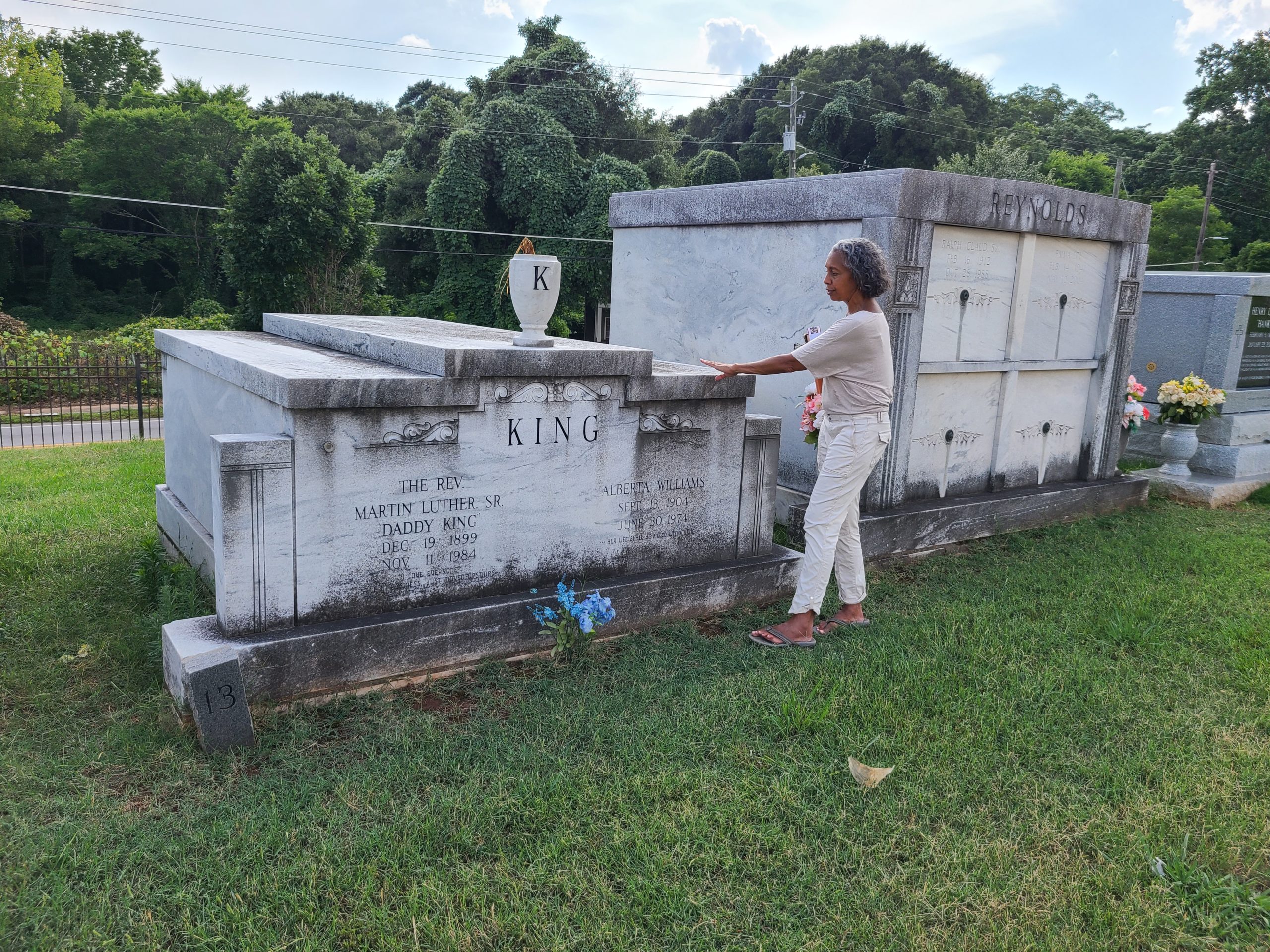 Winifred “Winnie” Watts Hemphill, president of the South-View Cemetery Association, gestures to the crypt of Martin Luther King Jr.’s mother and father. King was temporarily interred in the crypt as well before his entombment at the King Center. (Photo by John Ruch.)

Those are challenges similar to the entire South River Forest, a concept of connecting 3,500 acres of existing and new green spaces in Southeast Atlanta and southwest DeKalb County. On June 29, several members of that effort’s steering committee took a tour of the cemetery to consider adding its 100 acres to the plan.

Leading the tour were Winifred “Winnie” Watts Hemphill, president of the South-View Cemetery Association and great-granddaughter of one of its founders, and Charmaine Minniefield, who has created history-centered art installations at the cemetery.

Hemphill outlined the cemetery’s founding in 1886 by a group of formerly enslaved men who had become successful in business. They started with 25 acres of farmland that white people considered “tainted” because a Black baby already had been buried there, Hemphill said. Today more than 90,000 people are buried there, and it remains active, with more than 500 burials a year — a figure up about a hundred from pre-COVID years.

On the disturbing side of history, there are graves of several victims of the 1906 Atlanta Race Riot, a series of white racist mob attacks on Black neighborhoods that murdered many people and destroyed homes and businesses. Recent burials, Hemphill said, include several victims of today’s plague of gun violence — one of them only 15 years old. 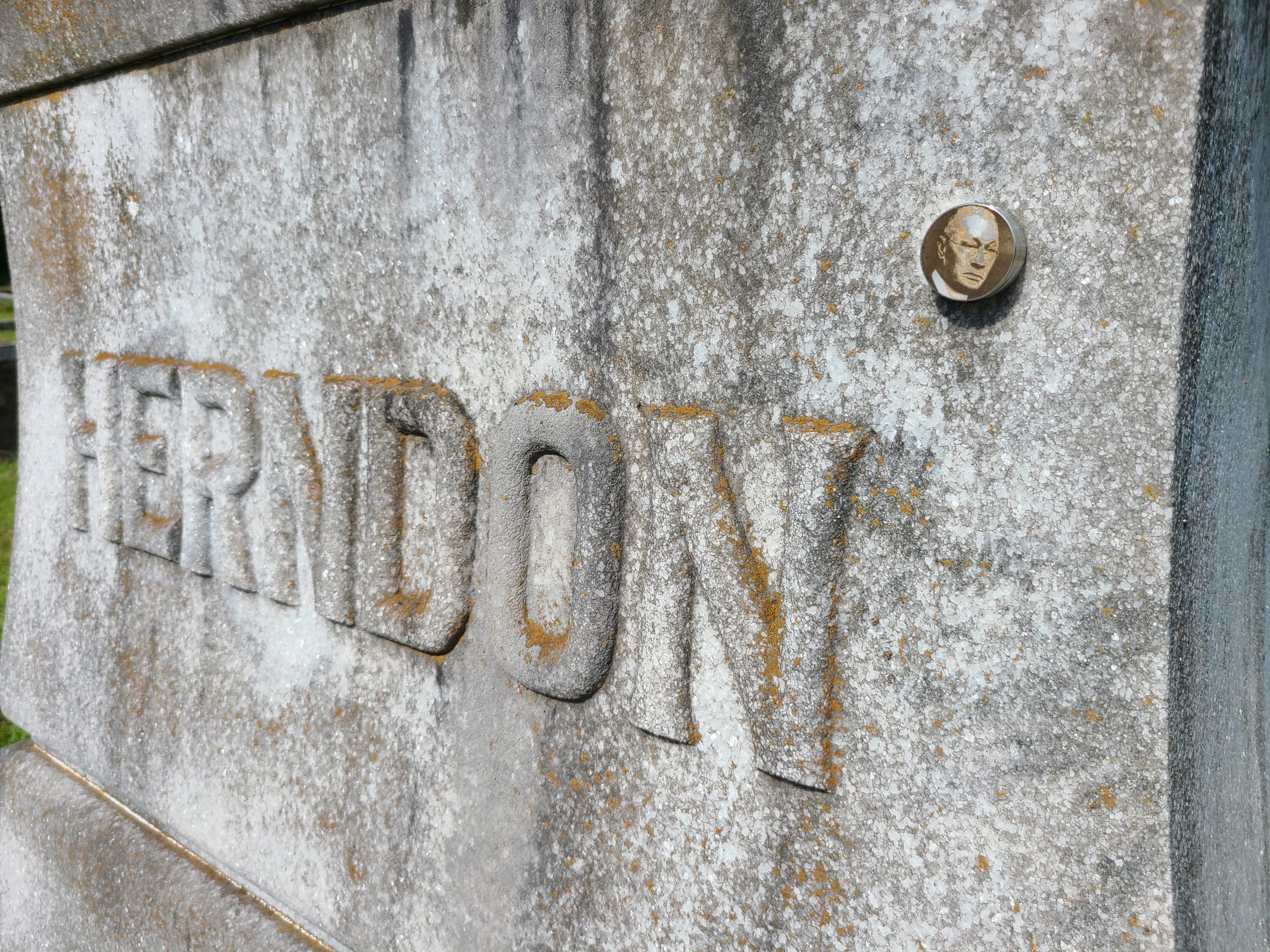 The gravesite of Alonzo Herndon, a business leader who was among the founders of the Sweet Auburn district. (Photo by John Ruch.)

She said she would like the cemetery to become an inspiration about the “greatness” of Atlanta’s Black culture to young people who might think of African American history only in terms of the degradations of slavery.

But exactly how to do that comes with challenges that contrast with Atlanta’s better-known Oakland Cemetery, an elite and relatively well-financed institution that recently drew the mayor to a ribbon-cutting of its restored African American Grounds.

One factor is local cultural differences in viewing a cemetery as a park. “Our community still doesn’t really want to go visit a cemetery,” said Hemphill.

She would like to host more events but is wary of imitating some of those at Oakland that involve bands and alcohol. South-View is still a place of daily burials, she noted, and needs to maintain an air of quiet and respect.

Minniefield has staged a cultural installation called the “Praise House Project” at both Oakland and South-View, among other locations. At South-View, she said, neighbors had to be reassured her work was not some kind of Halloween novelty haunted house.

Minniefield also raised the issue of the lack of a perpetual care fund for the historic area of the cemetery. She noted that in the early days, graves were cared for by picnicking families on Decoration Day — now known as Memorial Day — and during similar events where oral histories were shared. Since 2004, the cemetery has had the nonprofit Historic South-View Preservation Foundation to aid that original section, but Minniefield and Hemphill indicated more help is needed. 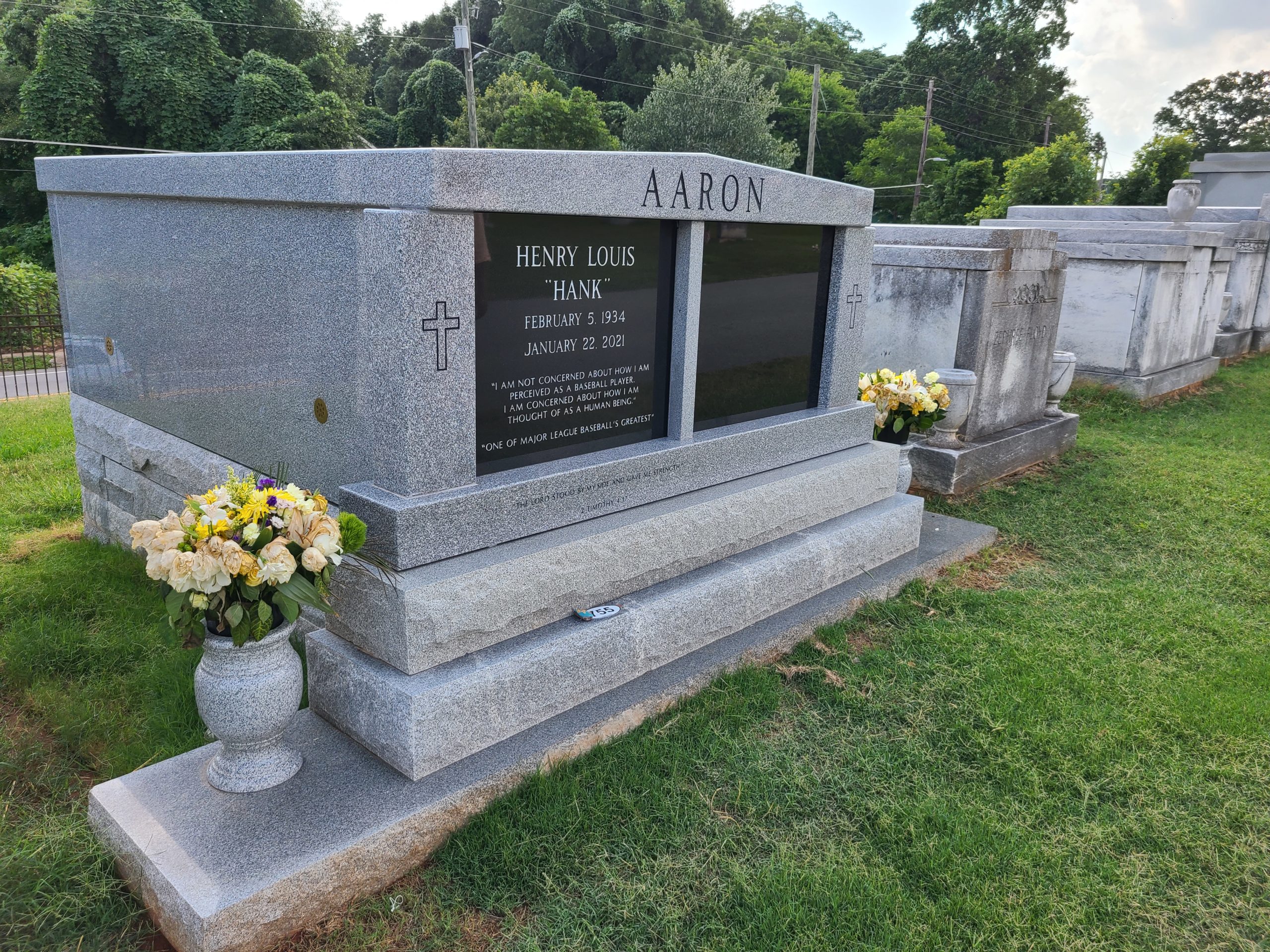 The tomb of baseball great Hank Aaron, where visitors left various items, including a baseball. (Photo by John Ruch.)

“We would love to see some way this is always taken care of,” Minniefield said while touring the historic section.

History can never be retold too much, as the steering committee tour showed. A couple of members weren’t even aware that Dr. King is entombed in Atlanta, let alone that he was temporarily interred after his assassination in the family crypt at South-View, which still bears what Hemphill said is a bullet scar from when racists cruising down Jonesboro Road would “do a drive-by shooting on the back of the crypt.”

Mollie Bogle, the Atlanta Regional Commission senior planner leading the South River Forest process, said the tour was part of an effort to teach the steering committee about “not only natural resources but cultural resources” in the area — including some, like South-View, that are outside the currently sketched boundaries that are open to expansion. Bogle said her team is planning further field trips, including to another institution outside the current boundaries: the City of Atlanta’s Browns Mill Golf Course.

Among those joining part of the lengthy tour was Ryan Gravel, the urban planner behind the Atlanta BeltLine and the lead author of The Atlanta City Design, an official City planning vision that included an early version of the South River Forest.

“South-View Cemetery is an amazing place and an important historic resource for Atlanta,” Gravel later told SaportaReport. “I learned a lot about it on our tour the other day. And because we have always envisioned human life and culture as integral elements of the South River Forest, showcasing the cemetery as one of its many protected green spaces makes a lot of sense.”

“Cemeteries have always been places for the living to connect with our past,” he continued. “And not long ago, people went to cemeteries to relax [and] to commune with history and nature, and they often brought elaborate picnics. That was true at South-View, and it’s cool to imagine how it might play a similarly visible role in our future.”

Hemphill discusses the grave of Frank Smith, one of the victims of the 1906 Atlanta Race Riot. (Photo by John Ruch.)

The South-View Cemetery Association office. Among the graves in the foreground is that of Walt Bellamy, a basketball star and cemetery board member. (Photo by John Ruch.)

The original cemetery entrance in the historic section. (Photo by John Ruch.)

Hemphill at her family’s gravesite in the historic section. (Photo by John Ruch.)

The bullet scar in the rear of the King family crypt, said to be the result of one of several drive-by shootings by racists while Martin Luther King Jr. was interred there. (Photo by John Ruch.)

An overview of a section of South-View with more recent burials. (Photo by John Ruch.)