A vision and volunteers turn a toxic dump into Zonolite Park 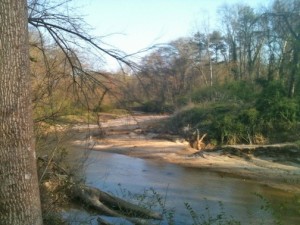 A raccoon’s muddy tracks are a small shining symbol of the transformation of an asbestos-laden wetland into a new public park in northeast Atlanta, and the perseverance of volunteers who envisioned that nature could trump industrial pollution.

Zonolite Park “was land that nobody else wanted,” said DeKalb County Commissioner Jeff Rader, who celebrated last week with the South Fork Conservancy, the nonprofit group that is replanting the grounds and making trails to connect with other Atlanta parks. The project, he announced, was just awarded $100,000 in federal matching funds for trail building.

The volunteers marked a year from the completion of the federally ordered cleanup of the site, which at $2 million is but a sliver of  the largest cash settlement ($250 million) in the history of the Environment Protection Agency. The park’s reinvention also shows how a supply chain can bring in business and killer byproducts. Reversing that damage took a chain of volunteers willing to help restore the ecosystem.

From 1950 to 1970, Zonolite was a popular attic insulation processed in northeast Atlanta. The raw mineral later was found to have natural asbestos fibers. (Credit: Asbestorama)

Zonolite Park is 12 acres near Briarcliff and Clifton Roads, where the South Fork of Peachtree Creek parallels railroad tracks. For two decades beginning in 1950, freight trains stopped at the W.R. Grace Co. plant and dumped as much as 1,225 tons of raw material for attic insulation marketed as Zonolite. Grace was an important business in DeKalb County, and the street where the plant was located was named Zonolite Road.

But Zonolite’s raw material carried natural asbestos fibers, and the Montana mine where it was dug ended up the target of a massive EPA investigation. Grace Co. executives were indicted in 2005 for knowingly placing the town of Libby, Montana, in danger and later covering up their actions. They were acquitted in 2009, but the company had filed bankruptcy and abandoned its Atlanta site. A Montana judge had to approve the $2 million needed to remove 27,000 tons of contaminated soil at what would become Zonolite Park.

Enter the Conservancy, which pulled together volunteers to cut through privet and vines to make preliminary trails that lead through the wooded parts of the track and down to the creek. Since November, the conservancy spent $10,000 to restore bushes and trees that are native to the park, such as red maple trees and sassafras and blueberry bushes. 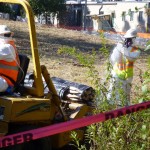 “We think the fur is really going to fly now here that we have the support of federal money, through the state, through the county with the support of all of you,” South Fork Conservancy executive director Sally Sears said to last week’s gathering of supporters.

Tracks made by raccoons, deer and herons suggest that animal life is returning to the once blighted stretch of land. Conservancy leaders and supporters of the project hope the humans will follow. They already frequent nearby businesses such as Floataway Cafe and Briarcliff Animal Clinic.

“Our intent over time, and I suspect I won’t be able to see it, is to connect all of the South Fork [of Peachtree Creek] from Tucker and Decatur to the Belt Line,” said Bob Kerr, chairman of the conservancy. 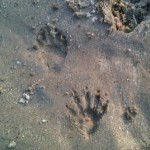 One motivation is to restore nature to car-bound Atlanta citizens, we who have become increasingly disconnected to the rhythms of streams and peacefulness of wooded trails. Unlike industry, “natural systems are in constant rejuvenation,” said conservancy treasurer Billy Hall.

“We are remarkably fortunate to have this river system that is actually intact. Now it’s greatly impaired, but we have the opportunity by putting ourselves back as part of it,” he said.

Previous Article
Invest Atlanta hoping to attract energy of young entrepreneurs to town
Next Article
In PR, we are always looking for the next big thing. After the past few weeks, I’m convinced you are looking at it.