Ordinarily I would be thrilled to see one of Atlanta’s premier cultural institutions doubling in size and attracting a world-renowned collection as significant as Jim Henson’s puppets.

But my heart literally dropped to my stomach when I saw the design for the proposed expansion of the Center for Puppetry Arts.

Here is an institution devoted to the preservation and to the artistry of puppets from around the world, and yet the Center for Puppetry Arts has totally ignored the significant history and urban context of its own location — the former Spring Street Elementary School.

In fact the expanded design of the Center will completely shield the historic Spring Street school from Spring Street — with a window-less, bland structure built to house the Henson collection.

Back in 1978, the Center moved its home to the former Spring Street Elementary School — the first elementary school in Atlanta to be integrated — with the children of Coretta and Martin Luther King Jr. and Juanita and Ralph David Abernathy.

My sister and I had the good fortune of attending Spring Street from kindergarten to 7th grade. It was a  place where notable Atlantans had gone to school for decades. And although it has been closed since the mid-1970s, the alumni of the school maintain a facebook page and hold the memory of the school close to their heart.

How the development will look from the parking lot — see how the new building jets out on the left side of the school.

When the Center for Puppetry Arts moved to Spring Street, the move was embraced. The school would be preserved and given new life as a place that would delight children and adults alike. My children loved going to shows to the Center and taking puppet-making workshops. And it always was nice to walk down the halls of my memories — remembering my teachers, my friends and principal Francis Douglas. 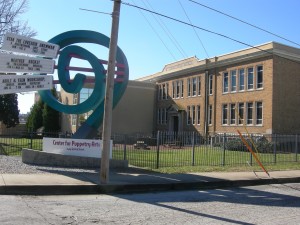 Current view from Spring Street of the Center and the school. (Photos by Maria Saporta)

I even gave the Center a pass when they altered the front of the school by constructing an addition that was not in keeping with the architectural lines of the building.

At least most of the front lawn was intact. At least one could still visualize that the building had once been a school and that this part of Midtown had once been part of  a residential neighborhood.

On Tuesday, Jan. 14, the Center for Puppetry Arts had a media event to celebrate and announce the 15,000 foot, $14 million expansion of their building to house the valuable Jim Henson collection.

It was the first time many, if not most, of those present had seen the renderings for the new design. When I saw that the view of Spring Street school would be obliterated by the new building from both the sidewalk and the street, I literally lost my breath.

The expansion will take up the entire front lawn in front of Spring Street — creating a curtain wall with no relation to the street or sidewalk. 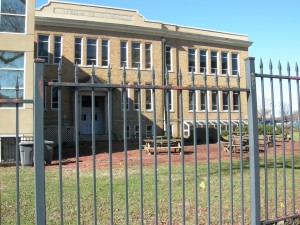 Steve Jones, the senior project manager with Heery International, explained that the new building had no windows because the collection is very sensitive to UV light.

When I asked why they didn’t put the expansion on the back side of the building, board member John Chandler explained the Center needed all that space for parking.

“The footprint is to provide parking,” Chandler said, adding that the Center’s expansion budget was limited. “I’m proud of what we’ve done.”

Vincent Anthony, founder and executive director of the Center for Puppetry Arts, rightfully said that the building had received all the necessary approvals — in this case, that meant the Midtown Development Review Committee. 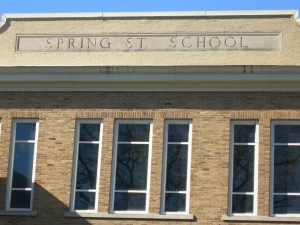 According to Jones, the Midtown DRC unanimously approved the expansion project.

And that’s what I can not understand. This project flies in the face of everything that I have been led to believe about what BluePrint Midtown and the special zoning for the district stands for.

Midtown has tried to encourage architects to design buildings that have a human scale with the street and sidewalks in the community. That means having retail spaces on the ground floor or pleasant places to the human eye — such as green space or pocket parks. 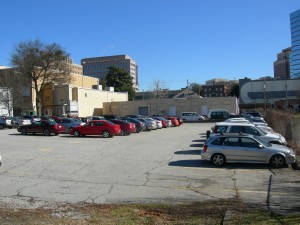 The special zoning also has been trying to limit surface parking lots in an effort to create a more walkable, pedestrian-oriented community. In the last 15 years or so, the Midtown Alliance has fought hard to get developers to minimize their parking  especially surface lots. Usually they encourage developers to structure their parking — burying it or hiding it from view while keeping people-oriented activities on the street level.

The expansion plans for the Center for Puppetry Arts seem to go counter to all of Midtown’s development guidelines — a new faceless building with no uses that relate to the street, a new development that does not respect the historic and urban texture of the community, an expansion that removes green space in order to preserve surface parking spaces and a structure that discourages the establishment of a walkable environment. 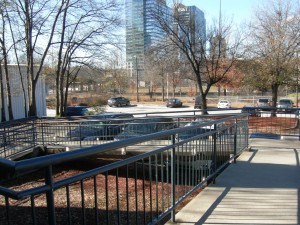 Kevin Green, president of the Midtown Alliance, said he did not attend the Midtown DRC meeting when the Center’s expansion was discussed. But he did defend the committee’s work. For a list of the members, please see below.

“It is a pretty impressive and thoughtful group,” Green said. “They know what we are trying to achieve. And they are not afraid to stand up to projects they don’t like.”

But Green said he could understand my concerns. The sad part is that apparently there is no way for the community to appeal the decisions that are made by the Midtown DRC — so it looks as though this unfortunate design will be built.

As a proud former Spring Street student and as someone who has admired the Center for Puppetry Arts,  I’m so disappointed that we couldn’t have come up with a better solution that would have served the needs of the Center, respected our urban  landscape and protected Atlanta’s fragile history.

Preserving puppets is a noble cause. But preserving our city is even more noble.