‘Spy’ – movie has feminist streak – but is mostly whip-smart hilarious 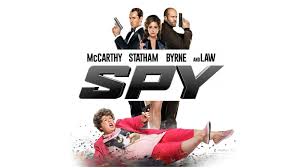 By now, “Spy” has been chased out of the No. 1 box office slot by “Jurassic World’s” mob of dinosaurs. Still, attention must be paid  – as Linda Loman once said of her salesman husband, Willy – to an espionage caper starring a woman. Especially one that was itself a box office topper.

“I couldn’t do what I do without you in my ear,” he coos, unwittingly echoing what William Hurt’s pretty-boy newscaster said to Holly Hunter in “Broadcast News.”

Susan’s moonstruck response is all too clear: she’d much rather be attached to some other part of his body. But Law, whose way with a quip and a wink would make Sean Connery chortle, sees her as, well, the type of woman to whom you give a necklace with a cupcake on it. Rubbing salt in the wound, he notes earnestly, “It’s so you.”

All that changes when Eurotrash Bad Girl Rose Byrne lets Langley know that the identities of all its top field operatives have been compromised. CIA chief Allison Janney has no choice but to send Susan on assignment in search of Byrne’s Big Bad Bomb before she sells it to a ruthless Bobby Cannavale. 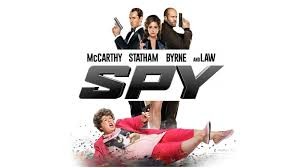 Susan’s explicit instructions are to “track and report.” As you might guess, that’s not her style. The rest of the picture is a lovingly-executed, action-comedy, which, by playing for keeps (lots o’ corpses), keeps the playfulness front and center.

McCarthy, whose timing and wit is essential to the film’s appeal, has been reunited with Paul Feig. He previously directed her in “Bridesmaids” and “The Heat,” both of which honed her feisty, foul-mouthed persona. “Spy” ultimately showcases that crowd-pleasing side of her, too.

But here’s the smart move:  McCarthy plays the film’s first half frumpy and meek — the Office Good Sport. One of the funniest running gags is the assortment of demeaning covers she’s given: a single mother of four relocated to Delaware to increase software sales or a divorcee with ten cats who sells protein shakes.

Even better are the gadgets handed her by the Q-surrogate: Hemorrhoid wipes containing chloroform or anti-poison pills in a stool softener bottle. Isn’t that what a middle-aged woman on her own in Europe would take with her?

That’s the canniest aspect of “Spy.” It has a nifty feminist streak that’s borderline mean, but mostly just whip-smart hilarious. Yet, the picture isn’t necessarily gender specific. The seemingly inept, under-estimated desk jockey who proves amazingly adept in dangerous situations is the sort of role any number of SNL graduates could’ve (or did) play when transitioning to movies. Think Chris Farley, Dana Carvey, Jim Belushi. Or, reaching back a bit, it’s the set-up for any given Danny Kaye picture.

Considering McCarthy’s proven appeal, plus the retinue of talented actors surrounding her (add Jason Statham, sending up his own tough-guy parts and Peter Sarafinowicz as a handsy Italian agent), “Spy 2” not only seems inevitable; it seems welcome.