In Steve Walton’s lights, holidays on the edge 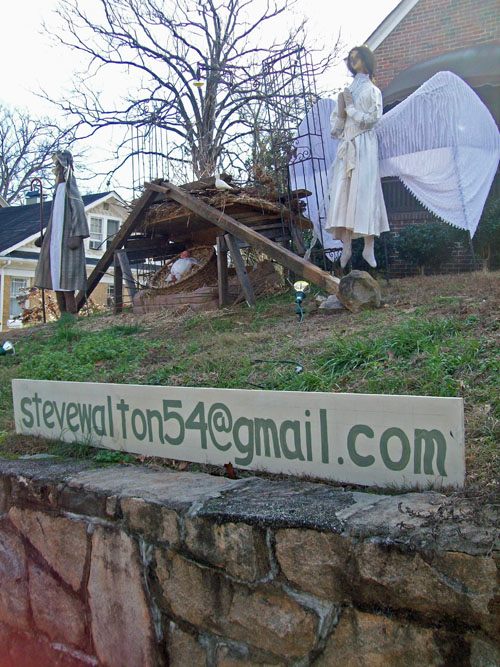 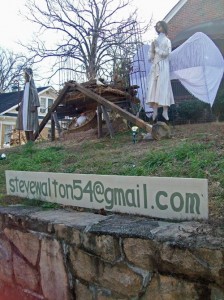 Steve Walton’s Christmas display around his Virginia Highland bungalow features a manger and baby Jesus without mom and dad, a monstrous snowman’s head and the effigy of an elderly woman who apparently got run over by a reindeer.

There are no flashing holiday lights, dime store decorations or blow up Santas. His displays are funny and edgy, sometimes quite dark and suggestive of a sense of longing for an artist who has experienced considerable loss in his life.

That includes the loss of his job, his partner to AIDS and both of his parents, for whom Walton served as caregiver in their final years. Walton’s father, Sim, died of lung cancer in 2005. His mother, Claude, died of complications from Alzheimer’s disease in 2011.

He moved on with his life by turning discarded stuff into elaborate, seasonal lawn displays throughout the year, with a prominent invitation. On a big piece of plywood on the front of his sloping lawn is painted [email protected] 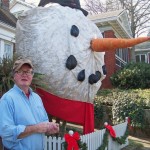 Not all of the connections have been positive, but even criticism is a chance for transformation.

A young mother asked Walton to take down monsters that rose from holes in the ground near his back alley. Her 2-year-old son was terrified.

“Instead, in those same holes I’ll put gingerbread men at Christmas, and leprechauns and bunnies at Easter, little sweet things to soothe the effect, so that little boy won’t always think of monsters being there,” said Walton.

Thus Walton’s menagerie of multiple holiday displays was born. He creates elaborate yard art displays for nearly every holiday on the calendar, from Martin Luther King Day to Cinco de Mayo, to Christmas. He even puts up displays for neighbors celebrating birthdays or new babies.

Walton’s been at it, with this intensity, for at least a decade, after spending years before that decorating his yard at Halloween. When he suffered his first major loss, things changed. 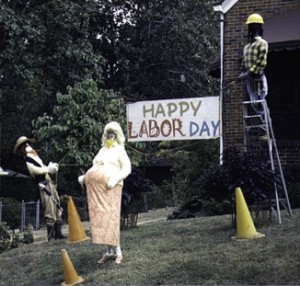 On Labor Day, a pregnant mannequin joined the tableau.

In 1989, Walton’s partner of seven years died, and the experience pushed him outdoors to work through his grief, he said.

“I really got involved in outdoor landscaping after Tim died,” said Walton. “I started to see the yard as a palette, not a chore. It was very therapeutic.”

He had the talent and the training to produce something no one had seen before. He said he could draw cartoons off the TV set before he could talk, majored in art at Georgia State University and later worked as a graphic artist as one of the pioneering staff members at The Weather Channel.

He drew from his love of old B-movies such as “Attack of the 50-Foot Woman” and “The Brain that Wouldn’t Die” to create outlandish Halloween yard displays in front of a home in Marietta he lived in back then.

In 1997, in what Walton said came as a complete surprise, he lost his job at The Weather Channel. The position had been his primary source of friendship, camaraderie, community and a vehicle for his talent. Embittered, he opted out of seeking corporate jobs for a while because he felt his anger was coming through in job interviews. 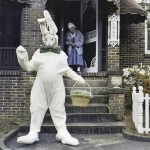 Walton’s mom, Claude Walton (in doorway) during Easter. He cared for her until her death from complications of Alzheimer’s disease in 2011.

Two years later, Walton sold his house and moved in with his parents on Amsterdam Avenue. He did landscaping work to make money and established his yard decorating tradition there.

Meanwhile, Walton’s parents’ health declined. His mother appeared to show symptoms of dementia before her husband died. Afterward, she declined.

“She couldn’t be left alone. She’d call 911 and tell them I’d been beaten or electrocuted or some other wild story,” Walton said. “She would imagine people inside our house stealing things. I couldn’t go out with friends. If I got someone to sit with her, when I got back they tell me, ‘It’s been a constant terror.’ ”

He translated that in his front yard: a Halloween display of demon-possessed Linda Blair tied to a bed.

Besides his squashed grandma, he’s turned a mannequin into a very pregnant lady who starred in a Labor Day tableau. He’s recreated a trio of groundhogs (Gen. Beauregard Lee, Punxatawney Phil and Pierre C. Shadeaux) for Feb. 2, and Frankenstein and his bride hooked up to an elaborate (but not electrified) wiring system. On the MLK Holiday, the likeness of King stands under a sign to Ebenezer Baptist Church and holds a giant “I Have a Dream” placard. 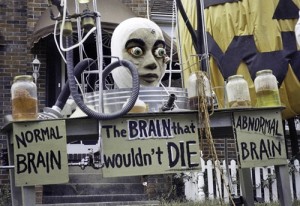 Halloween display, inspired by Walton’s love of B movies

Connecting with passersby reminded him he was not alone— that even though he was losing those he loved, he was creating something that mattered to those who were still around.

Walton discovered this when a card came from a recently widowed neighbor, thanking him for the giant Halloween display.

“I have to drive up your street every morning just to get my smile for the day,” she wrote.

As Walton recalled the story, he held back tears. There is a sweetness to his life that contrasts with the sometimes ominous look of his displays.

His simple message of spreading joy through his creativity includes some humor.

One year he wanted an actress to portray a Halloween witch as part of his lawn tableau, and his search took him to a Facebook page for actors looking for work. 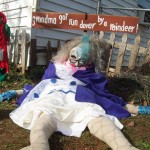 Grandma fared poorly in an encounter with Santa’s steeds.

“Need only sit in rocking chair and interact with children,” Walton’s ad said.

On Cinco de Mayo in 2009, Walton put surgical masks on the figures standing in his front yard, a humorous, though morbid nod to a swine flu pandemic sweeping through Mexico that year. Walton worried he might have pushed the borders of good taste too far.

Instead a stream of passersby stopped to take pictures. The next morning, he found a card from a CDC epidemiologist asking for a photo that she could use in a lecture.

“I wondered if people were going to be offended,” Walton said. “Instead, they asked me if they could put it on their Facebook pages.”