In a region still wracked by the lingering recession, metro Atlanta leaders are escalating the conversation about poverty in the suburbs. 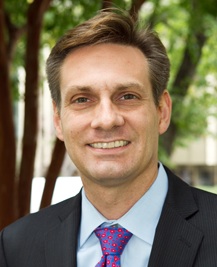 At the Atlanta Regional Housing Forum’s quarterly meeting Wednesday, a senior fellow with the Brookings Institution drew a bright line under a grim statement reported by the ARC in February: “Metro Atlanta had the highest percentage-point increase in suburban poverty among the 20 most populous metro areas in the nation.”

On a related point, MARTA GM Keith Parker said last week that the dip in MARTA ridership has coincided with the quest for affordable housing that has prompted long-time transit riders to move from the urban core to the suburbs. Once there, the former transit riders find other means of transportation, Parker said at an Aug. 30 meeting of Georgia Stand-Up.

Also on Wednesday, the Atlanta District of the Federal Reserve noted that economic conditions improved slightly from July to mid August, with most businesses reporting a positive outlook for the remainder of the year. Nationwide, the Beige Book released Wednesday, outlined an economy that’s improving moderately.

Alan Berube, the senior fellow at Brookings who spoke at the housing forum, said the nation’s safety net is not built to accommodate suburban poverty. Consequently, local leaders will have to figure out new approaches to help the working poor and those in poverty – and their children.

“There is a complex, multifaceted, varied set of dynamics playing out in the suburbs here and nationwide. This environment is not where federal policy tends to shine,” said Berube, co-author of “Confronting Suburban Poverty in America” (Brookings Press, 2013).

Atlanta’s close-in suburban counties registered significant increases in the rate of suburban poverty. Click on the map for a larger version. Credit: ARC

But it is an environment where local leaders can set a path to a better tomorrow by working together and sharing good news, according to Bill Bolling, the forum’s moderator and founding executive director of the Atlanta Community Food Bank.

“We have to celebrate our collaborative efforts … it’s incumbent upon us to do a better job of telling our story,” Bolling said toward the end of the meeting.

Bolling has been increasing his call for greater coordination among the public and private entities that provide care for those in need. It’s an approach that Berube said is making a positive difference in metropolitan areas around the country.

And it’s an approach that Brian Lackey, planning director for Gwinnett County, said is coming to the forefront in Gwinnett. 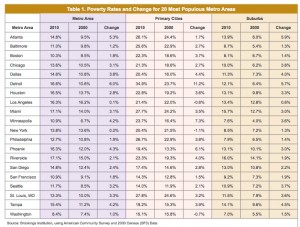 Metro Atlanta leads the nation in terms of the growth rate of poverty in the suburbs. Click on the table for a larger version. Credit: ARC

Lackey cited challenges – which he called opportunities – that range from the need for bridges to link the jobs and homes in Gwinnett and Fulton Counties; to the poverty facing those who moved from the Northeast to Gwinnett in search of better jobs and a better lifestyle, only to become jobless; to the loss of the transit projects that would have been built in Gwinnett if the regional transportation sales tax had been approved.

“Even with all that, there are a lot of opportunities,” Lackey said, saying that Gwinnett residents are coming to realize that issues are not unique to one city or another, because they are evident throughout the county.

Kim Anderson, CEO of Families First, said she sees the challenge as one of leadership.

Families want to address problems related to poverty, but some of them don’t have the capacity to address the problems. And the well-known issues of Atlanta’s urban core – education, unwed teen pregnancy, affordable housing – are now clearly in place in Atlanta’s suburbs, Anderson said. The leadership for the issue has to be identified, she said.

Milton Little, president of the United Way of Metropolitan Atlanta, said at the end of the meeting that he is hopeful because of the strength and vision of the caregivers who had assembled in the room to hear the presenation.

“My great optimism is that I get to work with all of you, who have great hope, ambition, ideas,” Little told the crowd of perhaps 100. “Let us not be daunted, but inspired by those who believe that fairness and opportunity ought to reside at every doorstep. Let us just stay the course and things will work out in the end.”