Editor’s Note: This is the second story in our three-part series on Georgia’s sustainable food movement. The series concludes Thanksgiving Day with a visit to a farm-to-table wedding.

People should be allowed to grow food for their own consumption on their own property. At least, that’s the theory behind legislation pending in Atlanta City Hall and the Georgia General Assembly. 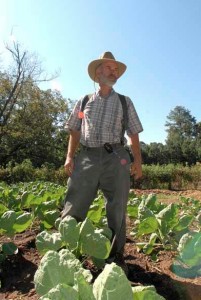 Proposed legislation to allow growing food for personal consumption would not have extended to Steve Miller, the “Cabbagegate” farmer in DeKalb County charged in 2010 with running a farm in violation of zoning codes. Credit: foodfreedom.wordpress.com

“Especially during these hard economic times, people ought to be able to raise their own food in their own yard,” said state Rep. Karla Drenner (D-Avondale Estates), who sponsored House Bill 618.

The legislation regarding true backyard farming is just one of several policy issues that now face Georgia’s sustainable and organic farmers. Others include poultry processing, and safe-food regulations covering the use manure as a fertilizer.

These aren’t the topics that tend to garner a lot of public attention.

Many a backyard vegetable patch and bee hive go unnoted. Chicken coops may raise a few eyebrows, but debate tends to go viral only if the birds are killed in a ritual. The use of manure as fertilizer isn’t much on anyone’s mind when they buy produce at the local farmers market.

But these issues are cropping up as the farm-to-table movement gains steam and the nation seeks to increase the security of food sources.

Drenner’s bill would set statewide standards for backyard food gardens and enable local authorities to enforce ordinances governing public nuisances. Currently, each county and city can set its own standard, usually through zoning codes. Atlanta’s proposed legislation intends to lower the permit fee for urban food gardens on undeveloped lots and is slated to be discussed in NPU meetings in early 2014.

Drenner said she picked up the bill after it stalled in the House in the 2011-12 session after being introduced by Rep. Earl Erhart (R-Powder Springs).

“A person in his district had cancer and wanted to raise chickens to eat eggs without antibodies having been added,” Drenner said.

The chicken processing proposal is being promoted by Georgia Organics. It’s intended to help small farms establish a niche in the state’s poultry market. Georgia’s poultry industry is dominated by large companies, as is the case nationwide. 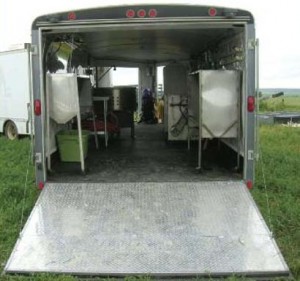 Mobile rigs like this one can process poultry on a farm. Credit: USDA

On the national level, one significant issue involves the first major revision of food safety laws since 1938. The Food Safety Modernization Act was signed into law by President Obama in 2011. It provided the Food and Drug Administration with additional powers to respond to food contamination and to prevent it, according to the FDA’s website.

The act has prompted a flurry of proposed regulations for commercial farmers, including one on the use of manure. This one, on potential microbial contamination of produce, goes to the heart of sustainable farming: 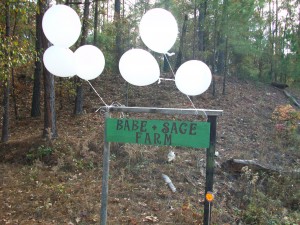 Read on Thanksgiving Day the final story in our three-part series on Georgia’s sustainable food movement. A farm-to-table wedding in Gordon features a surprising connection to Alabama. Credit: David Pendered

Manure is critically important to sustainable and organic farming operations, according to the National Sustainable Agriculture Commission. Georgia Organics has urged its followers to send their thoughts to the FDA during the comment period, which closed just last week.

Here’s what the NSAC says about the FDA’s manure proposal:

The FDA hasn’t announced on its websites a timeline for adopting these regulations. The site does say that all comments will be processed before rules are promulgated. And there are lots of comments from lots of interested parties.

For example, more than 17,000 comments have been received on another proposed rule that’s titled, “Standards for the Growing, Harvesting, Packing and Holding of Produce for Humans Consumption.” This provision prompted a self-identified organic farmer, from Pennsylvania, to submit the following comment regarding his thoughts on federal regulations of his barnyard cats: