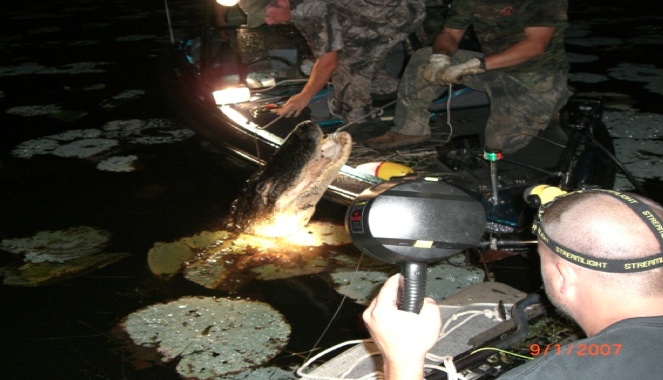 Georgia has opened applications for hunters who want to experience the alligator hunting adventures seen on “Swamp People.” 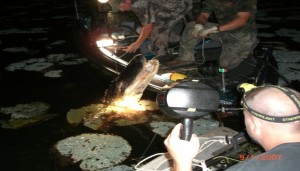 A gator is brought onto a boat in this picture from Coweta County Gator Getters. Credit: ccgatorgetters.com

There’s as much competition for a Georgia gator permit as there is for the actual lizard-like predator, which is the prey in the History channel’s hit reality TV series “Swamp People.” The show is in a genre similar to “Duck Dynasty.”

Georgia wildlife officials expect more than 10,000 applications for the 850 permits the state intends to issue this year. Hunters have killed 2,095 gators in Georgia since 2003, according to state records.

“We anticipate that alligator quota hunt application interest will be on par with past years, and expect more than 10,000 applicants,” said John Bowers, chief of the state’s Game Management Section. “If you have been fortunate enough to be selected for an alligator hunting permit, be sure to encourage friends and others to apply for the experience of a lifetime.”

Coweta County Gator Getters is one of the businesses advertises on the web its services for Georgia’s gator hunters.

The company charges $400 for a 12-hour, overnight hunting trip on Lake Seminole. That’s the price for the first hunter in a group and the fee for each additional hunter in the group is $150.

The average length of gators killed in Georgia is 8 feet 4 inches, according to the state. The record gator in Georgia was killed in 2013 and measured 13 feet 11 inches. Gator territory is south of the gnat line, which extends from Columbus through Macon to Augusts.

The success of the “Swamp People” TV show has focused some attention from animal rights advocates on the hunting of alligators for profit. Other concerns relate to the show’s depiction of the violent end of alligators. The show displays disclaimers that warn of the violence and observe that generations of hunters have killed alligators to sell their meat and hide.

It was the top-rated cable show in its time slot, raking in 4.2 million total viewers, with 2.5 million of those viewers in the demographic sweet spot of ages 25 to 54 years, according to broadcastingcable.com. The series’ fifth season concluded in June. 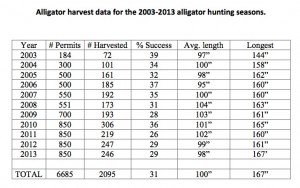 Gator hunting has gained popularity in Georgia, even as gators have become harders for hunters to locate and kill. Click on the chart for a larger version. Credit: Georgia Department of Natural Resources

Alligators no longer are listed as an endangered species and, actually, now are portrayed as an example of successful environmental stewardship.

The alligator population has recovered from losses caused by heavy hunting and loss of habitat that drove them toward extinction. In 1967, alligators were added to nation’s list of endangered species. The situation has improved.