An older and more subdued G. Lars Gullstedt returned to Atlanta last month to visit the place where his dreams were never fully realized.

Back in the early 1990s, Gullstedt, a Swedish developer who had turned his sights towards Atlanta, was on top of the world.

He had built a real estate empire in Sweden, and he was well on his way to transform Midtown Atlanta.

One Gullstedt monument was built in Atlanta — the 51-story building that is the home of the Four Seasons Hotel. When it opened in 1992, the building was a one-of-a-kind development known as the GLG Grand. 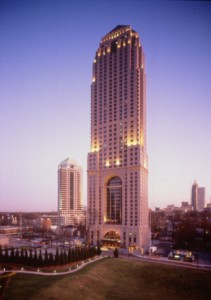 Rendering of what is now the Four Seasons before it was surrounded by other high-rise towers. Courtesy of Joe Rabun.

The multi-layered building, which sits on 14th Street between the Peachtrees, includes an underground parking garage, a hotel with a conference area, offices, apartments, townhomes, condominiums, an athletic club and penthouses.

Gullstedt and his wife returned as hotel guests at the Four Seasons three weeks ago, the first time he had been back to Atlanta in more than a decade. We met for breakfast along with Joe Rabun, the architect of the GLG Grand and a key planning partner in Gullstedt’s other Atlanta ventures.

During our visit, Gullstedt said he was particularly touched when the general manager of the hotel told him: “Your vision built a castle for us. Thank you.”

But it’s the castles that he was unable to build that still haunts Gullstedt.

In one of the most extraordinary real estate plays in Atlanta history, Gullstedt managed to buy 51 parcels from 39 different owners to assemble 11 prime acres in Midtown along Fifth Street — stretching from Peachtree Street to the Interstate. 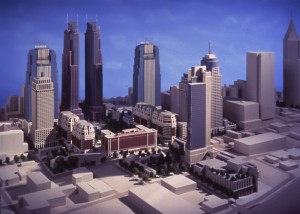 Rendering of proposed GLG Park Plaza Plaza development with the Atlanta Biltmore in the foreground. Courtesy of Joe Rabun.

Much of the property belonged to the First Baptist Church of Atlanta, which wanted to sell its extensive land holdings so it could move to a larger site in the suburbs.

And Gullstedt, cloaked in the mystery of being a secretive Swede, then began buying other parcels around Atlanta’s historic Biltmore Hotel.

Then, in July, 1991, Gullstedt went public with his vision for a grandiose GLG Park Plaza development with two 65-story towers and several other high-rise towers bordering a new city park with a restored Biltmore as an anchor.

The multibillion dollar project was expected to take about 15 years to be fully realized. 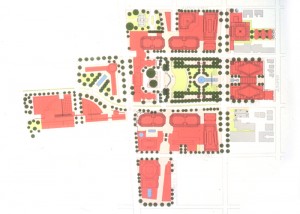 The development was announced with great fanfare at City Hall with Gullstedt and Atlanta Mayor Maynard Jackson holding court. Gullstedt remembered Jackson announcing that this would be the best development in Atlanta, better than New York’s Rockefeller Center. 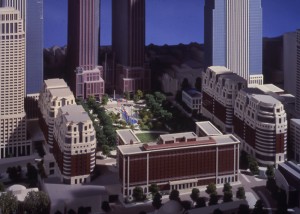 To fully appreciate the vision, one must remember that in the early 1990s Midtown Atlanta had far ‘more surface parking lots and under-used low-rise buildings — especially in the area south of 10th Street — than it had high-rises.

Gullstedt immediately became one of the most intriguing characters to enter the local scene — an outsider who saw potential in an area that had been overlooked by Atlantans.

But on June 30th, 1993, Gullstedt’s world entered a black hole. A credit crunch in Sweden led to Swedish banks calling in the loans they had made to Gullstedt. Because so much of his money was tied up in real estate, Gullstedt was unable to pay off the loans.

So the managing director of one the banks told Gullstedt that they were declaring him to be bankrupt, which led to them taking ownership of all the Atlanta land that had been assembled.

Worst than that, the Swedish government then began an investigation on Gullstedt’s operations and accused him of insurance fraud. He was arrested in 1997.

The sordid details of his rise and rapid fall are outlined in a book that he wrote in Swedish three years ago: “When the Bank Helped Itself.”

A condensed English version has just been published, and Gullstedt brought copies to Atlanta on his recent trip to set the record straight.
According to the book, he was cleared of all wrongdoing, but by that time it was too late. He had lost his real estate empire and his reputation. Also, in Sweden, once you’ve entered into bankruptcy, you can’t go back in business.

The book recounts how he started as a kid living and working on a farm in Finland; built a construction company and later a development firm, becoming a billionaire and one of the richest men in Sweden who dined with kings and queens (literally). And then his fall from grace.

“The banks took everything,” said Gullstedt, who is now 74. “It’s very difficult to start again.”

Gullstedt’s visit to Atlanta was bittersweet. He was impressed to see the amount of development that’s occurred in Midtown since he was last here. In many ways, his vision for Atlanta was realized despite his disappearance from the scene.

“It’s fantastic,” Gullstedt said while pointing to all the new buildings around the Four Seasons. In fact, his son, Michael, had warned him that it was now hard to see the former GLG Grand on the skyline. “There are so many nice buildings.”

As to his former land holdings, Georgia Tech has built its eastern campus on some of the blocks Gullstedt used to own. And several developers have been able to buy and develop the land that Gullstedt had assembled along Peachtree more than 15 years ago.

Although Gullstedt was unable to participate in Midtown Atlanta’s rebirth, he found comfort in seeing a transformed Midtown during his recent visit.

Rabun said that Gullstedt believed in Atlanta’s potential. In the early 1990s, Gullstedt understood that Atlanta was destined for growth as a key aviation hub in the United States. And he had wanted to be part of that growth.

Previous Article
Maintaining Atlanta’s parks — it’s the best of times; worst of times
Next Article
After taking time off, it’s time to get back to work