Georgia’s leaders in sustainability recognized achievements and outlined aspirations during their Oct. 28 celebration of the 76th anniversary of the founding of the United Nations. 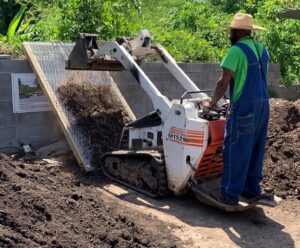 Truly Living Well has established a community-based composting program that could reduce landfill methane and provide a soil amendment to growers. (Photo by Kelly Jordan)

By chance, the event occurred as global leaders gather in Scotland for a climate conference that began Sunday. The primary purpose of COP26, the U.N. Climate Change Conference, is to affirm goals to reduce climate warming. President Biden unveiled a $1.75 trillion budget Oct. 28 he said can pass Congress and provide $555 billion for clean energy and climate programs.

Laura Turner Seydel, board member of the U.N. Foundation, sounded a hopeful note Oct. 28 in pre-recorded opening remarks at U.N. Association Atlanta Day, which was dedicated to Drawdown Georgia.

“Georgia will be the first Drawdown state to put solutions on the ground, right here in our backyard, to reduce harmful greenhouse gas emissions,” Seydel said.

Drawdown Georgia is based on a national model, Project Drawdown. The Ray C. Anderson Foundation provides significant support for the Georgia initiative. The organization began in October 2020 with academic partners seeking scalable projects to reduce carbon emissions in Georgia. Influencers have since joined, including the Rev. Gerald Durley; Roy Richards, of Southwire; Nathaniel Smith, of Partnership for Southern Equity; and Katharine Wilkinson, of The All We Can Save Project. Four business partners shared their views on sustainability Oct. 21 in an inaugural webinar. 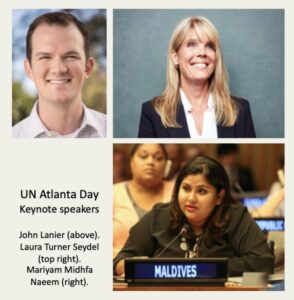 Seydel cited six ideas that have captured her attention, from among the 20 created by Drawdown Georgia. Topics include societal issues in addition to climate change:

John Lanier, executive director of the Anderson Foundation, said the academics working with Drawdown Georgia have delivered useful results. Lanier is the grandson of Ray Anderson, who founded the Interface flooring company and used the ensuing wealth to support environmental efforts.

Lanier noted that the success of Drawdown scientists includes their identification of ideas that are not as viable in Georgia as in other states. 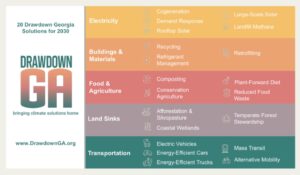 Drawdown Georgia has identified 20 solutions that 11 scientists think could help Georgia significantly reduce its carbon emissions by 2030. (Image from drawdownga.org)

“Drawdown Georgia is our answer to that,” Lanier said of efforts to find measures that do work in Georgia. “Our foundation was honored to fund research across the best academic institutions in our state. Within a year, they showed which climate solutions work best in Georgia — 20 high-impact ideas.”

Drawdown Georgia published its first study Aug. 3 in “Proceedings of the National Academy of Sciences.” The 11 scientists involved represent Emory University, Georgia Tech and the University of Georgia. The report contends the 20 solutions identified could be established in states other than Georgia. These solutions have the potential to “cut Georgia’s carbon footprint by 35 percent in 2030 relative to a business-as-usual forecast and by 50 percent relative to Georgia’s emissions in 2005.”

The challenge is to implement these types of ideas, according to, Mariyam Midhfa Naeem, a deputy chief for the president of the U.N. General Assembly. Naeem began her remarks as honorable keynote speaker at the U.N. event in Atlanta by noting the concerns of sea-level rise that face the Maldives, the island nation of origin for both Naeem and the UN president.

Naeem closed her comments by looking to the era after COP26.

“Yes, we go to Glasgow with lots of hopes, raised ambitions,” Naeem said. “But it is what we do after Glasgow that translates the decisions we make into action. It is up to us to make sure that action remains high and action is taken. Let’s work together for the all-blue planet and all the life on it.”