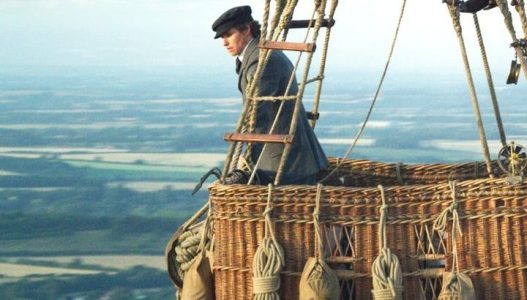 In the “The Aeronauts,” Eddie Redmayne and Felicity Jones take us up, up and away in their beautiful hot-air balloon. It’s a trip you don’t want to miss – especially on the big screen.

The year is 1862 and scientist James Glaisher (Redmayne) is a man with a plan.  He thinks it’s possible to learn how to predict the weather and, by doing so, make ship travel safer, farms more productive, that kind of thing. The Royal Society of Bushy-Bearded Pundits – or whatever they call themselves – thinks he’s nuts. The next thing he’ll say is that women should join their ranks. 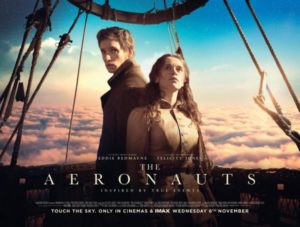 A poster for “The Aeronauts”

Not quite, but close. In order to carry out his experiments, he enlists aeronaut Amelia Wren (Jones) as his co-pilot. She’s initially reluctant because she lost her husband when their hot-air balloon tumbled out of the sky.

But as a widow, she doesn’t know what to do with herself.  About all that’s available is a life in society, which she doesn’t want. You have to learn to want it, her more traditional sister insists.

Balloons or ballrooms? For Amelia, the choice is obvious. So, with a festive crowd of 10,000 watching, the pair takes to the air. Ultimately, they float to a height of seven miles above the earth. But the trip, which takes up the bulk of the movie, is hardly smooth sailing.

There are terrifying storms, altitude madness, freezing temperatures that impair the equipment and frostbite that attacks their hands and feet. In one breathtaking scene, Amelia must climb to the top of the balloon to make crucial life-or-death adjustments.

Their flight is punctuated with flashbacks to remind us we are in Victorian England and to show us how the two managed to team up. The scenes are ok, but the money shots are all up in the clouds and they are spectacular. This movie is as good an argument for seeing something on a theater-sized screen as I can imagine.

The script can be earthbound at times, but not in an irritating way. It has a bluff old-fashioned adventure spirit that recalls those early ‘60s adaptations of H.G. Wells and Jules Verne: “The Time Machine” with its Morlocks or “Journey to the Center of the Earth” with Pat Boone and a goose. 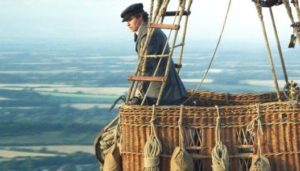 A scene from “The Aeronauts”

Redmayne and Jones are delightful together, almost like Hepburn and Bogart in “The African Queen.” If he sometimes takes a back seat to her flashier character, it’s almost as if he owes her. After all, she dutifully supported him when he won an Oscar for “The Theory of Everything” (She was nominated).

Again, “The Aeronauts” is not an especially sophisticated film.  If you’re looking for the next Andre Tarkovsky, it’s not the team of director Tom Harper and screenwriter Jack Thorne. But the picture is an appealing, often exhilarating experience. I mean, can you really resist a protagonist who makes her entrance in a spangled tutu, standing on top of a stage coach, with a Jack Russell terrier in her arms whom she later tosses out of the balloon basket once they’re aloft? (Not to worry; he has his own parachute)

It should be said that, Wren is a fictional character, an amalgamation of a number of female balloonists from that period. Glashier actually made his death-defying ascent with a gentleman named Henry Coxwell. The gender-swap isn’t fair, but it is certainly entertaining. Redmayne and Jones have an intoxicating chemistry.

At the end, they thank each other “for taking me up in your balloon.” I thank them both. You will, too.