Scene from "The American Dream and Other Fairy Tales"

Sometimes a documentary sets out to tell you one thing and unwittingly ends up telling you something entirely different. 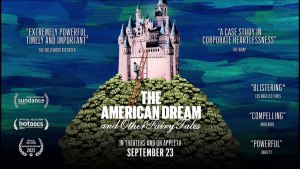 Movie poster for “The American Dream and Other Fairy Tales”

Think of “Capturing the Friedmans” and its toxic brotherhood or “The Queen of Versailles” with its misguided would-be “queen” of central Florida.

Something of the same thing happens with “The American Dream and Other Fairy Tales,” in which Walt Disney’s great-niece, Abigail Disney, tries to take on the sins of the Magic Kingdom.

Abigail Disney is a conscionable woman who’s clearly uncomfortable with her accidental good fortune. She has nothing to do with Disney corporate aside from reaping the considerable financial benefits of her family connection. As she puts it, “Having the last name Disney is like having a weird super-power you didn’t ask for.” 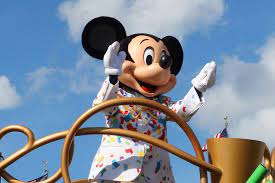 A Disney icon in the documentary: “The American Dream and Other Fairy Tales”

An activist and philanthropist, Abigail Disney is moved to action against, well, Disney after being contacted by a veteran employee at Disneyland who, after 10 years, is still struggling to make ends meet. No wonder. He makes about $15 an hour and lives near the park in Anaheim where a living wage would be about $24 an hour.

So, Abigail contacts the company’s then-CEO, Bob Iger, whose salary is around $65 million. He suggests she contact human resources. He doesn’t exactly blow her off, but you sense he almost expects to hear something like this from someone like Abigail.

Instead, Abigail gets in contact with various “cast members,” as employees at Disneyland are called (whether you’re a Disney Princess or scrub the magic dust off the toilets). And she makes this documentary, which pretty clearly delineates the increasing gap between the haves and the have-nots. For instance, it would take your average cast member about 2,000 years to make what Iger makes. Scene from “The American Dream and Other Fairy Tales”

The picture benefits from evocative archival footage. Could anyone be any happier than the little kids lining Main Street circa 1965? And Abigail’s passion is both unmistakable and, in its privileged way, fearless.

But “privilege” is a key word here. Abigail can afford to play Fairy Godmother. Watching her worry about workers’ rights from her lovely kitchen has a built-in irony. She’s certainly not a clueless do-gooder, but she can come close – like those well-meaning Hollywood wives who once organized aerobics classes for the homeless.

It’s also worth noting that Ralph, the cast member who first contacted her, initially shows up wearing T-shirts that plug various Disney franchises, like the Marvel Cinematic Universe. By the movie’s end, he’s wearing one that plugs his new employer: Knott’s Berry Farm.

Previous Article
It Takes a Village: Community Science helps birds and people, too
Next Article
His request has been honored