The Conclusion to the Peoplestown Decade of Resistance

After a 10 year fight, the Peoplestown saga has reached a conclusion.

In 2012, catastrophic flooding in the legacy neighborhood of Peoplestown started what would become a long battle between residents and the city. Then-mayor of Atlanta Kasim Reed promised that no residents would have to move, according to resident Bertha Darden.

That promise soon changed, and eventually a block of 30 homes was cleared to make room for a water retention pond that would alleviate flooding issues in the neighborhood. Against threats of eminent domain, most residents settled with the City of Atlanta and sold their homes to eventually be demolished. Those who remained became locked in an intense legal battle against the city.

Last month, the City of Atlanta put out a press release which said settlements had been reached with the remaining homeowners.

Mayor Andre Dickens previously promised that the remaining families of the block would stay in their homes on the campaign trail for the mayoral election. It echoed a promise that neighbors allege former Mayor Kasim Reed made when the floods in 2012 started the ordeal. 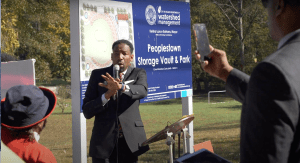 In the same press release, Mayor Dickens expressed his gratitude towards the families for their cooperation.

“I know these families wanted to stay in their homes, and I am grateful for the sacrifice they are making for the larger community and our city. I thank the City Council for their partnership throughout this process and their support of these agreements,” Dickens said.

One of the remaining residents, Tanya Washington, explained what ultimately helped put the matter to rest despite her disappointment in the outcome, according to the press release.

“For nearly 10 years I have maintained, with my neighbors, a desire to stay in my home on Atlanta Avenue and in my beloved community of Peoplestown,” Washington said. “It is clear that the City will move forward with its plans and that makes it reasonable to seek a satisfactory resolution.”

Washington also acknowledged Mayor Dickens for his role in the ordeal — meeting with the families to find a solution where the families could stay in their homes, though that never came to be.

“My disappointment is curbed by the respect and integrity Mayor Dickens has shown in how he has dealt with us and this issue he inherited… I am at peace with this outcome and grateful to Mayor Dickens for his role in achieving a mutually respectful result,” Washington said.

Washington feels that the level of respect Mayors Dickens had for the families was shown by his meetings with residents multiple times and maintaining open communication, something that was lacking from former mayor Reed.

Other neighbors echoed the validation in being seen and heard made a huge difference, even if it led to the same outcome.

The Peoplestown neighborhood saw a fair share of media attention in recent years. It also received backing from groups like the Housing Justice league, a self-described “grassroots organization that builds power in Atlanta to preserve affordable housing, prevent gentrification, and support tenant organizing.” 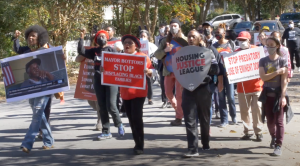 Residents of Peoplestown protest eminent domain in the area that would remove families from their homes. (Photo by Mark Lannaman.)

“The remaining residents have reached a settlement with the City of Atlanta that will allow them to leave with dignity, on their terms, and with enough resources to start the next chapter of their lives,” The Housing Justice league said in a Twitter post.

Allision Johnson, executive director of the Housing Justice League, says she is at peace with the outcome while acknowledging it’s not the one she had hoped.

Johsnon, whose family has lived in the neighborhood for generations, hopes the resistance sets a precedent.

Johnson too is satisfied with the job of Mayor Dickens — the third mayor after Kasim Reed and Keisha Lance-Bottoms to be in office during the ordeal — while also wishing he would have done more.

“We do wish the mayor would have gone a little deeper and found alternatives other than monetary settlements and displacement,” Johnson said.

Johnson feels the promise of “no family will have to leave” on the campaign trail being broken highlights how crucial the work is of the Housing Justice League and others like it.

“I don’t think [promises being broken] scares us, but what it does is really validate the need for self-advocacy,” Johnson said. “To some people who aren’t advocates, who don’t understand all the different processes of eminent domain encompasses, it leaves them a little more vulnerable. [So] what we want to say to people is that if you stand up and use your voice and advocate with different coalitions to fight for your homes, you’re going to have better outcomes”.

The resolution and future of the site

The city plans to move forward with the demolition and subsequent construction of a retention pond, engineered to alleviate flooding in the area that has been plagued with overflowing sewers. 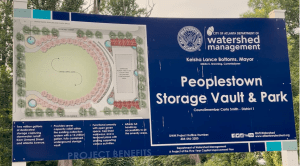 Similar retention ponds have been constructed around the city, like Rodney Cook Sr. Park in Vine City and Old Fourth Ward Park . Their respective areas were plagued with flooding and sewer overflows as well before the retention pond.

As climate change brings more severe weather to areas that weren’t built to withstand it — especially areas that have historically been neglected by the city — these kinds of developments could become more common  and potentially harmful to legacy residents.

“We’ve watched this happen over the last 10 to 12 years because the city and other people have not valued the people that already exist in communities…” Johnson said.“I’m not hopeful that things are going to change unless, unless we continue to fight for those changes.”

These changes are something the Housing Justice League and other organizations will be monitoring in order to ensure legacy residents and renters are seen and heard by the city going forward.